Say what you will about Kickstarter the crowdfunding website that allows creators to offer up cool stuff in exchange for supporting their projects. Kickstarter has done a great job at promoting their “hit-worthy” projects.

A 1980’s based nostalgic action/comedy entitled Kung Fury raised over $630,000 via the crowdfunding platform. Kung Fury was recently let loose to the web and in only five days the 30-minute martial arts, Nazi slashing, dinosaur riding, and time traveling film has already received over 11 million views on Youtube.

If the film did not quench your thirst for going back to the 80’s there’s now a game! Kung Fury: Street Rage.

Get blown into another dimension as you experience the gut busting fun of the KUNG FURY: STREET RAGE game. Beat the nazis to stop Kung Führer and uphold the law! BECOME THE ACTION! BECOME KUNG FURY!!!! Street Rage is now available  on Android,IOS, and  $1.99 on Stream.

Street Rage is not incredibly profound or new, although the character and visuals make it enjoyable to play. Street Rage pays homage to great beat-em-up games like Double Dragon and Golden Axe. Honestly, I cannot believe how much I have missed the game play of beat-em-ups. Oh, the thrill of overcoming challenges! It was simple, fun, and I loved those glorious combo moves. 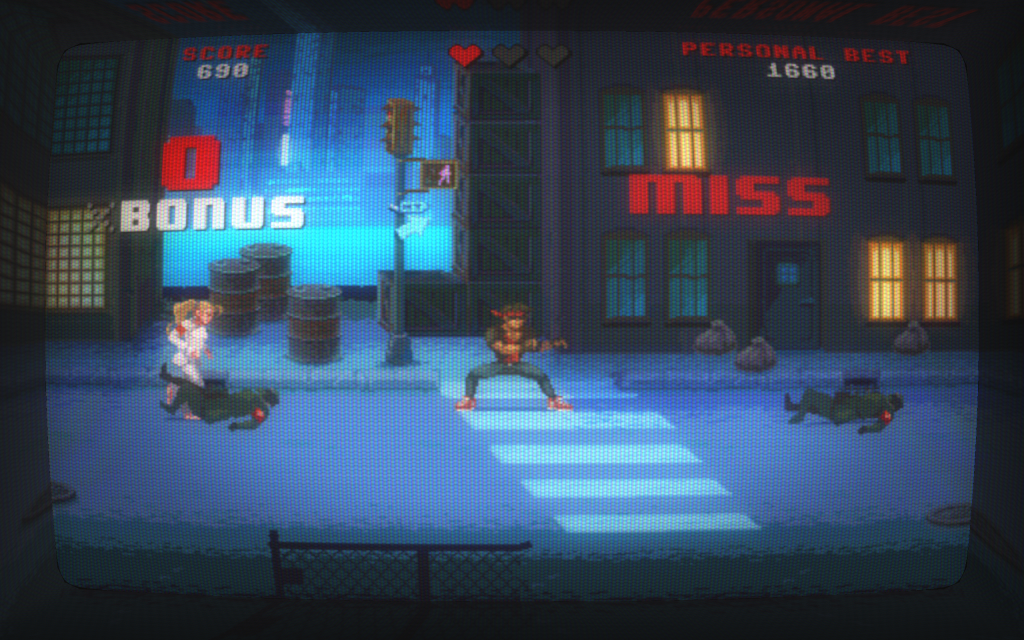 The game has been compared to One Finger Death Punch due to the fast paced arcade action style. Playing as the high-top wearing martial arts comedic cop Kung Fury. Kung Fury allows you to travel back in time smashing Nazis and his antagonist  Adolf Hitler, a.k.a. “Kung Führer”. Moving left to right kicking and punching with style any and everything in his way.

Street Rage doesn an awesome job achieving its beat-em-up style of game play and provides a sense of nostalgia. It, surprisingly, makes you feel as if your actually in an arcade playing.

Initially I was turned off by the  game controls – or lack thereof.  I thought tapping the screen rapidly would execute fatal kicks and punches. After more time I realized that I could do more than just tap the screen.  In fact there are actual movements and combos that players can bust out.

All things taken into consideration if you love Kung Fury or games like Double Dragon and Bad Dudes you will probably want to give Kung Fury: Street Rage a go. The game will distract you for hours on end and allow you to be the action hero you always dreamed of being. What do you think of the game? Let us know by leaving comments below!