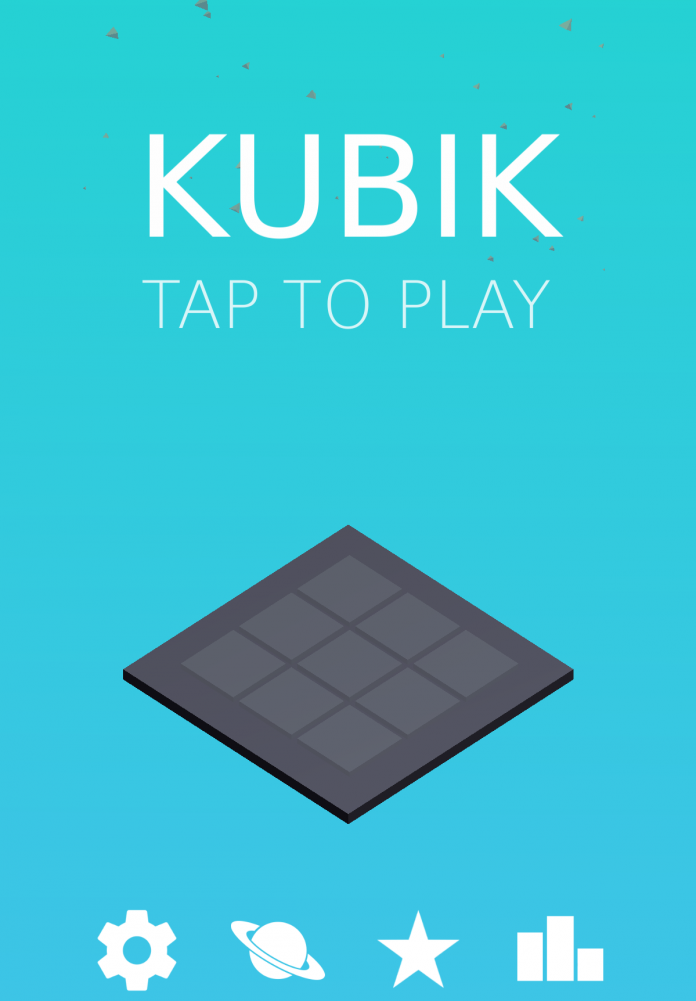 OK, a show of hands: Who here has never heard of Tetris?
Nobody? Thought so.

Now, another show of hands: Who here can’t just play a single game of Tetris, but instead quickly become convinced that the turn on it will be the all-time high score. Ah, right again.

We are light years beyond Tetris’s heyday, but the basic principle still has plenty of appeal: a simple game with simple mechanics, lots of colors, short but repeatable gameplay, and even some social appeal (“I can do better than you can!”).

Enter Kubik, a game from the developer Ketchapp Games. Sight unseen, consider it a slimmed-down, 3D version of the ever-popular Tetris. The game is very family-friendly (though younger children may struggle a bit with the 3D spatial relations involved to play) but adults would also enjoy this title, too.
Ketchapp Games has dozens of games available on the Play Store, including “Don’t Step on the White Tile” (a game my kiddos still pick up and play after more than a year later).

Setup is very easy; just download from the Play Store and enter the game. There 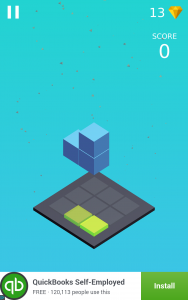 extremely little in the way of settings or options. Essentially you can turn the background music and subtle sound effects on or off, buy some of the premium world bases up front, and check the leaderboard. Other than that, it’s a big pulsating ‘TAP TO PLAY’ icon square in the middle of the screen to get you going.

Gameplay is very solid; it works just like the old Tetris, but with a 3D element added to it. You start with a bare 3 square x 3 square grid at the bottom. From above the screen drop down geometric shapes of various sizes and geometries (again these are essentially the same shapes that are in Tetris but with a 3rd dimension to them). 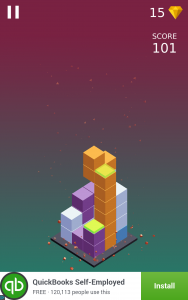 Your job is to spin the grid at the bottom using basic left and right screen swipes, lining up the shapes on top of one another to make the most efficient block tower possible. You want to leave air spaces at a minimum, as with them your tower can grow quickly. If it hits a certain height (shown by a super-imposed indicator).

I found the gameplay to actually be pretty easy. The speed at which this game moves is almost “slow”…..but it’s kinda nice respite from a lot of current games that put an almost-impossible expectation on your supposed cat-like reflexes (I don’t have any of those).

Additionally, the game also lights up the particular squares that the currently-falling block will land on. Rotate the floor, and it will update the squares that will be landed on. While this does assist in making Kubik kind of easy, it does do a great job in preventing the game from being unplayable, in my opinion. Trying to guess which squares would be landed on, only to be proven wrong again and again…..I would have uninstalled this game in short 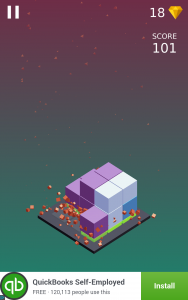 order. Thankfully that’s not the case at all here. If you are certain of the falling block’s location, a simple screen tap will speed it’s drop to full free-fall to get to the next piece faster.

The only real upgrade available is in the “world” that your floor happens to sit on. They don’t offer any strategic or performance enhancements, but hey, they sure are cute.

You can probably guess by now that I’m a fan of the visuals in this game. The colors are solid but a bit muted, and the motion throughout the game is buttery-smooth. It almost can lull you to sleep it’s so nice.
Which brings us to Kubik’s audio. There are very few and subtle sound effects (little ‘plinks’ and ‘dunks’ for game action. I think the background music is love-it-or-hate-it, as it’s has a twangy new-age/zen feel to it that will either have you enjoying yourself immensely or looking for that mute button. But in the end it does work for this game, as the overall feel isn’t hyper-competitive mayhem, but relaxed distraction.

I really enjoyed Kubik; it knows what it wants to be, and almost completely succeeds. My 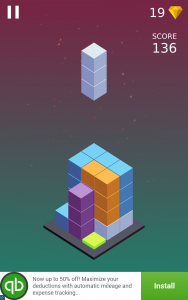 only personal want is to manually dial the difficulty up or down, based on the player or the mood. But other than that it’s a perfect Tetris alternative in this 3D, touchscreen world we’re living in.