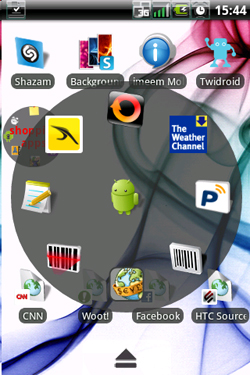 Launcher Dock is a new widget developed by Bratag for those who have the latest cupcake release on their Android phone.Â  Weâ€™ve seen a handful of news and system setting widgets pop up on the Android Market since the introduction of cupcake, but Launcher Dock is the first to give users an alternate to having folders.Â

On the home screen, just tap the Launcher Dock icon and a circular overlay will pop up that shows the applications you selected for it.Â  This little widget is in essence a simple alternative to the Android folder system already included on the phone. One neat feature the Launcher dock has over a standard folder is that you can flick it up or down and the little circle will rotate around.Â  Ok, that really does not add any functionality to the widget, but it shows that the developers went out of their way to make it just a little fun.

Iâ€™m hoping that in later releases, Bratag will increase the usability of the app by allowing users to drag and drop applications in and out of the widget and change the font color.Â  For now itâ€™s a great start.Â  Launcher Dock is a great little replacement for the Android Folder.

Become a master of sketching with Sketch Master (app review)