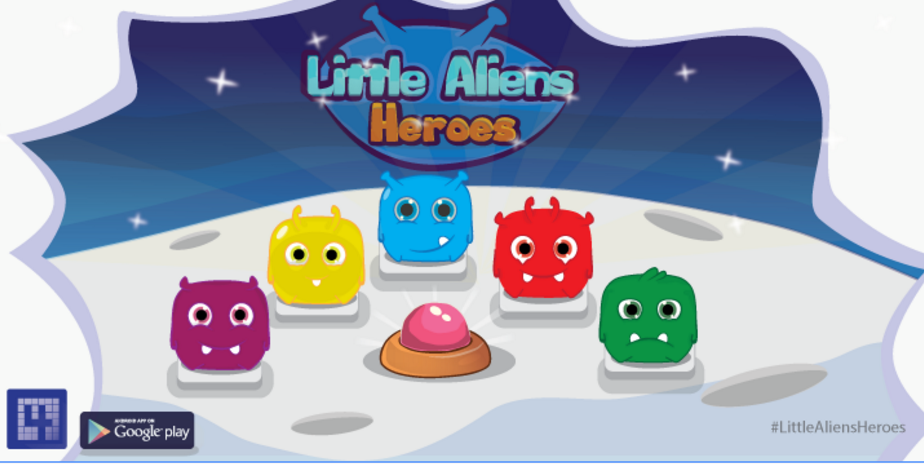 I hate match-three games. There I said it. From Candy Crush to Cookie Jam to Bejeweled to Dots, I had enough of them a long time ago.  So much so that I kind of forgot what they’re all about: Super-easy gameplay, colorful graphics, and a bit of strategy…thinking two steps ahead, while whittling away time on your device.

Enter Little Aliens Heroes, by 4YouPlay Game Studio. The premise is the same, with a couple of small level tweaks that make it somewhat fresh and challenging.

You can get the game by simply downloading from the Play Store. From there just fire it up, and off you go.

If you’ve played (or even heard of) the aforementioned games above, then you know what to do. Each level is a grid of squares, occupied by cute little aliens faces. There are over 130 levels, and your objective in each is to swap positions of two aliens to line up three of a like color. This eliminates those three or more aliens and allows the ones above to drop down and the top holes to auto-fill with randomly-colored new aliens. Each level’s goal varies as you progress through the game: starting out you are to amass a predetermined number of match-three’s by color (example: seven matches of blues and 11 matches of reds), and progressing to moving a unique static alien to the bottom of the screen (by removing match-three’s), among other challenges.

The graphics and sound of the game are a highlight, too, but not in how you think.  Usually, the term ‘highlight’ refers to a bright spot; something that really jumps out at you. In this case, I’m referring to the refined nature of the graphics, and the more subtle existence of the sound.  While both are of the candy-colored universe you would expect from such a game, both are muted enough that you can look at the screen for extended periods without much strain. In particular for me, the sound was “just enough” to let you know how you’re doing without becoming an all-out distraction.

If you get stuck, no worries, the game has some included help. The first is if you hesitate for a few moments, the game will subtly make an available alien throb, showing you an available next step. Also, along the bottom of the screen are several assists that can be ‘bought’ using coin you’ve amassed through the previous stages.

This game really surprised me, in case you couldn’t tell. I honestly started playing this game wondering what I could possibly tell you that hasn’t already been used to death by the myriad of other match-three games out there. And while there’s nothing groundbreaking about Little Aliens Heroes, the graphics, sound, and gameplay are unique enough to keep you playing long after you thought you would be.