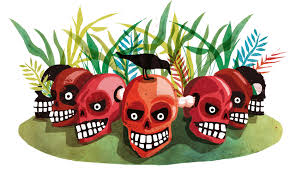 Ready for a completely different type of game to tickle your imagination? Cubus Games has just introduced its first line game book called Necklace of Skulls and it just might catch your eye. With first hand experience testing out this game, AndroidGuys is ready to brief you on the need to knows about this title. So sit back and enjoy the read – no pun intended. 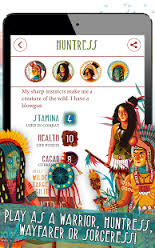 Necklace of Skulls is one of the few titles to add a spin to its mobile game play. It is now titled as a Game Book. Where as you don’t much play a game but read your way through a story and throughout you become faced with making your own character decisions on how to track your way through the adventure. There is a small one time fee of $1.99 which wasn’t bad considering the amount of content provided. Little did I know that the hefty majority was all reading based with not as many options I wish my character was able to make in his story line.

However Cubus Games did offer up to three simultaneous game story’s and saves so that you can choose any of the four characters and try your hand at playing multiple versions and story’s of the game. There is no tutorial on how to play or what items used in the game would be best in certain situations, but overall I was able to catch on after a bit of guessing.

I found myself knee-deep in thought through the entire game as my imagination became forced to run wild producing my own views on what the environment of the game world was like with no set direction to keep me on track. It did this because, although there was some very nice art work and sound effects, I found it was very seldom and in between that Necklace of Skulls jolted my imagination in the direction it needed to be to stay on track. With all the reading it kept me interested to continue the story and make decisions as a game instead of skipping through to just read the story line.

The sound track did become repetitive at times as it almost put me to sleep with its soothing environmental hims and sounds. As I worked my way threw the game I noticed there was a lot of the same in-game choices to be made without much of any real game play choices besides choosing the obvious game ending decision only to restart from the last saved chapter. Cubus Games also incorporated a gold system as the character you chose used this “money” to buy new items to use on the quest but did not give any options as to acquire much if any of it during the read.

There was a few times when I noticed I found myself staring at a blank white screen waiting for the text to appear for a little longer than normal. Also with the high level of reading and not much “game play” be ready to broaden your vocabulary. If your one for a good read and a decent story line then Necklace of Skulls is definitely worth a download. Just remember this title has brought a new genre to mobile gaming with its game book adventure so if you’re expecting an immersing 3D world of quests than you may find your self mistaken.

5 surreal indie games to try out this Christmas holiday