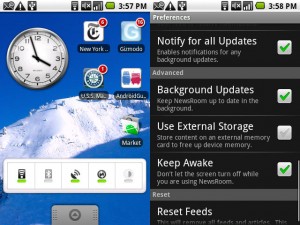 I recently learned of a new RSS reader for Android called NewsRoom.Â  Since I rarely rely on bookmarked websites anymore, I like to have content readily available via RSS.Â  While there have been a handful of great RSS apps released already, I decided to take a look anyhow.Â  I was pleasantly surprised by not only how fully featured the app was, but how great it looked at the same time.

If you’re in the market for a nice RSS reader, I definitely suggest checking out NewsRoom.Â  Among its features are background updating and offline access.Â  I am always running into dead spots where I work so it’s been very handy to know that if and when my connection returns, I don’t have to mess with anything.Â  Bonus points were awarded because AndroidGuys was listed as a featured feeds with a custom icons. Widgets are handled great; They can be configured so each feed has an individual icon on the desktop.

Other features found in NewsRoom:

You can download NewsRoom for $4.99 today in the Android Market.Â  There’s also a trial version that’s offered for free however, I don’t know what the difference is other than perhaps a time limit.Â  According to the product’s blog,Â  if you do switch from trial to full version, your feeds will not make the jump.

Speed up your Android phone with these eight essential tips