Nitro Dash is a fast paced endless runner that has you hijacking cars, running from the cops, hitting pedestrians and causing utter mayhem for as long as possible. Success is measured 1km at a time.

Nitro Dash is a breeze to setup. Simply download the game from the Google Play store, find it on your device and click the icon.

When you first open the game, you will be asked to approve certain permissions for the game. The permissions are needed for the game’s public scoreboard mechanic. If you are not comfortable granting these permissions, the game is still playable if you deny them. 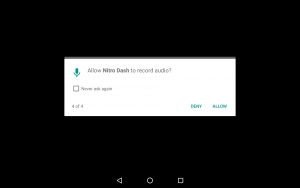 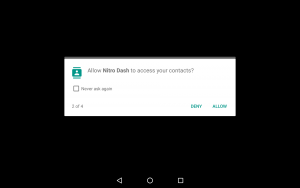 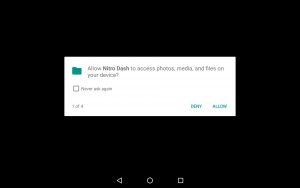 Nitro Dash’s gameplay has made this one of the most difficult reviews I’ve ever written. One minute, I love this game. The next minute, I hate it.

All three are seemingly the same each time. The only difference I really ever noticed was in the amount of traffic on the roads (and maybe the pedestrian count). Sometimes the traffic was light to moderate, while other times it was heavy to ridiculous. The roads could literally become so congested that you were lucky to even make it 1 km.

Your first obstacle to overcome in Nitro Dash is to not crash. Had this been Nitro Dash’s only obstacle, I probably would have given this game a perfect score. However, crashing is not your only concern.

Your vehicles in Nitro Dash lose consistent amounts of fuel as you drive. If your car becomes damaged, you will begin to lose fuel at an even higher rate. You’ve crashed your car once. The car is on fire, you’re one wreck away from an explosive death (cars in Nitro Dash can only survive one collision) and the fuel gauge is showing empty. What do you do? Why, hijack another car, of course!

Hijacking is accomplished by getting into close proximity with another vehicle and pressing the jump button. This mechanic has two glaring flaws:

There were plenty of occasions where I ended up jumping into an exploding car because I did not have the ability to choose what are I wanted to hijack.

The jump button’s size made it difficult to hijack cars in hairy situations while trying to keep track of my fuel and traffic. There were times when the Jump button seemed to not even respond at all when I actually was able to press it.

The key to success in this game is learning to hijack cars effectively. Unfortunately, this feature just doesn’t fit well in this game. You’re having to avoid traffic, monitor your fuel, time your hijack jumps and on top of that, make sure you hit the tiny jump button.

The game is just too fast paced to allow you to effectively monitor each of these elements. The game would be a lot more fun if all you had to do was drive and not crash. There are the occasional wrench power ups that can restore your car’s health, as well as the occasional gas can that can replenish your car’s fuel. These power ups can be difficult to get to and really offer very little in the way of help. Even after collecting one or the other, I still did not stay in that vehicle for any substantial amount of time rendering them pointless to even try and get to.

In addition to all of the hazards previously mentioned, there are also cops in the game. The cops will risk life and limb to destroy you if they catch you running over a pedestrian or if you crash into them. The game provides you a Nitro button to help you evade the police, but quite honestly, it’s useless.

You basically have no control over your car when you are using nitro and you just cannot expect go faster, have little to no steering and hope to avoid the copious amounts of traffic on the roads. Your car can survive one wreck. Wreck two equals boom. Nitro only hastens boom.

To add insult to injury, not only is the Nitro button (and feature) useless; it’s also two times the size of the jump button!

Both control schemes work well. I am not a big fan of tilt controls but I think they work better in Nitro Dash than the on screen controls.

Nitro Dash offers you a total of 12 characters to unlock. Each character comes with their own unique vehicle. Characters can be unlocked using coins or gears. 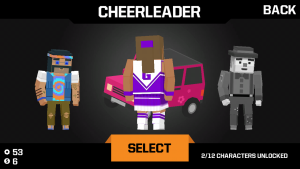 There are two ways to obtain the in-game currency: 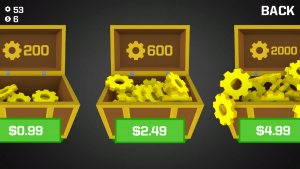 How does Nitro Dash encourage you to spend your hard earned money? Well, you can unlock further characters using gears or coins, but if you want to continue a game without losing your progress, it will cost you 20 gears.

That’s right. It’s either Game Over, lose your progress, or 20 gears. Or you can watch a video…

It won’t take long for you to discover this. When you start your first game, a game tips box will appear on the screen. Typically, a game will pause in the background when tips are being displayed. Not Nitro Dash. The game will just start in the background and your car will begin cruising down the street whether you are ready or not (and you won’t be). Do you read the tips, or do you crash?

You will crash. After your car explodes, you are given the choice: early male pattern baldness, 20 gears or watch an ad. The choice is yours. Choose wisely. In my time with the game, I never chose to spend gears or watch a video. I just started over. Thanks Indy!

Let’s change gears and talk about what Nitro Dash does right.

The sound design in the game is EXCELLENT! The music is fun and fits the game’s theme and pacing quite well. The sound effects are top notch. The pedestrian screams, crash sound effects and explosions all sound great.

What I love most about the game’s sound is the over the top Jimmy Hart announcer that yells “OH NOOOO!” after you explode.

Nitro Dash looks phenomenal! It’s like Grand Theft Auto, Temple Run and Minecraft had a baby. From the cutesy boxy graphics to the impressive particle effects; Nitro Dash is sure to please those looking for top notch graphics in their game. Nitro Dash ran pretty well on both devices I played it on.  There is a High Quality Graphics option, but I’ll discuss that more in a moment.

At default graphics, Nitro Dash ran pretty well on my mid-range ZTE ZMAX 2. There was a little stutter but for the most part, the game ran like a champ.

Oddly, the game only played slightly better, with default graphics, on my NVIDIA Shield K1. This really baffled me, given that the Shield K1 is designed specifically for gaming; which leads me to my next point. 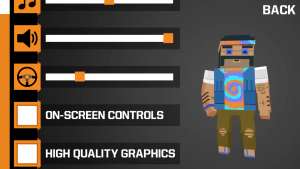 Nitro Dash ran poorly on both of my device’s with High Quality Graphics enabled. It was playable on both devices, but there was a a noticeable difference in performance.

With High Quality Graphics enabled, Nitro Dash ran about as well on the Shield K1 as it did at default graphics on the ZMAX 2.

On the ZMAX 2, High Quality Graphics caused the game to have a noticeable drop in frame rate and very noticeable stutter.

There was only one major bug that I ran across that deserves mention:

I have one final complaint about Nitro Dash. This is more for the benefit of IKCstudio than anyone else.

The game’s description really needs to be rewritten. When I was first assigned this review, I read the game’s description and I was immediately filled with excitement and anticipation. I thought I was going to be playing a portable version of something akin to Retro City Rampage. 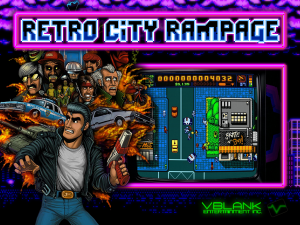 Because what I played was so much different than the description I read, it really left a bad taste in my mouth. This bad taste made it quite difficult for me, in the beginning, to see and appreciate this game’s merits because I was judging them against what this game was said to be versus what it is.

This game has ads. They aren’t all that intrusive but was concerns me about them is their content. When I first started playing this game, I was consistently seeing ads that were encouraging me to click them to scan my device for performance issues, or to click them for a virus scan. Usually, I see these ads as malvertising and avoid them like the plague. The presence of these ads is concerning and needs to be addressed by IKCstudio.

I am playing a game on a mobile device in 2016; not surfing the web in 1996 using Netscape Navigator

Nitro Dash is a diamond in the rough. The game has lots of potential. It’s difficult for me to judge the game harshly because it is blatantly obvious that this game is a labor of love for IKCstudio. I have no doubt that they put a great deal of work into this game. Nitro Dash is challenging and can be lots of fun. Thankfully, the game has just enough charm to allow you to look past its flaws and see the true substance that lies deep beneath the surface.