I went into this review with the best intentions. I really did! Played it for about 20 minutes before wondering, “What’s the object of the game again?” I then realized that this wasn’t any old silly game you play for fun trying to kill time. No, I have walked into the realm of MMORPG (Massively Multiplayer Online Role Playing Game, say the acronym quickly enough and all of a sudden you know Cantonese!). I haven’t played an MMORPG since the days of RuneScape and remembering that I devoted my life to that game, I decided to do the same with this. I kept a journal of each day and what I did for the sake of my review. The following is the first 6 days:

So after a rocky start I can now say I am really far into the game. I’ve been playing for 3 weeks and I still don’t know exactly what I’m doing but one thing is for sure, the wife isn’t going to mess with my stuff again. I’ve got a ridiculously and unnecessarily large base set up around my house with little minions to run it. I couldn’t tell you what the addictive factor is, but it’s definitely present when you get into it.

The game works as an RPG taking place in your very own city. It uses your GPS to place you on your exact position on Google Maps. You have the ability to claim territory with flags and to build an army of “Golems.”Â  If you are going get into the game, my first suggestion would be to get friendly with your neighbors, otherwise your territory won’t be “yours” for much longer! There is real-time multiplayer which allows you to trade, buy and sell, make alliances, make enemies, and even declare war. While I was disappointed by the absence of quests the game allows you to explore dungeons and to find certain items that will unlock new skills.

Being an online mutliplayer gameÂ  I couldn’t help but laugh at the confidence boost everyone gains from online chat. “Hey there beautiful, ASL?” maybe I shouldn’t have named my character Candy77. Another favourite was, “%@!$ ya, take that *****.”I think it’s good to be passionate about things… just not about stabbing me with a virtual sword. I also met some really nice people as well, “I can get you 100 gold, you just need to private message me your username and password and I’ll put it in your inventory.” Unfortunately, it was at this point I lost reception in the subway tunnel and could not take him up on his generous offer.

By my last comment you may have already assumed, the game only works with a good network connection, and GPS/Wireless Network Location. Not a huge drawback, but when it is no longer a game but rather an addiction, you’ll want your fix. Trust me. I feel like I’ve really immersed myself into the culture of the so-called “parallel world,” and if I’ve offended anyone or turned anyone off the game you must have misunderstood me. I play the game 24 – 7! I have even woke up in the middle of the night to get a drink and found myself on my phone for a good half an hour mining for iron, killing creatures, and fortifying my kingdom. The wife still isn’t impressed by my new habit but I think PerBlue has really done an excellent job on taking advantage of the Android platform and creating something worth while. 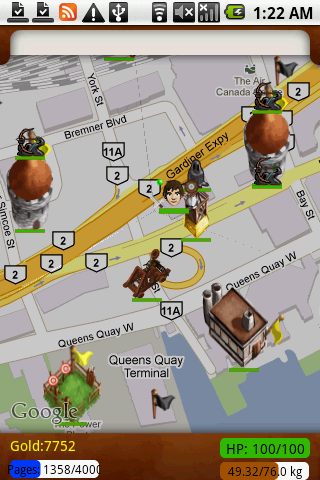 Feel free to hit me up on Parallel Kingdom. (Username: Mattman911)