Your Android (be it a smartphone & tablet) is an amazing device, capable of incredibly complex gaming controls, graphics, sound, and strategy options. The combination of these options provides a wealth of gaming choices. Amongst this spectrum of lifelike gaming choices is a much more simple matter of digital goal-reaching, one that includes all the brainpower of repeatedly tapping the screen. 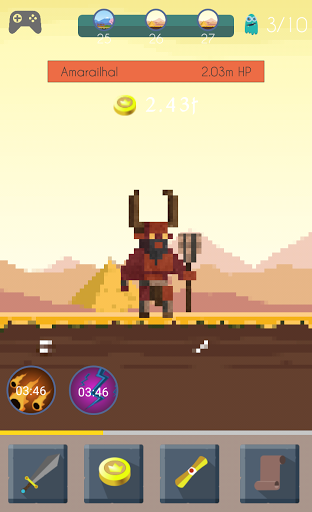 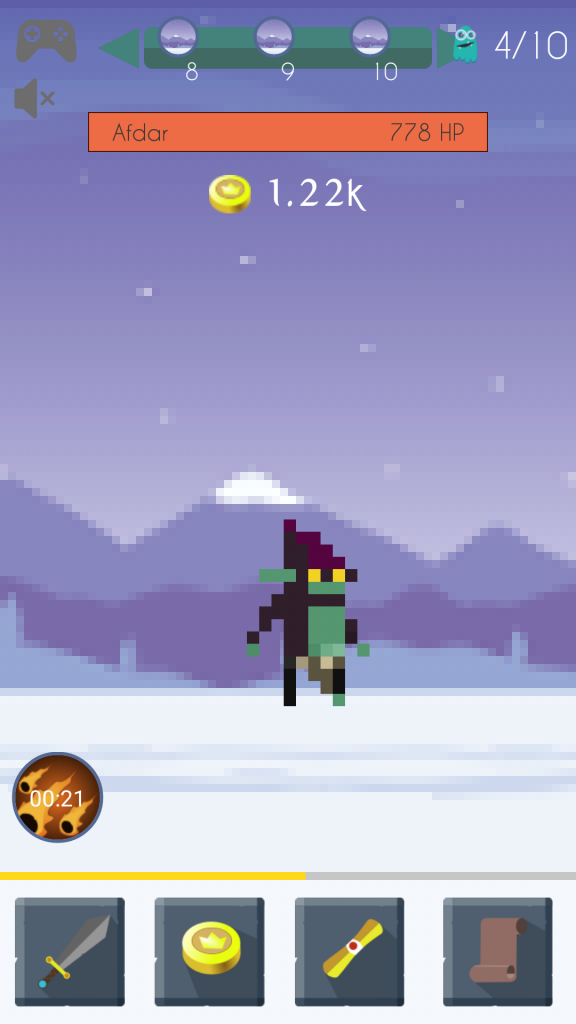 The idea behind such a simple game is just that: instead of dealing with the complexities of a traditional RPG (Role Playing Game), like managing multiple quests, numerous relationships, and sometimes intricate control schemes, the idea here is to satisfy your inner-fantasy-hero with just a tap of the screen. You start with easy enemies to slay, using basic weapons.  Each enemy has a certain number of “hit points” you need to reach in order to conquer it. Each weapon has varying amount of Hit Points (HP) available with each strike (screen tap). As you kill enemies by repeatedly tapping on your screen, you gain money. This money can be used for several things: 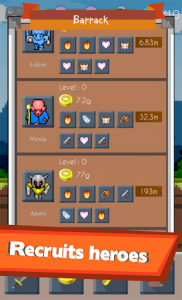 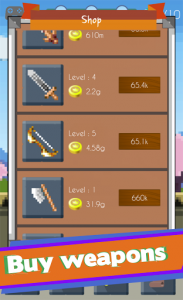 You also gain experience points (xp) with each enemy killed. These xp allow you to unlock your own special skills to become more efficient at slaying your enemies.
This game goes on forever… at least I think it could. There are (seemingly unlimited) levels.  Each level has 10 enemies to kill, in increasing difficulty; difficulty being defined by how my Hit Points it takes to kill them.  The 10th enemy is always a boss, with a much higher Hit Point total that the previous 9.

Usually by this enemy, you should have acquired enough coins to upgrade your weaponry to kill that boss. Once you kill that level’s boss, it’s on to the next level where you start attacking (tapping the screen) the next 10 enemies standing in your way. The visuals of the enemies is a looping set of about eight different creatures, and they take turns swapping places in the line of 1 to 10 (or boss).

I’m to understand there’s a storyline driving this game, but I neither was presented it in its entirety nor did I have the patience to seek it out.

The graphics are the colorful 8-bit affair; actually pretty well-done for those of us old enough to remember the arcade D&D games.  Sound & music is also a plus, with good fantasy-hero orchestrals that fit will with the quest at hand. 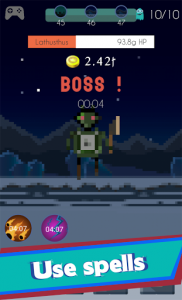 Ok, I’m going to give myself some credit here. I had personally not heard of these 1-tap RPG games before downloading Pixel RPG Clicker. And within five minutes of starting gameplay, I was pretty lost. I didn’t understand that all there was to playing this game was tapping the screen as fast as I could (not counting going to the inventory to spend my money from time-to-time). I got frustrated at first and set it aside for a few days, not wanting to continue.

But a trip to Chicago (and a long train ride) ensued, and I gave it some time. I have to admit I got into getting to and killing the next boss in line a little bit, but after a while it petered out. I got to level 27 before writing this review, and that’s as far as I’ll get, forever. Maybe I’m old. Maybe I’m more of a traditional RPG gamer at heart. Or maybe I just don’t get it. But I think my wife summed up these types of games when she watched me play it for a few minutes while on our train ride when she said, “That’s it?”.