Pocket Zombie is a delighful and unique take on the virtual pet, er, in this case, zombie. Pocket Zombie places you in control of the care taking of a Pete Lorre’esque zombie. Care for this zombie occurs through a series of tasks including: play, feeding, bathing and sleep. As you continue to take care of your zombie, you will level up and gain access to items for your zombie, including: skins, environmental decorations, new types of food and potions. All of these items can be purchased using the games gold coin currency which you earn through performing each task involved with taking care of your zombie.

I think one word sums up Pocket Zombie, very well: charm. Having grown up in the 90’s during the Tamagotchi and Digimon craze, it’s very refreshing to see a modern day take on the virtual pet for a new generation of kids. I say “kids” because this game is the perfect distraction for your kid(s) while sitting in a waiting room or during a long road trip. There’s plenty here to keep your child busy.

As a virtual pet game you are tasked with taking care of a zombie. Luckily for you, care of the un-dead is pretty simple and straightforward. Four tasks are required to take care of your zombie:

One of the things I love most about this game is how unique of an approach it takes toward one specific task: play with your zombie. Playing with your zombie is accomplished through the play of 4 minigames: 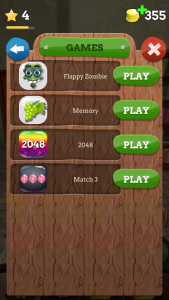 As you play these mini games (any that you wish to play), you will continually raise your zombie’s happiness level as well as contribute to leveling up and earning coins to buy items for your zombie. Each of these games is fully fleshed out and each plays very well, lending to a full experience with all of them.

A lot of times, the mini games contained in virtual pet titles are lazy and unoriginal. I have to applaud the Arongame in his creativity and implementation of this feature in the game. I must mention that 2048 feels a bit too advanced to be featured in a game geared towards children and should probably be removed from the game altogether.

Feeding allows you to feed your zombie a variety of different foods, both healthy and unhealthy. I love this feature because it allows you the option to make your zombie fat. My zombie has lived entirely on a diet of french fries. As you level up, more foods will become available for purchase using the in-game coin currency.

Bathing is pretty straight forward. You touch a bar of soap and move it over the zombie in order to lather him up. After you’ve lathered the zombie up, you click a bucket located to the 1 o’clock position of the zombie, which releases a small torrent of water to rinse him off. It could just be me, but the zombie seems to look a bit smug during his bath time… 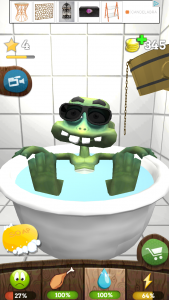 If you go too long without bathing your zombie, flies will begin to buzz around him, which he does not like or appreciate. This raises the question: is it really possible to clean a zombie?  He’s a rotting corpse…

Sleeping is my biggest problem with this game. When you put your zombie to sleep, a timer begins. This timer can start as high as 1 hour, 59 minutes! I see this as a bit of a pay wall because there is a potion you can buy for 50 coins which will automatically replenish your zombie’s energy level and eliminate the need for you to wait for him to sleep.

Now here comes my “conspiracy theory”: My thought is that this sleep timer is a way to manipulate you into buying a coin bundle, via in app purchase, to have on stand by for those times that you don’t feel like waiting the upwards of 2 hours for your zombie to sleep. With all of the content available to unlock in this game, it is certainly very reasonable to assume that you could run out of coins and be forced to buy more, using real money, in order to continue playing the game uninterrupted.

Parents, be warned: this game does have in-app purchases. In order to avoid unwanted charges to your bank account, be sure to block in-app purchases on the device your child is playing Pocket Zombie on. One bright light in the midst of this darkness is the ability for your child to continue to play the available mini games despite how tired the zombie may be. Trust me; the zombie will get over it.

Now that we’ve covered the gameplay basics, let talk about the “Shop”. The “Shop” is accessible via the green button with a shopping cart on it that is seen in each area of the zombie’s habitat. The Shop has four categories: 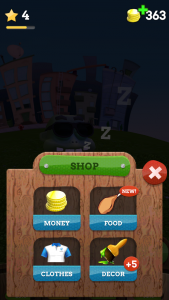 As you progress through the game and level up, more and more items will become available for purchase in the “Shop” using the game’s coin currency.

I think the graphics in this game are one of its weak points (in reference to the main game’s graphics. I will review the mini game graphics separately). I particularly dislike the way the zombie looks. As mentioned above, it looks like Pete Lorre from Looney Tunes, which dredges up terrifying childhood memories.

The textures in the game are bland and lack a great amount of detail. I must admit that before playing this game, I was expecting something less ‘cutesy’ and more like “Zombie Weatherman” aesthetically. Anyone remember that old app (game?)? Nonetheless, the graphics get the job done. I won’t ding the game too much for them.

Graphically, the mini games look excellent! I have no complaints about any of them, either from a visual standpoint or a playability standpoint. I especially applaud the developer for Flappy Zombie. Arongame really captured the ‘pixelesque’ retro feel of it’s inspiration, Flappy Bird. Out of everything in this game, Flappy Zombie is my favorite feature. Flappy Zombie is so good that it could be a standalone title. Kudos, Arongame, for designing something so delightful!

The game’s sound design is a bit sparse. The only music heard in-game is in the mini games. Unfortunately, this music is the same no matter which mini game you play. There are some basic sound effects throughout the main game: crickets in the sleep area (and even a rooster and a wolf at appropriate times), a water splash sound when rinsing the soap off of your zombie in the bathing area; it’s all basic stuff here. The zombie’s voice definitely fits its look. It sounds sort of like a squeaky voiced muppet.

While Pocket Zombie is not perfect, I definitely have no reservations in recommending it to any parent looking for a new game for their child to play. Heck, even as an adult you may have some fun with it. Give 2048 a try. It’ll give your brain a workout.

I do think the game could use a little more in-depth of a tutorial. For example: at the end of my time with this game, my zombie was shivering and had a temperature gauge to his left that started out at a reading of 5 percent. I had no idea what to do about this.

I would also recommend that 2048 be completely removed from the game. I think that 2048 is just too advanced for what I perceive this game’s target audience to be.

Pocket Zombie is a wonderful game. It’s solid and it’s fun to play. It has a near infinite replay value and if you avoid the wretched in app purchases, the game is completely free! Despite my complaints about the game’s graphics and sound; the mini games, their quality, and the overall charm of this game warrant a score of 3/5 from me. Definitely give Pocket Zombie a try. I feel confident that you won’t be disappointed.