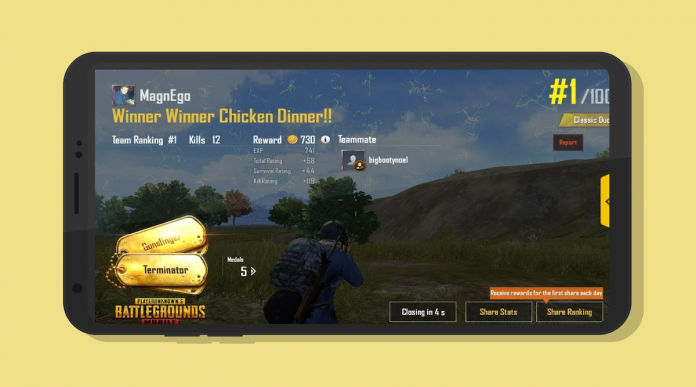 The roar of the propeller engines in your ears is deafening. You sit with 99 other people, each of you as scared as the next. Maybe you know some of them – maybe you’re even friends. Maybe you can rely on them – maybe not. The massive cargo door of the C-130 opens, and the wind billows hair and clothes alike. One by one, the other people in the jet leap into the abyss, descending on the small island below.

Then it’s your turn. 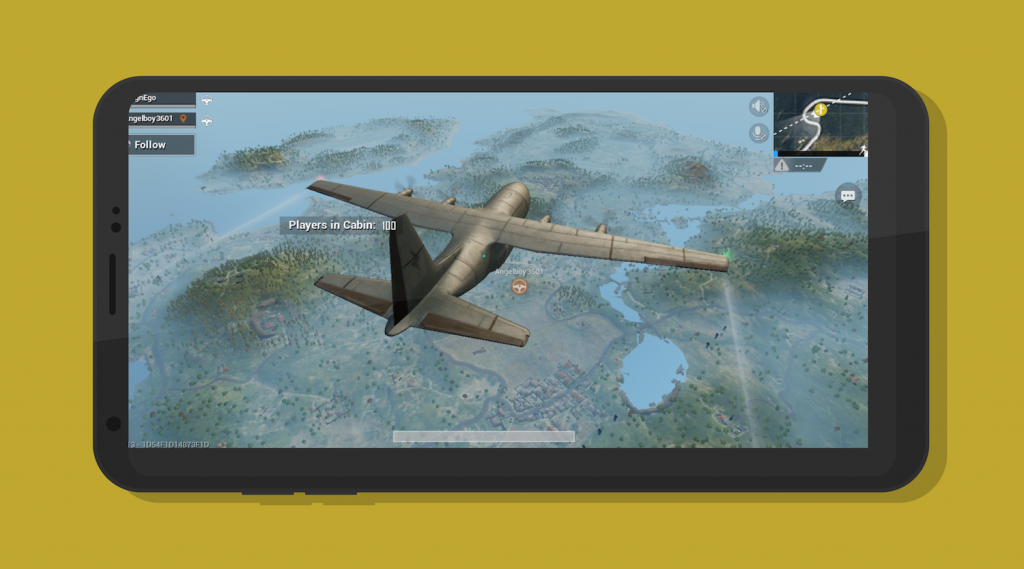 The parachute on your back is heavy, and you see the dots of the dozens of other contestants in free-fall. There are plenty of places to see on this deathtrap landmass – cities, towns, ports, a school, a hospital, even a military base – but you know that those places are likely to heavily populated, and therefore dangerous. You gaze out over the island and pick your spot, a small ranch with a couple of outbuildings that looks promising. Diving, you pull your ripcord to pop your parachute. You drift down to the ground, landing roughly. Turning your gaze to the sky you look for other chutes nearby, but you don’t see any.

You sprint into the closest house, shouldering it open and peering into the dim light. The main room is empty, cleared of all furniture and person effects of whoever once lived here. You push into the kitchen, and the glint of metal on the ground catches your eye. It’s a pistol, lying on the cold, dingy linoleum. Beside it are two boxes of ammunition; almost as if they were placed there for you to find (which, of course, they were). 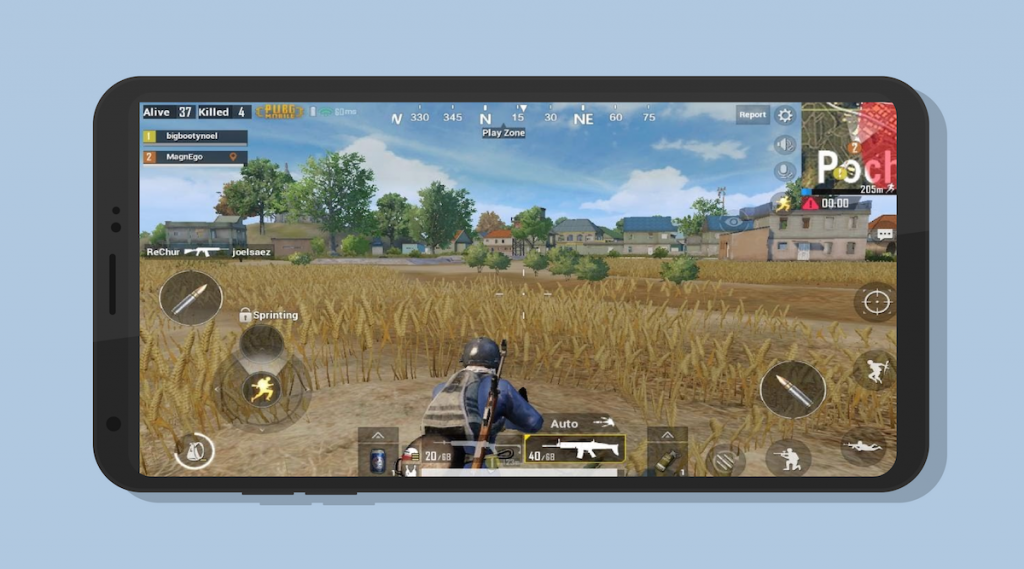 A series of shots from an automatic weapon shatter the relative silence of the island. A scream of pain follows – then silence. The contest has officially begun. You hesitantly load the weapon, no longer helpless but still very much vulnerable. The bathroom holds another box of ammunition – this one a box of rifle rounds – and a small bottle of painkillers. You know you’ll need them before the day is done. The bedroom – the mattress soiled and bedframe smashed – is useless. Totally empty.

You slowly climb the stairs, the reports of automatic weapons sounding from all directions. You know no one else is here – you would have seen them – but you move cautiously nonetheless. Laying at the top of the stairs is a tactical vest, complete with ballistic plates. You put it on hastily and load it up with the spare magazines you found. By the time you finish exploring the house, you’ve amassed a small arsenal; an assault rifle, a shotgun, even a grenade! – and a backpack to carry all the spare ammunition.

It’s been a while since you heard any gunshots, but you know there are many more to come. You steel your nerves and begin the long walk down the road. 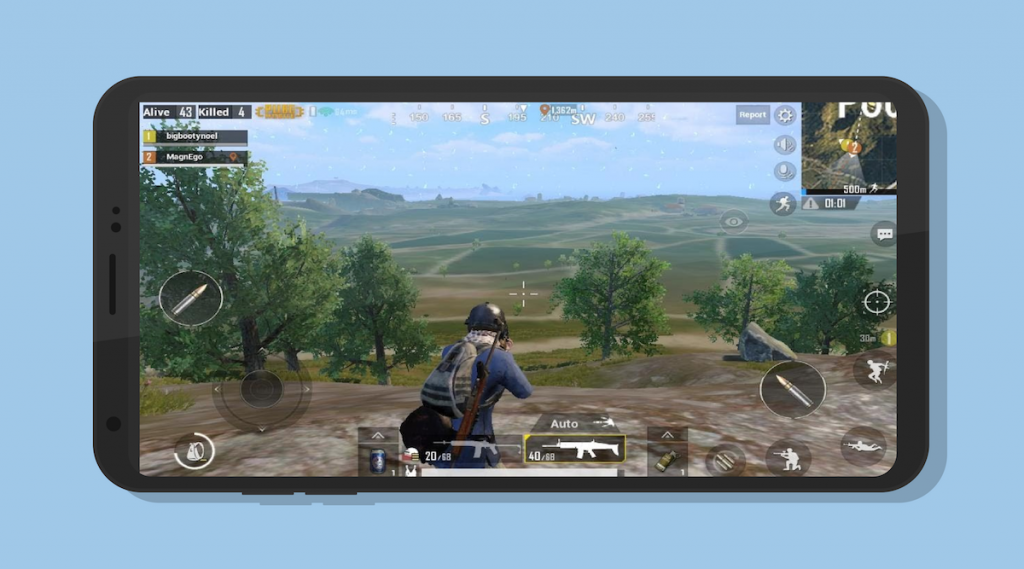 The Premise of PUBG

The above is about how a game of PlayerUnknown’s BattleGrounds goes. Admittedly, there’s quite a bit more gunfire, wanton death, and explosions in a typical game, but the vast majority of your time will be spent looting houses and gearing up for a showdown as an ever contracting blue barrier herds you toward a random location.

With almost 30 weapons across eight categories, PUBG offers a variety of gunplay options in addition to grenades, armor, medical supplies and vehicles. The game makes you parachute into each match from a plane, onto an 8km x 8km island that features a wide variety of locations. As such, no two games play out exactly alike; with 99 other players in the game, each one picking where to land independently of the others, you have to improvise constantly. Do you land with a group of other players, hoping to survive the initial onslaught and come out well-geared, or do you land in isolation, hoping to gear up before you have to fight someone? 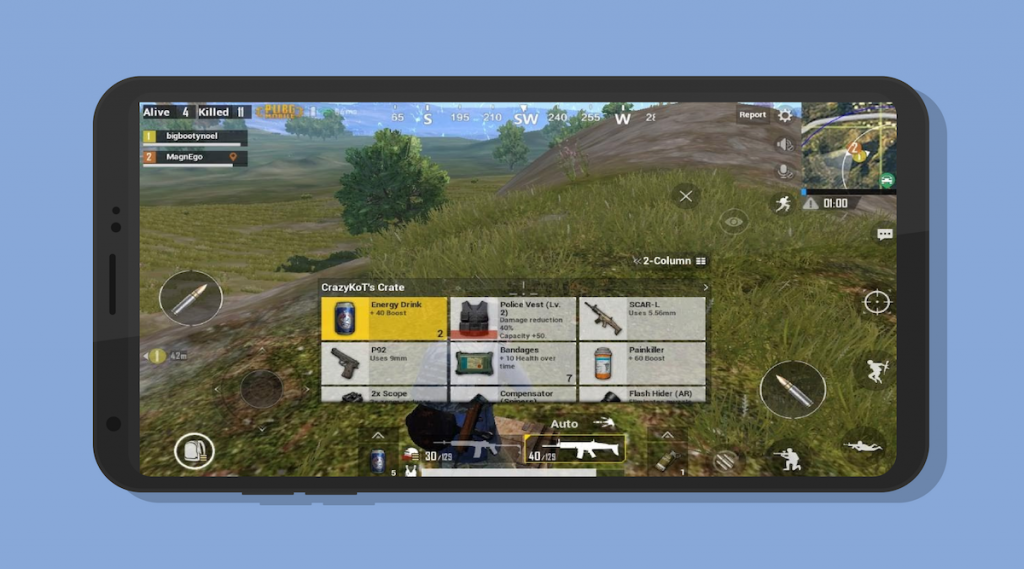 Regardless of your approach, you’ll eventually end up fighting for that coveted Chicken Dinner (that is, being the last man standing). It’s intense. Gunfights are quick and brutal, and while collecting gears offers a respite from that intensity, it’s still plagued with suspense that creates an atmosphere unlike anything else out there (yes, even Fortnite).

The Difference Between Mobile, Console, and PC

Unlike Fortnite, which is unified across all platforms – no matter which you play on, it’s the same experience – PUBG varies greatly from one to the next. PC is the front-runner, where all the latest and greatest features come first. XBox has more or less the same experience, though with features that come later. It uses the same assets, the same map, and is generally just a lite version of the game. 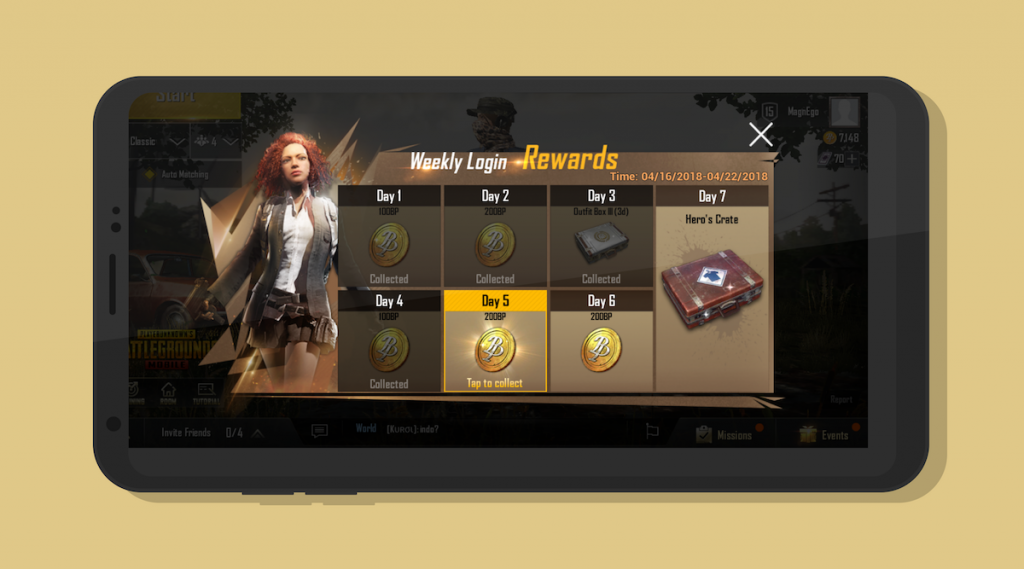 The mobile version, however, takes a completely different tack, thanks to Tencent. In the PC and XBox versions, there’s zero persistent progression. No leveling system, no rankings (save for stats leaderboards), no quests, no economy beyond the limited Battle Points one earns for participating in matches. In PUBG Mobile, you get a little of all of these things. 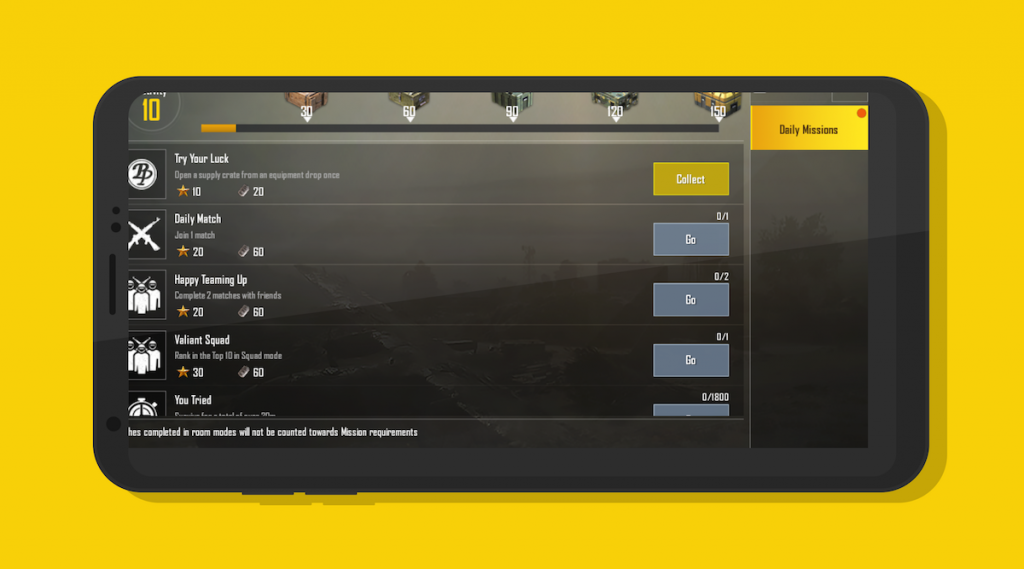 Daily Missions provide goals to work toward, and reward you with Experience Points (to increase your overall level) and Activity Points (which give increasingly better rewards the more you earn them on any given day). Events are timed activities that often give you unique gear for performing a specific task – like missions, but limited time offerings. As you earn Experience Points, you’ll level up and earn additional rewards. Like many mobile games these days, you get rewards for logging in daily. This is usually in the form of XP or a crate to get new gear. Finally, as you play through matches you’ll be placed into higher Divisions, which feature more skilled players and fewer bots.

Yes, that’s right – another difference of the Mobile version is that it features bots to hold your hand through the opening Divisions. And I wish that was communicated in the first few games, so we know we’re being coddled rather than thrown to the wolves. I felt like an utter badass the first few games I played (I’m decent, not great, when I play on XBox), but once human players started getting thrown into the mix – especially those try-hards playing with a mouse and keyboard – that sense of Deification goes away real quick. Bots really give a sense of immortality in the early going – they are so dumb.

PUBG is not a traditionally gorgeous game. It’s got choppy textures, occasionally janky animations, and – especially on XBox – framerate issues. And yet, it’s got this kind of grimy beauty that reeks of a post-apocalyptic wasteland. Buildings are little more than abandoned shacks, and the burning husks of vehicles dot the landscape.

And while the Mobile version of PUBG doesn’t have quite the graphical fidelity of its console or PC counterparts, it still captures that magic. In a sad commentary on the state of PUBG on XBox, PUBG runs better on my LG V30 than on the XBox One X. It’s obviously noticeably lower resolution and lower fidelity but the frame-rate, stability and even loot density is all much better on Mobile.

Sound-wise, the game is as crisp as ever. One of the great things about PUBG is the ability to identify the type of guns being fired and the direction and distance they’re being fired from, just based on how they sound. Whether it’s the whump, whump of an SKS fired at range or a TAT-TAT-TAT of an M16 on burst-fire right in your face, the depth of sound and lack of music makes for a unique audio atmosphere.

Voice chat is also baked into the game, which is an invaluable feature when playing the team-oriented game modes of PUBG. And it’s surprisingly good quality! Game chat rarely plays through the mic, and the latency, even on mobile data, is totally manageable. 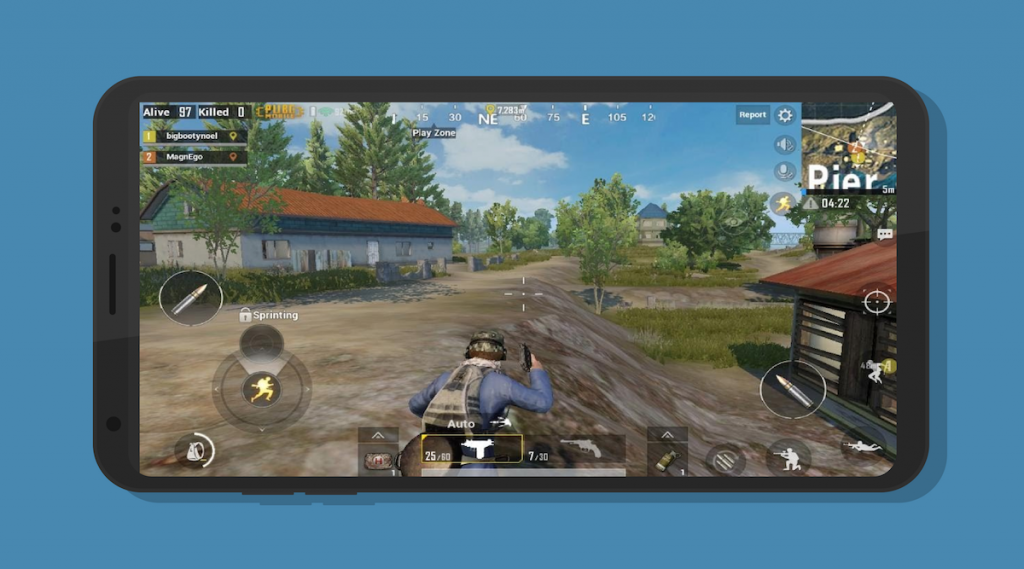 As you’d expect with a complex shooter on mobile, the controls are a little janky. There are a ton of mechanics on the screen all at once, and it gets a little crowded. Tencent optimized the controls as much as possible – picking up ammo and attachments for the weapons you carry, automatically for instance – but there’s still a lot going on visually.

The cramped controls and the close proximity of the Fire button to the Aim panel means I’ll occasionally fire when I really just wanted to look around. You can see how that would be problematic in a game 99 other people are trying to kill you. 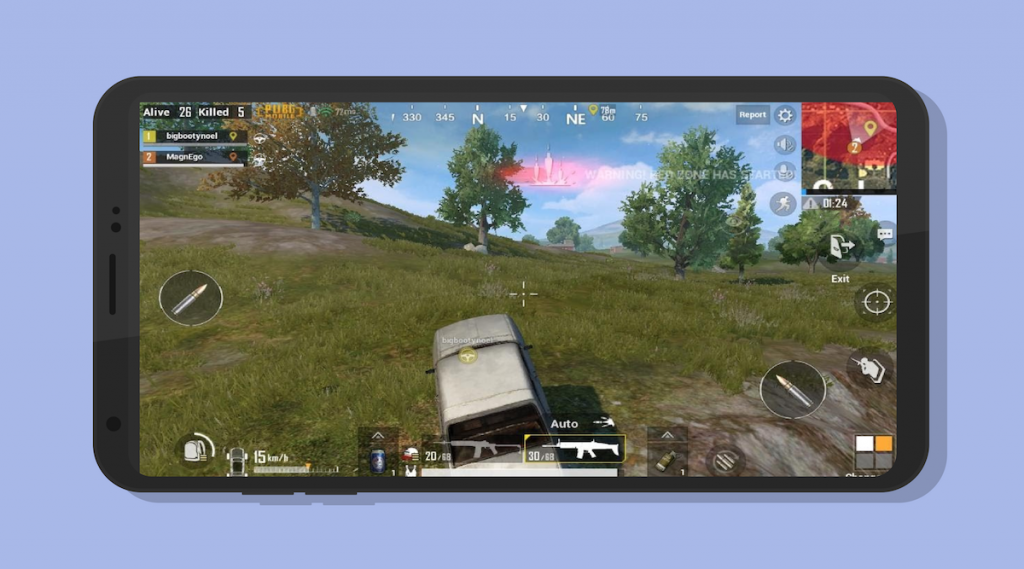 Speaking of shooting, the aim-assist in PUBG Mobile is a little out of control. You can blow people away just by glancing at them at times. Even Aiming Down Sights (ADS) at a distance is optional. If you fire enough times, you’ll take someone out while they take their time aiming.

At the moment, the game is completely free, with no ads and no meaningful in-app purchases. I’d expect that to change over time, but for now, enjoy the freeness.

UPDATE: With this last update, Tencent added In-App Purchases – all purely cosmetic – to the game. It’s a shrewd move by the Chinese software giant, to launch a game tit knew would be successful without IAPs, and add them in later.