Weather apps are a dime a dozen. Today we’re going to take a look at Raindar, who does it a little bit different. Raindar focuses on one thing, and does it incredibly well. If you haven’t figured it out yet by name alone, Raindar is a simple radar app that gives me relevant information quickly and with just enough options to make it powerful.

Raindar is one of my favorite apps because it checks a lot of boxes for me. First off, it’s incredibly easy to use. In fact, it’s easy to use “right out of the box”. When you first open Raindar, it detects your location, centers map directly over you with about a 250 mile radius and shows you what’s on the radar in the area. Super simple. 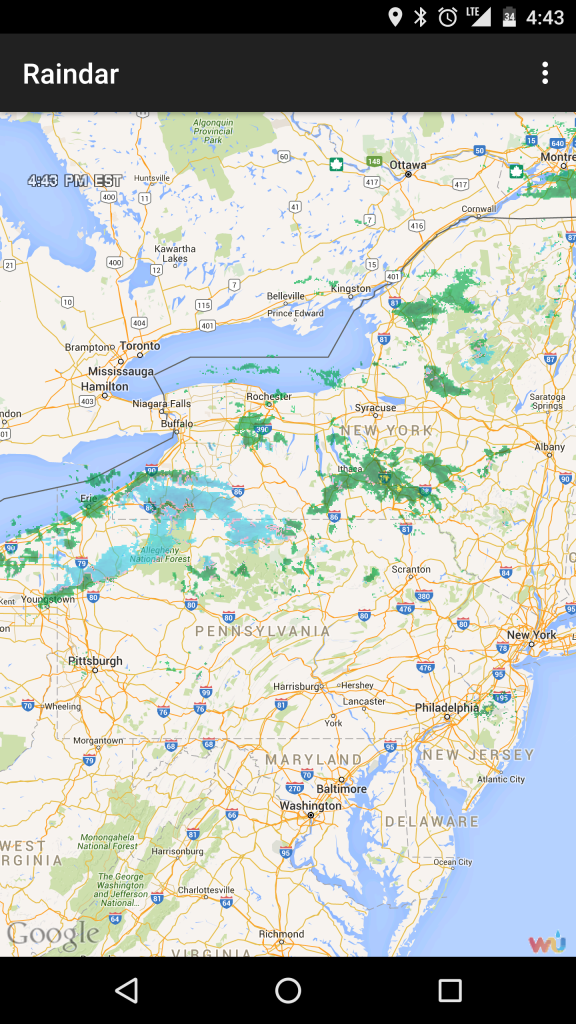 Raindar is also very fast. It loads almost instantly, and displays the information in a straightforward way. You can be in and out of the app in seconds with the information you need. If you’ve ever used Google Maps, then you’ll instantly recognize the maps and the weather systems will be easy to find. Weather Underground supplies the weather data.

Not only is it fast to get the information for your area, but if you’re looking to see what the weather is like at your destination, you can quickly search, have a list of cities that match your search and be taken to that location fast.

While you’re in the app, it detects your location and refreshes the doppler radar every 30 seconds. This is a fantastic feature, especially if you’re sitting watching a storm system roll toward you.

If you’re ever in a severe situation, you’re going to want relevant information quickly. Raindar will display weather tracks in these situations with icons for Thunderstorms (yellow circle), Hail (yellow square), a rotating Thunderstorm (yellow diamond) or a Tornado (magenta triangle). Clicking on any of these icons will show you more detailed information in an effort to keep you safe.

While Raindar is pretty simple out of the box, there are a few options for you to tune the app to your liking. First off, you can turn the storm tracks on and off if you like. Also, you can toggle the display from either just a regular map or you can switch over to a satellite image. I prefer the map because it’s a little cleaner and the information is a little more clearly displayed.

You also have the ability to turn up the reflectivity within the app. You may be wondering what exactly that means. Have you ever been watching your local weather man and his radar shows it’s raining where you are, but it’s maybe just a bit foggy? Those are called false reads, and they show up because the reflectivity is turned up too high. Doppler Radar, or in this case “Pulse-Doppler” works by picking up reflections off water in the atmosphere, and depending on your reflectivity setting, your radar will be a little more sensitive at the cost of some false reads.

Raindar certainly isn’t perfect. It hasn’t been an updated in a few years, and even though its core functionality is entirely intact, it could use a facelift. But, for what it does, it’s brilliant. Simple and fast are generally two of the most important factors in a weather app and Raindar kills it on both. This isn’t going to be your seven day forecast app, but it isn’t trying to be.

I generally don’t write about many apps because I don’t use many. I’m the type of person that generally doesn’t want to install an app on my phone if I can get a task done in the mobile web browser, but Raindar is one of the first apps I install every time I switch to a new phone.