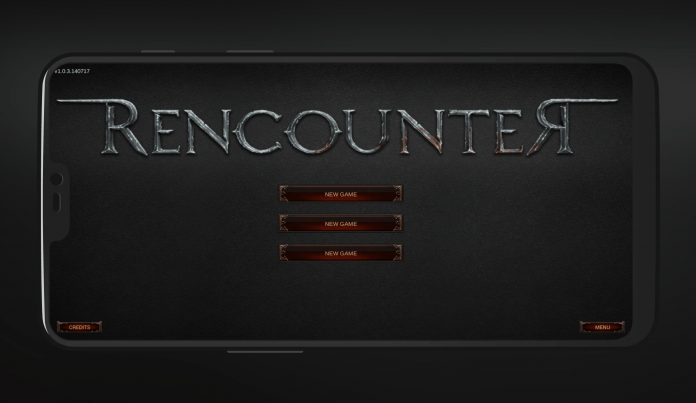 As the gaming industry moved from consoles to mobile devices and phones, one category that seems to be constantly left behind is RPGs. While console developers still keep pumping out quality RPGs, there are very few popular games in the Play Store that fall under this category.

Rencounter: Ancient aims to fill that gap with a solid, turn-based RPG with everything you expect from a game under this genre. 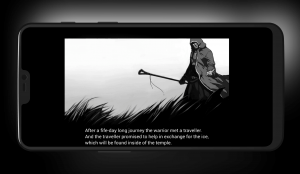 Rencounter is a turn-based RPG set in a mysterious dungeon. You control a warrior and your job is to dwell on it in search of a hidden treasure.

The dungeon is separated in rooms, each one housing several other fighters. When defeating them, you earn ice (that is not a typo), letting you upgrade your warrior and buy new weapons.

Perhaps one of the first weaknesses you discover in this game is that the tutorial is rather small and non-descriptive. With enough time, you get the hang of things, but there is a lot of stuff left unexplained at first.

The game does tell you how the turn-based mechanic works. There are hexagons on the floor and in order to move to one, you need to tap on it and then press the corresponding button. You can also use a “Protect” command, which makes your character harder to hit and replenishes its energy quicker. 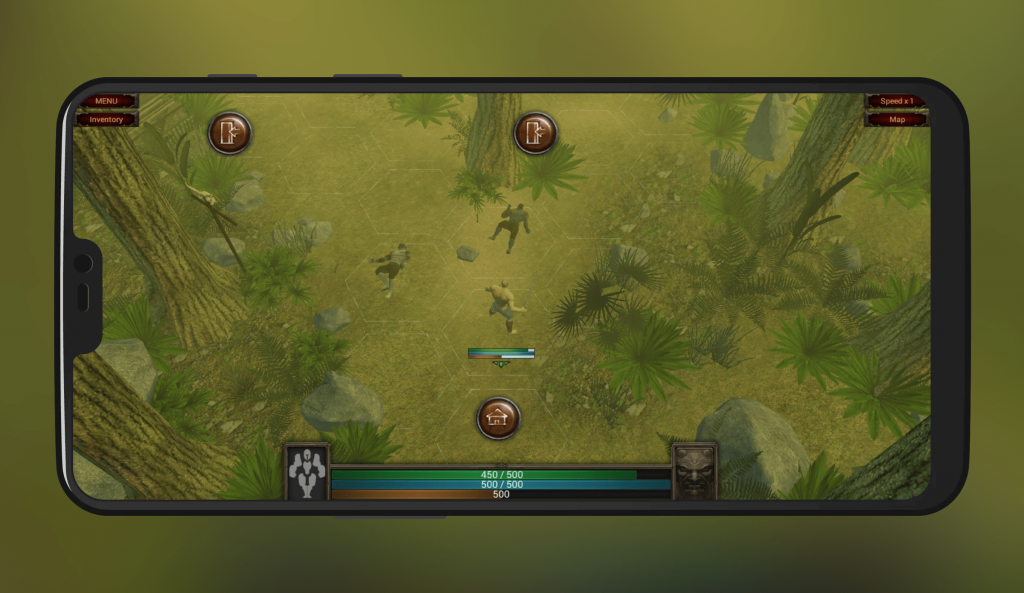 When an enemy is next to you, the attack command becomes available by tapping on top of the sprite.

There is a strong attack, which yields a lot of damage, but there is also a aiming attack. I never figured out its side effect: I just figured out that it is an attack that does less damage, and apparently you can attack a specific body part. It probably makes your attacks more accurate, but I never found confirmation anywhere.

In Rencounter, your character has three different bars you need to control: time, endurance points (EP), and health points (HP). Time controls how many actions you can do in a turn.

In cases where you have lots of time and your action does not fully deplete this bar, you can do two actions in the same turn, which can be a life saver in some situations.

In order to attack, you need EP. The amount is determined by the weapon you hold. As you can expect, stronger weapons need a higher amount of EP.

When you get hit by an opponent, you lose HP. Curiously, you also lose EP, which can completely screw your run when you are surrounded by a lot of enemies.

If your HP reaches 0, it’s not game over, but rather returning to a hub in which you can buy upgrades and weapons. 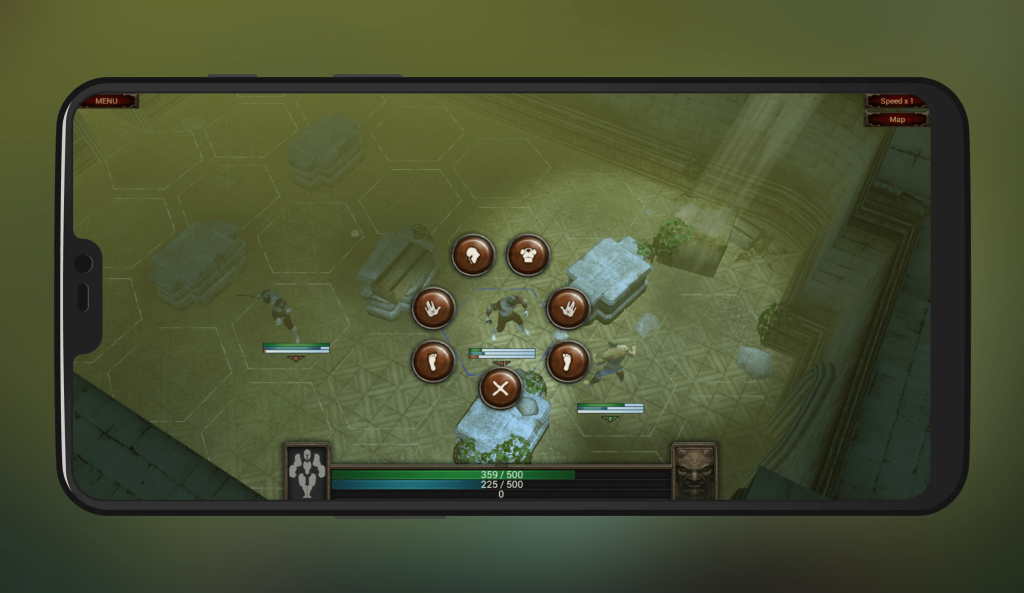 As expected with a turn-based game, there are two phases: attacking and defending. When attacking, you select an opponent and the type of attack, and the game calculates the damage based on your character’s strength and your opponent’s defense.

In some situations, the opponent can parry or evade an attack, which wastes your EP and your turn. If your attack connects and the opponent dies, you receive ice and, sometimes, a weapon.

Once you go to the defending phase, there is absolutely nothing you can do to prevent damage, evade, or parry. On your turn, you can get into a protective stance, which will make it more likely for your character to evade incoming attacks. Other than that, your character is on its own. 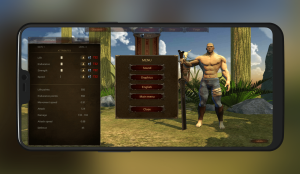 Early in the game, you will get access to a hub, which the game actually identifies with a home button, but I will refer to as “The Hub.” In case you die, you’ll be thrown back to this hub (but you’ll keep whatever loot you gathered on your run).

There’s no real-time action here, so the only way you interact with the game is through buttons. Unfortunately, those buttons are sometimes frustrating to use.

For starters, some buttons are just impossible to tap. They are way too small for the screen. I am using a OnePlus 6 to review, and a 6.3-inch screen should be big enough. Sadly, it seems like it isn’t. I can’t even imagine how bad playing this on a 5-inch phone would be.

On the battlefield, you execute all of your commands by first clicking on a tile, and then clicking on any of the buttons that show up. At least, these are easier to tap. However, if I click on a tile and I want to then select another opponent, I have to first close the current group of buttons, and then click on another enemy to activate the options for it. Tapping on another opponent should be enough, but it isn’t.

Also, I had a really hard time controlling the camera. It is done by rotating the screen with two fingers, but it was very erratic and yielded inconsistent results. Fortunately, since it is a turn-based game, camera movement is not critical, but it was frustrating nonetheless. 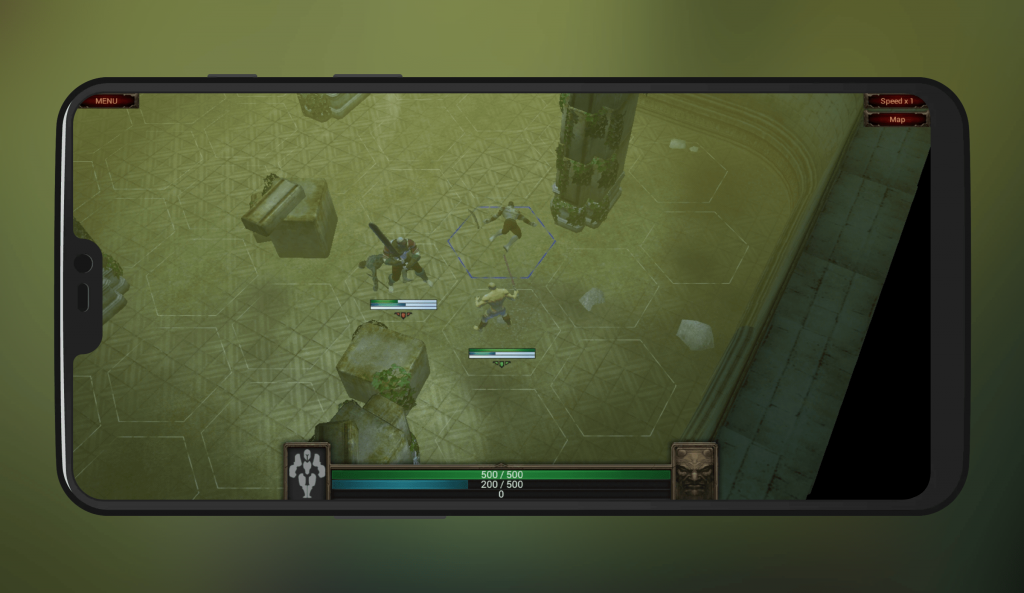 Audiovisuals in Rencounter are of mixed quality. While the main character is nicely depicted in the Hub, and the dungeons are of acceptable quality, the game looks like it has a gray-greenish overlay on top. I suppose this is done to provide some atmosphere for the game, but it feels a bit overused.

Other than that, the game does not suffer from performance issues. The artwork mostly follows the same style, resulting in a cohesive experience. I noticed some small grammatical mistakes here and there, though.

Regarding sound, I have mixed feelings. They aren’t bad, but they aren’t spectacular either. The sound that indicates the start of your turn is particularly unlikable. The music, however, adds a bit to the overall dark, mysterious atmosphere.

Rencounter is a turn-based RPG that gets a lot right. The upgrade system has depth and the mechanics feel at home, even though they could benefit from a more extensive tutorial.

The game never pushes you towards micro-transactions, and some audiovisual parts are decent, both of which we we liked.

On the other hand, small buttons, controls that could be more helpful, and a weird tendency of painting everything in greenish hues make this game less enjoyable than it should be. If you want to ignore these issues, Rencounter is a solid RPG in a store lacking of games that don’t aim to extort every cent out of you.

Download and install Rencounter: Ancient from the Google Play Store.

Shadow Quest: a step above other mobile RPG’s [Review]