When Facebook debuted its chat head system with Facebook messenger in 2013 it was an instant hit. So much so, that when they axed SMS and MMS messaging from the app, it caused quite the uproar. The Paranoid Android ROM makers would soon pick up the mantle and integrate chat head style notifications into their custom baked ROM.

Rovers Floating Launcher is the latest app to feature a floating “chat” head. Except it’s not a chat head, but a floating launcher of sorts. The call them rovers. In this  review, we’ll examine what makes this launcher unique.

The nice thing about this launcher is that you don’t have to get rid of your favorite launcher to use this. Rovers Floating Launcher works on top of your existing launcher and applications. It is also highly customizable.

The app is free on Google Play, but there are 3 in-app purchases that will unlock certain features of the app.  First, you are limited to 10 Rovers. By purchasing this upgrade, you’ll be free to add as many rovers to the launcher as you please. Second is more colors. This will allow you to change the color of the individual Rovers. Third is more settings.  This will allow you to customize the trigger’s color, alpha, offset, and size. Each upgrade is $0.99 or you can opt for the complete package for $2.49, save $0.50 in the process and get any other paid upgrades that will be released in the future.

When the app first launches, you are greeted with a 5-page tutorial. You’ll find that the tutorial is fairly easy to comprehend. All the basics are there. One only needs to configure the app.

Configuring the launcher is fairly easy to do. There is a plus icon that allows you to add another item that you wish to launch. You can select from apps, shortcuts, actions, and folders.

The folder option is very handy as it allows you to group certain apps, shortcuts, and actions together. Once you select a new folder, you can customize the icon and color scheme of the folder. This is handy as there are no text elements to the launcher and the customizable icons will help you recognize which folders contain which items. One feature that I would like to see is the ability to move already existing Rovers in and out of the folders simply by dragging them. The only way to accomplish this is to remove the Rover from its current location, navigate to the folder, and select the + icon and re-add the Rover. This is a little complicated for my taste.

The apps option is fairly obvious. It allows you to add an app to the launcher.

The shortcut option gives you the ability to direct dial or direct message a contact. You can also connect to bookmarked web pages, Gmail labels, Playlists, and any other shortcuts supported by individual apps.

The action option allows you to open an app drawer, turn on your flashlight, go home, go to your last used app, open your recent apps, open Google search, view battery level, voice search, go to settings, and direct-dial your contacts. You can also clear your ram. I found this feature to be especially helpful as my Asus Padfone X, when docked and undocked, clears out the running apps from your task switcher, but it doesn’t clear it out the ram. So with Rovers I can clear out all available ram with just one click. 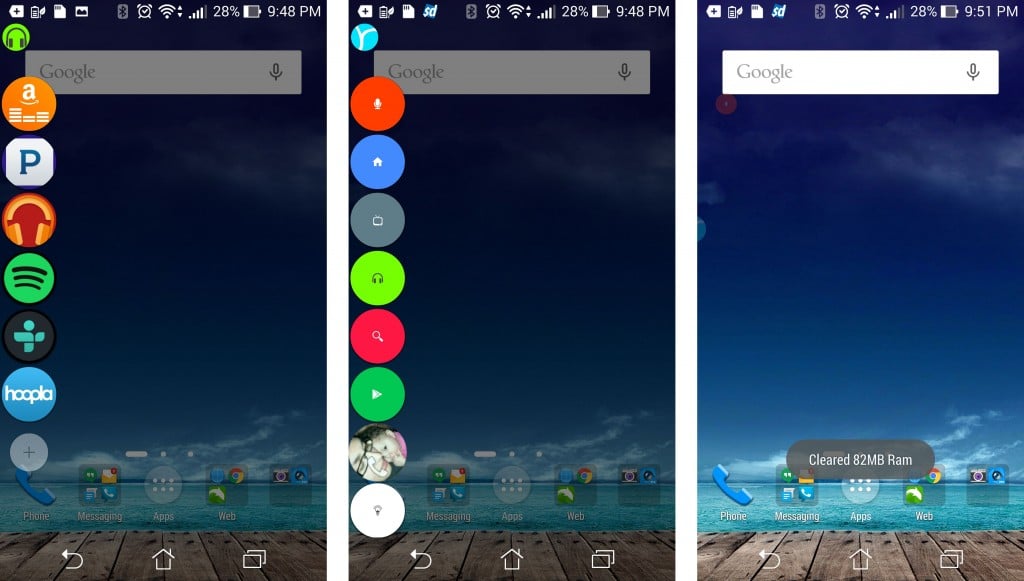 Who will enjoy Rovers Floating Launcher?

What I liked about Rovers Floating Launcher is that it is always on top of whatever app you are using and you can toggle settings, launch apps, etc… all without having to leave the application your are using. This is also a small annoyance at times. I sometimes found myself having to frequently move the trigger around so that it was not in the way of my keyboard. You can also hide and show the trigger at will via the notification tray.

If you are looking for a new launcher but aren’t quite ready to get rid of your current launcher, Rovers Floating Launcher is a good place to start. I recommend that you purchase the upgrades as they greatly increase the functionality of the app.

What could be better:

Rovers Floating Launcher is a little bit novelty and a little bit utility, but the utility is drastically increased by purchasing the upgrades. If not for the upgrades I’m not sure that I would keep the app installed on my phone. As it is, I find it a great companion app to my Asus PadFone X.

Download the Android P launcher on your smartphone today!