There’s a fairly new car-based game out; it combines simple gameplay, smooth visuals, customization, and lots of wild action. It’s called “Smashy Road: Arena”. It’s a follow-up to the title “Smashy Road: WANTED” by the developer BearBit Studios.
It’s a free game that’s family-friendly, and can be played as either single or multi-player.

Setting up the game is very simple. Just download from the Play Store to your device, and fire it up. It does tie to Google Play Games but if you’re not new to this (presuming you’re not) then off you’ll go. 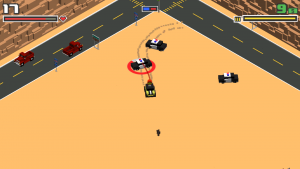 Once started, you really are thrown right into a single play starting screen, where you begin by tapping on a control. Before doing so, though, there’s also an “Online” button that you can press; this takes you out of single-player and puts you into a four-player death match game, where three other players are on the same track as you.

Also, if you do tap to play the single-player game, once in you’ll find a settings/gear 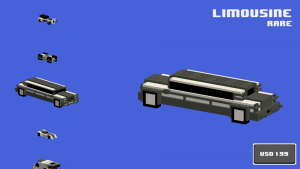 button to press. In here you can customize your vehicle. In the game there are 30 possible vehicles, 30 different paint schemes, and 10 weapons to choose from. As is common, you start out with only 1 option for each (the others are available for purchase, if you’re the truly impatient type). The others can become available as you accumulate time (and points) 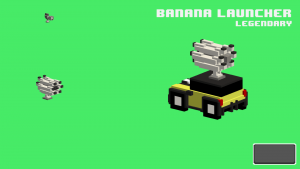 The controls couldn’t be simpler: you tap the left side of the screen to go left, and right to go right. That’s it. No accelerator, brakes, shifting, drifting or other driving control to worry about. There is one other control, and that’s weapon launch; but we’ll get to that shortly.
Once you tap and are going, your car is quickly brought to full acceleration. Your objective is to outrun and evade various police, SWAT, and military pursuit vehicles, all while trying to pick up cash and usable items, and also avoiding dead ends, corners, and sudden drop-offs. 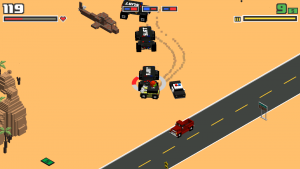 The pick-up items you can acquire can be cash (for future upgrading), fuel, health points, and assorted other accessories that can help you stay alive a little longer. You also have a weapon on top of your vehicle. You can’t just use it willy-nilly, though; if a pursuing vehicle stays within close range long enough (either by you keeping it close or it just out-driving you), 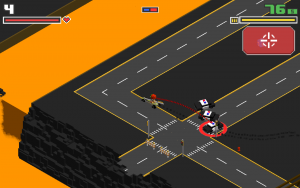 then a “fire” button will appear and you can blast the vehicle away, accumulating points and giving you some breathing room.
The more successful you are at staying alive and free, the more and more powerful the vehicles decide to join the chase; until it becomes extremely challenging to stay away.

The environment or ‘track’ you find yourself on (there are eight environments available) is generally a large square, made of a combination of city and country landscapes. The square has a definite edge to it, either by way of mountainside or sheer cliff. The mountain you’ll just bounce off of, going going over the cliff means instant death and “game over”.
There’s also quite a few cliffs on the interior of a given track, so you really have to watch where you’re going. If you’re not heading towards a cliff, there’s plenty of other obstacles to clear: houses, trees, buildings, railroad tracks, bridges, rocks, traffic flotsam, other vehicles….the list goes on.

Your game ends in one of four ways: 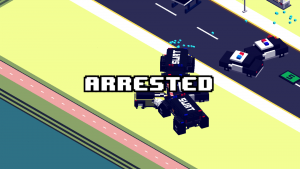 Smashy Road: Arena uses the now very popular graphic look of what I dub “8-bit 3D”. If you’re familiar with the game “Crossy Road” (similar name, but different developer), then you know what I’m talking about. 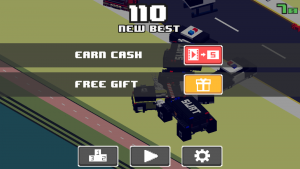 Colors are very saturated; and the 8-bit look doesn’t lose its charm here. It kind of gives the feel of playing an old-style game, but in a 3D world. The graphics are very fluid in their movement; I couldn’t detect a single slowdown or hiccup.  Very smooth.

One part of the game display I didn’t like is that the ‘zoom’ of the game seems kind of close-up. Once your car is at speed, it can be difficult to see upcoming railroad tracks, buildings, or cliffs. I died more often by driving straight off a mid-environment cliff than by being caught by police.
This gets better the more you play, but one has to play quite a bit (at least I did) to start getting comfortable with this. I’m sure it’s part of the gameplay strategy by the developer…zooming your view out farther would probably make it too easy. But still just a little farther would have upped the replay-ability, in my opinion.

Audio is great, though simple (again, likely by design). And it’s not the 8-bit synth you may expect, but rather realistic in nature. Music plays in the background, while assorted sound effects pop up right on time to the on-screen action.

I have to recommend Smashy Road: Arena. It’s a pretty fun car escape game that is definitely hair-raising to play, but not too complicated to scare people away. I do with the player’s view was a bit more zoomed out, but all-in-all it’s a quality title worthy of at least a download to give it a try.

https://youtu.be/ebjxK4F7VUs You've seen the game advertised inside of other apps - sling your arrow down a path,...