[dropcaps]S[/dropcaps]onic. Just saying the name reminds me how cool it was visiting my cousin who had that matte black Sega console. I was a Nintendo kid and thought the world of Mario. Although any kid growing up in the 90’s knew it was a showdown between Mario and Sonic. I could never possess myself to pick a victor.

Sonic sped onto the game scene as a blue hedgehog with lighting speed. He was an instant fan favorite with cult classics like Sonic the Hedgehog, 1-3. There was also a self-entitled tv series aptly named Sonic the Hedgehog, which lasted 2 seasons and had 26 episodes. Sonic was voiced by the talented Jaleel White a.k.a. Steve Urkel. Eventually getting spin-offs such as Sonic Underground and Adventures of Sonic the Hedgehog.

Sonics extensively outstanding body of work from games, tv, comics, etc. speaks for itself. This is why I can’t help but scratch my head. AngryBirds Sonic Dash Epic what a jumbled mess of a title.

What is AngryBirds Sonic Dash Epic?

Game titans Sega and Rovio collaborated for a 3-week celebration of  Sonic Dash’s 100 Million Downloads. Sonic Dash, available for download on the Google Play Store, gets angry with a little help from his friends, AngryBirds popular trio, Red, Chuck, and Bomb for a celebration of epic proportions. Epic characters will be appearing in Sonic Dash for a limited time however. 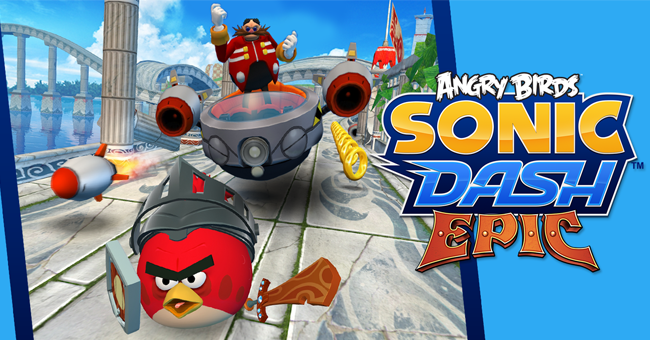 In this endless runner you’ll see flashes out of what made Sonic Great. Blurring through your screen collecting coins whilst avoiding traps and posing for the frame when he powers up. Straight awesomeness, although the date is now 2015 it’s no longer 1995.

So back to scratching my head. Sonic has had his share of time in the bright lights and unfortunately has had a decade of unsuccessful titles that Sega wished they had a time machine to delete from all our memories.

In theaters watching Disney’s Wreck it Ralph observing the cool blue hedgehogs cameo decked out in 3D was incredible as a fan-now-father. With today’s youth thinking all colored characters belong to the Sesame street gang. It’s tough on an aged hero who has had trouble transitioning platforms and time.

AngryBirds has been a monumental success on the mobile  gaming platform. So I understand the collaboration on Rovio’s end wanting a classic hero to help regain the stronghold that has been slipping from their birds beaks.

In Sonic Dash, he is still Sonic running, jumping off springs collecting gold hoops. The addition of AngryBirds did come at a price. Unfortunately, you’re unable play with the birds without first unlocking them individually by collecting 100 coins. I failed to mention you also can purchase them conveniently with in-app purchases. The game is solid and at times extremely fun. I am not sure this game resurrects Sonic or benefits AngryBirds but it does provide for at least an entertaining use of time.

This endless runner is a must play as the graphics are stunning and the fun is real! Remember this offer lasts for a limited time!

Have you played AngryBirds Sonic Dash Epic? Tell us what you thought in the comments below!