Streaming music is something I do on a daily basis for hours on end, so when Sony contacted me about trying out their Music Unlimited service I was extremely excited to see what the biggest name in music had to offer.

You’ll probably have heard about Music Unlimited as it is heavily integrated into Sony’s PS4, but they also offer a very feature-rich mobile app and web experience. In this review I will share my experience with using the Music Unlimited service across a range of devices and analyse different aspects from the selection of music Sony offers, to how they deal with organising your collection, all of which makes up the overall experience.

To pretence the review, the many music streaming services currently available all offer pretty much the same selection of music when it comes to the big players, so whilst I will touch on the selection of music available on Music Unlimited and how easy it was to find, this review will mainly focus on the value-added features that differentiate this service from the others. A further note must mention that Music Unlimited is available in two forms on the mobile platform through the Music Unlimited app (available to all Android devices) or if you own a Sony device through the Walkman app, both of which offer different experiences and I will highlight this throughout the review.

I could find every artist I searched for on Music Unlimited: Armin Van Buuren, Tiesto, Andrew Rayel, Martin Garrix, Professor Green, to name a few. Now these are fairly mainstream names that I would expect any music service to offer, but since I listen to these artists these are the ones that, for me at least, matter in music selection. For others, indie bands also turned up on Music Unlimited such as The Unicorns.

Music Unlimited certainly didn’t disappoint when it came to finding an artist or a song as their catalogue facilitated all my requests with no issues, but, as I mentioned before, it’s how that catalogue is presented to the user and how the stored music is orgranised that really differentiates services apart from each other.

For me, this is the most important part of any music streaming service. It’s all great if I know what I want to listen to, but I want a service that knows what I want to listen to, even if I don’t. By using my listening history, skipping habits, and library, I want a service to deliver an endless stream of similar songs or alternatives to discover artists and albums I never knew existed, but love.

Sony’s Music Unlimited attempts to do this to an extent, and the experience differs depending on which app you’re accessing the service through. With the standalone Sony Music Unlimited app, you’re able to see ‘Related Artists’ from a search but most significant is the ‘You Might Like’ section on the Home screen. This section does all the things I mentioned, but it isn’t customisable, meaning that if I don’t agree with a recommendation I cannot correct it and tell the app it is wrong. It would some effort to figure out what song in my library is causing this recommendation and then remove it. Whilst not significant, what this means is that if I use this section to continually play music (like I usually do), until I remove that offending song from my library that is causing the incorrect recommendation, that recommendation will remain and I’ll have to listen to it or manually skip it, every time. Compare that to Spotify’s radio feature that will learn when you ‘thumb down’ a track and it won’t appear again.

The Walkman app has no such feature and your music discovery will be limited to the top charts or the integrated ‘Channels’ that group songs based on genre, mood, or era. Both apps have the ‘Channels’ and ‘Chart’ feature but is very much a manual method of finding new songs as opposed to the seamless recommendations other services may offer. I did find myself sticking with what I knew when it came to using Music Unlimited, searching for songs I knew I wanted in my library and very rarely ventured into the music discovery realm.

Once you’ve found music that you like, the second most important aspect is how it is arranged. What’s the point of liking a song, saving it, to then never be able to find it again? Music Unlimited utilises playlists and libraries to organise your music. What’s great specifically here about the Walkman app is that if you have music stored on your local device it will pick it up and display it seamlessly with your online library – similar to that of Google Play Music, without the upload part.

Music can be added either to a playlist that can be dedicated to a specific purpose and will display the songs in a long list, or as songs/albums/artists. Songs can be added by simply tapping on the 3-dot menu and selecting the action for it. What’s good here about Music Unlimited is that if you add a song to a playlist it is automatically added to your library, allowing it to be broken out into that album/artist separation. Other music services don’t do that just yet, with those two organisation mechanisms remaining completely independent of each other, often making the user chose between which method they prefer or else resulting in double adding of songs to both playlist and library.

As previously mentioned, there are two experiences when it comes to accessing Music Unlimited and they are in the form of a standalone dedicated app, or baked in through the Walkman app if you have a Sony device.

The two apps achieve pretty much the same thing, aside from the aforementioned music organisational difference, but the Walkman app looks a lot nicer and seems much more polished. Using the Music Unlimited Service through the Walkman app was a much nicer experience and felt better, but then you are restricted to using a Sony device.

As for the Music Unlimited standalone app that is available for all Android devices, it could desperately do with a touch of material design, or a lick of paint for that matter. The design seems very dated and basic and although utilised the hamburger slide-out menu just didn’t appeal to me in the way the Walkman app did, or many competitors apps. Some of the colours of the music controls clashed with the album art, sometimes the album art would blend into the background and in the ‘Browse’ section it’s just a list of text.

Design aside, both apps are extremely easy to use and navigate and new users won’t have any trouble picking up the ropes. There’s even a useful tutorial upon initial launch of the Music Unlimited app to demonstrate how to download songs for offline playback.

This unfortunately echoes my comments above with the Music Unlimited mobile app; the interface will get you into Sony’s music streaming service and it works, but it’s not winning any awards for design. I would really like to see this updated to mimic the Walkman app at a minimum. 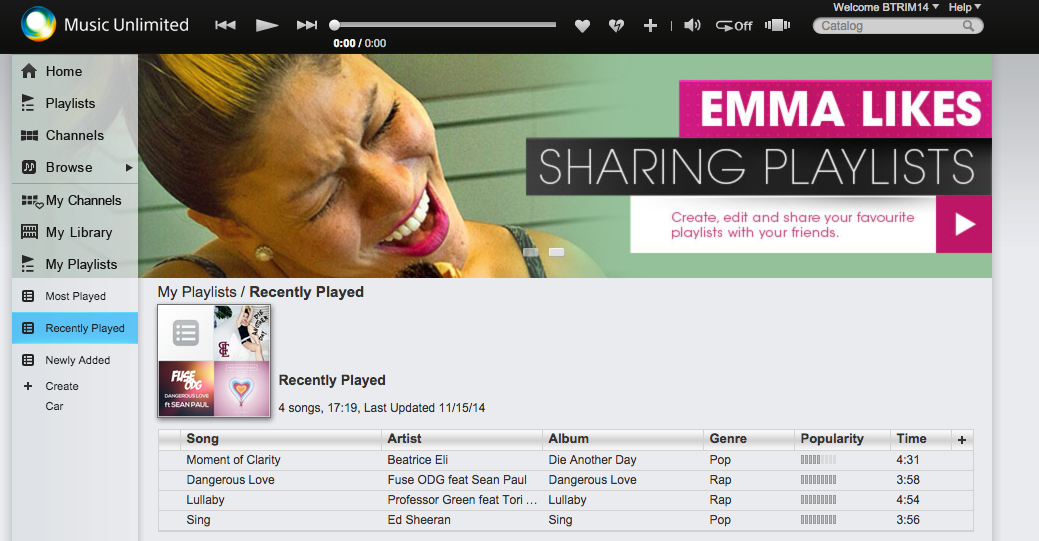 The appearance will look very familiar to the Music Unlimited app, which is good for consistency, and you’ll find all the similar features as with the mobile app.

At $4.99 a month for the ‘Access’ plan that will get you Music Unlimited on your PS3/PS4 and PC/Mac, or $9.99 a month to add in your smartphone, tablet, and TV, Music Unlimited is on par with other music streaming services when it comes to pricing.

For your money you’ll get access to the best music around the world right at your fingertips, with excellent music organisation, chart music discovery, and recommended music based on your listening habits. Music Unlimited certainly is up there as one of the top music streaming services, but the methods in which you access the service could definitely do with improvement when it comes to design. Whilst the Music Unlimited app will certainly get the job done, Music Unlimited is most definitely best enjoyed from a Sony device, and with a touch of material design for the Walkman app could see Music Unlimited winning the music streaming competition.