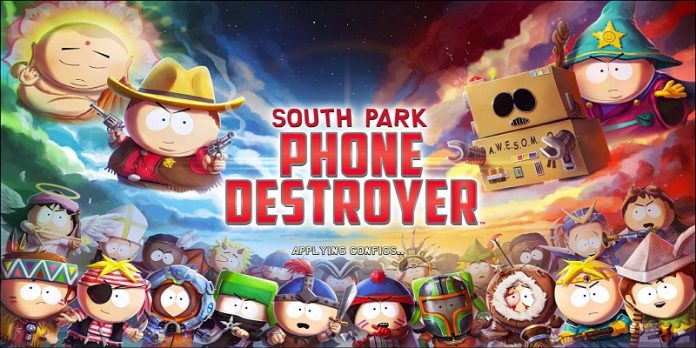 These days almost every popular franchise has a mobile app or two. And South Park, the low-fi animated series about a group of prepubescent misfits living in Colorado, is no different.

The raunchy cartoon series has been recently turned into a mobile game. Called South Park: Phone Destroyer, this is a card-based strategy game set in the South Park universe, complete with tons of inappropriate content.

It’s a freemium game, which means you’ll be able to continually play the game, although you’ll encounter a fair share of pay-to-win opportunities and skill/pay walls.

How to get started

Download the app from the Google Play Store. It’s free to get and install on your device. Launch the game and start playing. 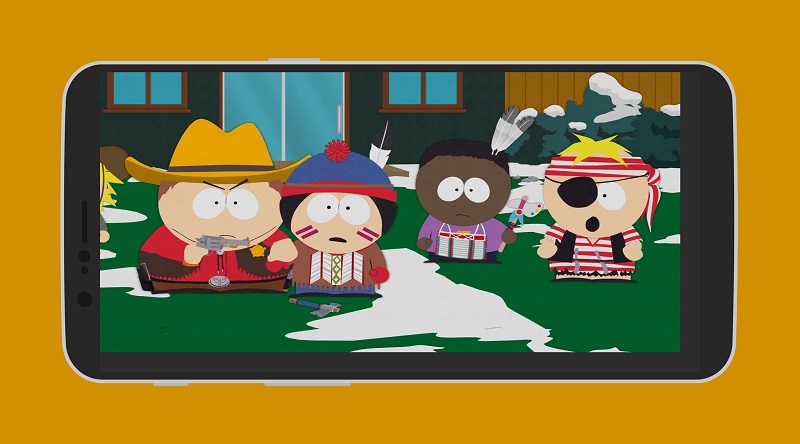 The South Park kids have gathered to play Cowboys and Indians. You are the New Kid, who has been recruited by Cartman to join the forces against Stan’s unbeatable team. And as the New Kid you quickly learn the drill.

You start off by playing some solo campaign stages that are classic card-based strategy. Basically you’ll have to battle your way to the end of the stage to see what type of boss Stan summons. And defeat other characters in the process.

Ok, so everyone is dressed up in costumes (which range from Cowboys and Indians to Wizards, Aliens, and Pirates) and fight each other. The team chats with each other via texts. 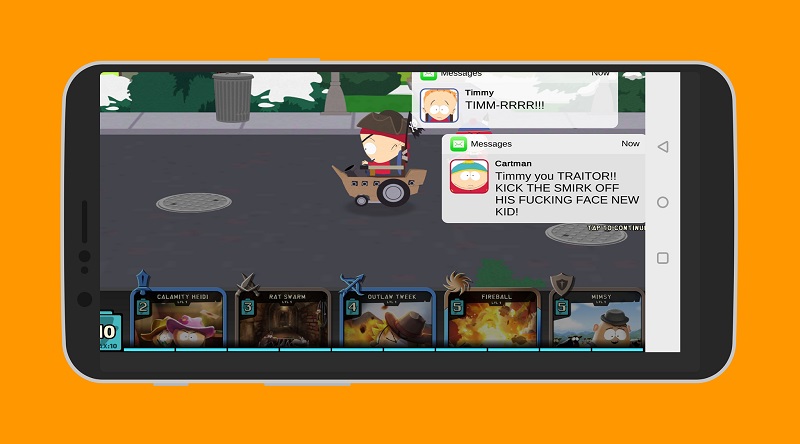 The battles are mostly automatic. You have a deck of cards you use to summon characters onto the battlefield. There’s also an energy bar and as you automatically regenerate energy, you get to pull out cards onto the playground. The main goal is to defeat the boss each level, but if the New Kid dies first, you will have to start over.

The cards come in five categories: tank, ranged, fighter, assassin, and spell. Obviously, they come with their own customary strengths and weaknesses. 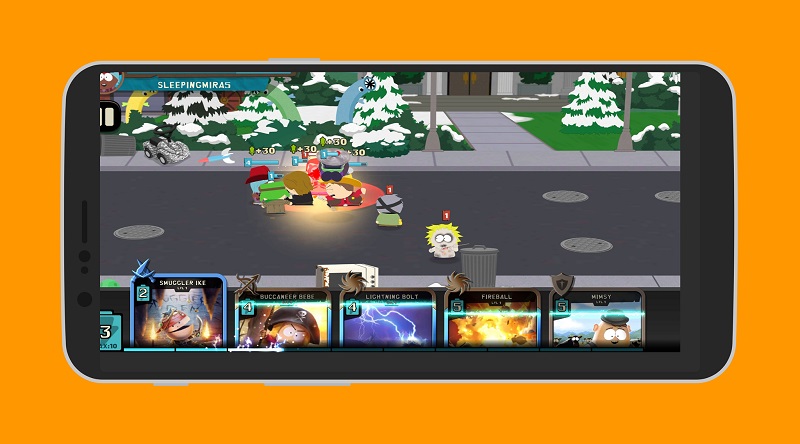 South Park fans will certainly appreciate all the familiar faces and voices, as well as the brand of dark humor that kept the TV show going for as long as it did.

Phone Destroyer is also peppered with PvP (player-versus-player). This mode works pretty similarly although this time you’re on a timer. So you could end up losing by having less health than your opponent when the time runs out. 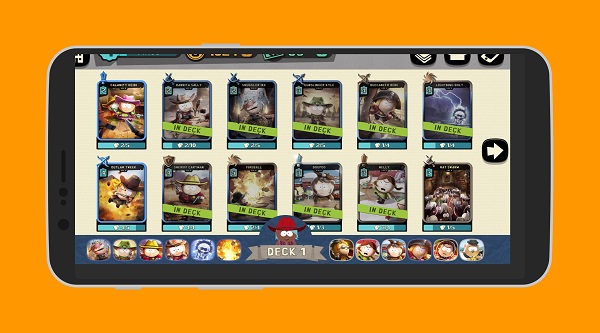 As I mentioned above, Phone Destroyer does feature some additional themes beyond Cowboys and Indians. Unfortunately, it takes a lot of playing through solo stages and PvP to unlock them. And I mean a lot!

Then you’ll need to go back through the solo stages on a harder difficulty or play even more PvP matches, if you want to upgrade your cards or to progress at all. As you make headway, you’ll find the PvP maestro Don King Buttons, might not let you go any further unless you complete the required amount of PvP matches. Being forced into these PvP matches quickly become quite irritating. 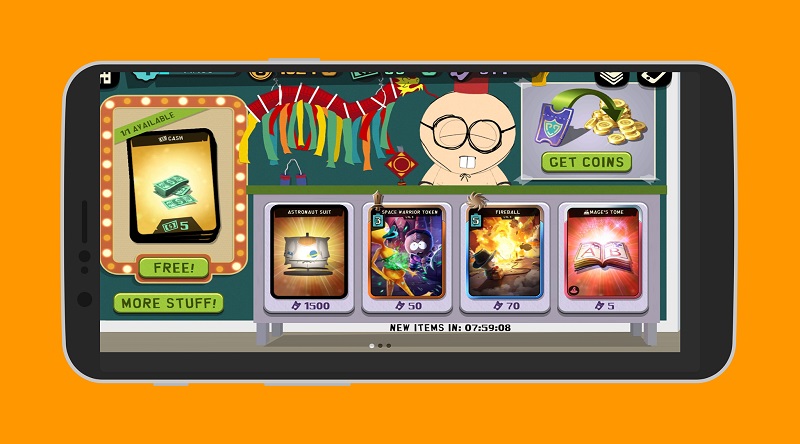 I get it, it really pays to have the most powerful cards, so I understand why the game encourages grinding, but playing the same missions and PvP battles becomes extremely dull after a while.  It actually made me abandon the game for a few days, but I eventually returned with renewed strength (of mind).

The game also ends up eating a lot of your time. It’s not a game you pick up when you have a few minutes to spare and leave at any time. No, you’ll have to come back to it over and over again. That is if you want to unlock certain themes or advanced to more advanced stages. 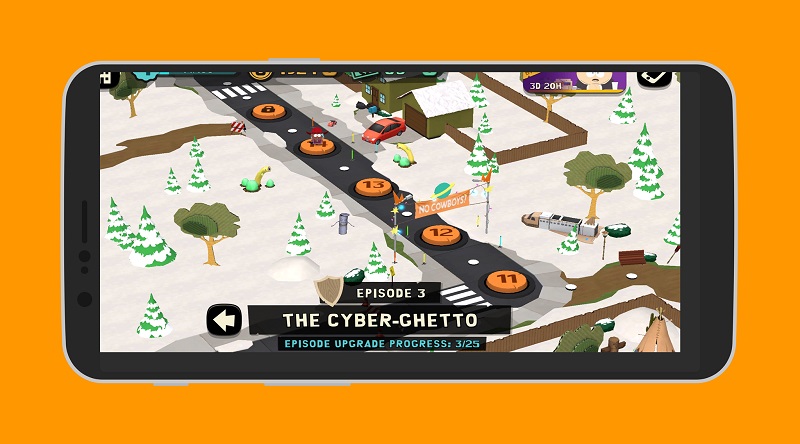 Another thing that becomes apparent after spending some time with the game: tactical prowess doesn’t seem to matter that much. Most of the time, scattering as many units as you can on the battlefield tends to have the desired effect. No artifices needed.

To be frank, for the most part, I was only half-playing battles. Meaning I was paying attention occasionally while making sure I was dropping my best cards when things got nasty. You can change the course of the characters who advance in a similar pattern. 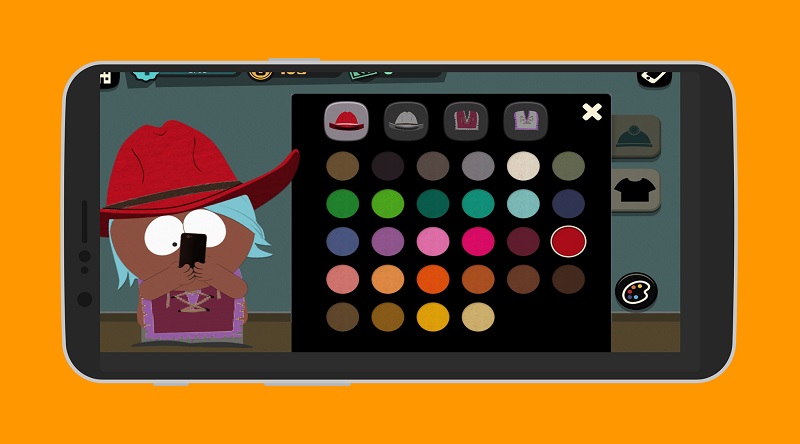 What about this New Kid character? Well, you get to customize him or her by changing their appearance (skin color, hair) and outfit (headgear and clothes). Unfortunately, although your character levels up, it has no actual bearing on gameplay. You get no additional development that affects the overall story.

Phone Destroyer is a challenging game which draws you in and gets you excited quite fast. However, it doesn’t do such a great job at converting this initial enthusiasm into addiction. It’s heavily focused on grinding, so if you don’t like doing pretty much the same thing over and over again to get upgrades, you will get disheartened fast. Additionally, I wish there was some added complexity to the overall story, which often feels flat.