For as long as I can remember, I have always enjoyed casual games on smartphones. Even dating back to pre-Android days I am fan of games that I can pick up, play for a few minutes, and then put down and forget about. Nothing passes the time as easily, in my opinion, as spending a couple of minutes with a game with high replay value. 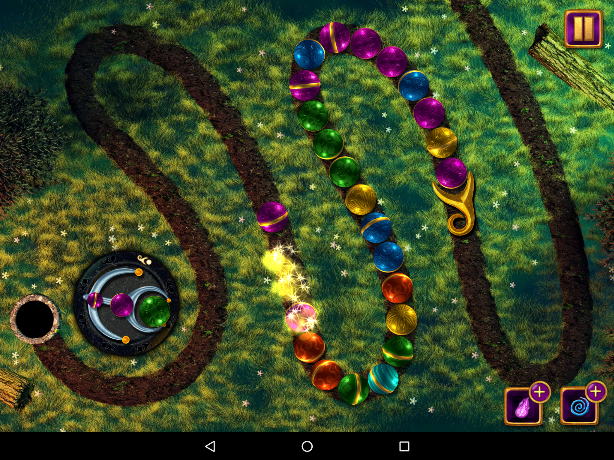 Even with the advancements in today’s smartphones and all of the hardware performance at my fingertips, I tend to opt for the more laid back and casual title. Not that I would not mind playing some of these games that have hours and hours of campaign or head-to-head capabilities mind you. It is just that I do not have that much time to devote on a consistent basis.

I recently installed a game called Sparkle Epic by the developers 10tons Ltd. If you have spent much time in the Google Play Store then you will have surely seen this sort of gameplay mechanic. Players are tasked with the simple premise of matching up colored orbs as a “train” of them head towards a destination. Simply match three or more of the orbs together and they disappear from the train. You’ll have to think quickly because the group of them does not stop. It may pause temporarily, however it will get back in moving before long. 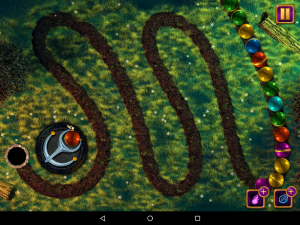 Once the line of orbs reach its destination, which is a hole in this case, you lose a life. Players are given five lives to start, with a new one regenerating every 30 minutes. If you go through all five of your lives, you can start fresh again in two and a half hours.

Sparkle Epic is a free game to play, however it can quickly cost you money if you are not careful. Read on for more about in-app purchases and how they can help you out… or chip away at your wallet.

I started out with this game and flew through the first 20 or so levels without any trouble. Although they did get increasingly harder, it took a couple dozen levels before I was running through my lives. To help you out, the game offers Boosts and Powerups.

Every so often players are given boosts as a reward which can then help gain the upper edge on a level. These are limited in quantity and are not given all that often so use them sparingly or only when you are struggling.

In the first few levels you’ll start out with one line of orbs heading toward one destination. Before you know it, there are multiple lines following after each other and/or two lines at one time heading to separate destinations. 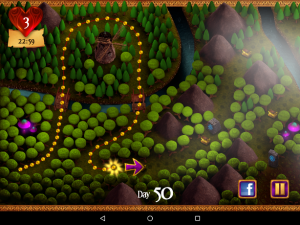 The game requires quick thinking to be sure. If it were up to me, I would sell a $5 version of this that comes with a whole array of boosts right out of the gate. Alternatively, I would like to see chances to win more powerups along the way. The game can get frustrating so do note that you may return to a level time and again. I am not ready to buy my way out of labels all that quickly so I give it a good few days before I get so frustrated.

The game itself is quite vibrant and easy to play. You get a sense of real physics in this one as the orbs feel like there is a certain weight to them. The sound matches up nicely give the orbs a realistic and familiar sound.

The soundtrack reminds me a little bit of what you might find in the Lord of the Rings or Harry Potter. Having said that, it tends to get repetitive if you play this game often.

There’s an optional Facebook login for those of you who might want to hop around from one device to another. Once logged in, your game is synchronized to your account. This means you won’t have to start over from the beginning when you upgrade your phone or switch to a tablet. 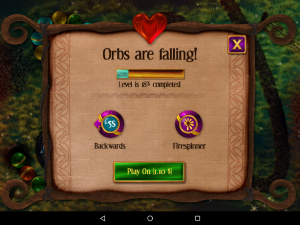 One thing that I would love to be able to do in this game is to go back and try my hand at earlier levels. Indeed, the game keeps track of how many orbs you use as well as your longest string of combinations. I would really like to be able to redo a level to see if I can get a quicker time or better combination. Alas, once you complete a level you are stuck with the spot.

I am currently in level 50 and have spent a few days of downtime here. I’d love to go back and practice a little bit on some earlier levels and try some different tactics, however that’s simply just not possible.

Playing the game can definitely lead to some impulse buying. You may find yourself getting close to finishing a level and ending up at, let’s say 80% completion. Not ready to start over or waste life? The game will essentially let you buy your way out of it. It is possible to continue to pay $1.10 at a time to keep from ending your turn. Be careful, this can get pretty expensive over time.

I am a fraction (1/6) of the way through the game’s 300 levels and I’ve already dropped a few dollars on this. Strangely, I would like to see more options for in-app purchases to where I can purchase groups of boosts to help along the way. I don’t care so much for purchasing them one at a time or in emergency situations. I would prefer to be able to buy a chunk of boosts to help me over a 24-hour period or 7 days … or something along those lines. 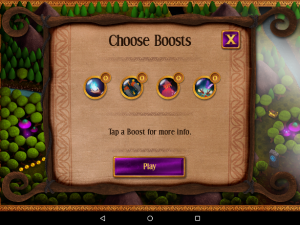 This is not the first game of its kind, and isn’t even the first of this style from the developer. But, after playing a few of the titles from 10tons, I like this mechanic the best.  It’s not all that different from some of its previous efforts, but it’s enough to merit another game.

Although this one is available for both phone and tablet, I really think this works best on the larger displays. There’s just something about this one that doesn’t work as well and the four and five in size screen. Open it up on an 8 or 9 inch tablet, or even larger, and you’ll see that there is plenty of attention to detail and graphics. It also gives you a better sense of control over your orbs.

Sparkle Epic draws you in and sinks its teeth into you pretty quickly. But, once you start to spin the wheels in the mud, you’ll be facing an uphill battle from that point out. You can try to go it alone, but I’m betting you’ll drop a few dollars along the way. As to how much you really want to invest in this one, though, that’s debatable. Once I get to about $10 invested in the game I am likely calling it quits.