Lots of Android games want to wow you with crazy, hair-raising action, speed, and wild graphics. Their mission is to pull you in with the promise of a frenetic pace, testing your reflexes and concentration in the face of unrelenting distractions. 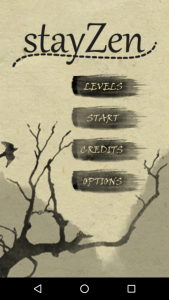 stayZen is an Android game that tries to go in another direction. This is a game that is trying to be a bit of a meditation app. Or it could be a meditation app masking itself as a bit of gaming fun. It comes from Canadian developer PeaceOut Games. It is suitable for all ages; though young kids may have trouble keeping the game going, while even tweens may not appreciate the purposeful speed of this title.
If you’re curious by just what I mean, keep reading to see what this game/app is all about.

Install and setup is very straightforward. Simply download from the Play Store and fire it up. Once in the title screen, you have a couple of choices. “Levels” shows you the level map with all the different worlds & levels you’re in for. “Options” lets you choose some gameplay preferences such as music on/off, player avatar, and both gravity & enzo strength (more on these in a minute).
Otherwise you just press “Start” and you’re in. 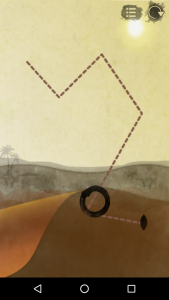 As I stated before, stayZen gameplay feels like a mix of game and zen-practice app. The idea of the game is to move your avatar (which starts as a Japanese-style painted circle but can be changed as you progress through the game) along a predetermined path on your screen to a unopened lotus blossom. Upon reaching your goal, your blossom blooms into a flower. Your main antagonist here is simple gravity; your avatar will always be pulled downward, and it’s your job to fight gravity while not veering off your line.

You move your stayZen avatar by ‘painting’ it along the path by repeatedly making small swipes in the direction you want your avatar to go. While going in a straight left-to-right line, you need to swipe up and to the right to counter gravity and to move your avatar closer to your goal. This swiping is your ‘enzo’. So as stated before, you can (slightly) adjust both the gravity and enzo strength in the game to change things up. 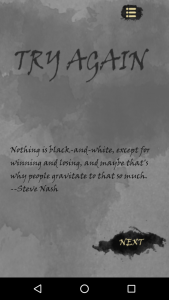 The idea behind this game is not to blast through the levels as fast as you can or to acquire as many power-ups/coins/avatars as possible; rather, it’s to find a “zone” in which you are painting your avatar safely along its path. Slowly is just fine here; you won’t find any points or timers here.
After finishing a level, you are simply treated with a philosophical quote from various public figures….everybody from Gandhi himself to Mia Hamm (seriously!).

As you can imagine, the paths start as rather easy in the early levels, but quickly increase in difficulty. In addition, the game will add obstacles that you have to steer around (such as scorpions) and other path variations that turn it into more of a platformer. 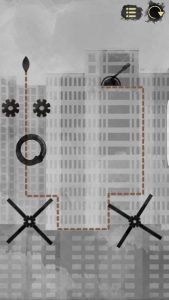 Graphics in this game are very high-quality, with the backgrounds getting a nice vellum or scroll paper treatment. Most items shown in the game are simple black silhouettes, adding to the sunset-esque quality of the game lighting.

Music is also very well done, in the form of a soothing flute playing continuously throughout your experience. The only jarring moment comes when your avatar becomes separated from your path; a jarring gong indicates that your round is over along with your avatar free-falling off the bottom of your device’s screen.

stayZen is a rather soothing variation on a platform game, to the point where you could use this title as a game or as a relaxation app. I have to say, I rather enjoyed playing through the levels. The combination of the relaxing visuals, music, and “painting” gameplay mechanic did tend to settle me while playing.

If pressed, I would say the main critique I would have is that the level variation could start to happen a bit earlier than it currently does. It takes several levels to start to see some truly different levels (at least for my preference). But then again, that is probably exactly as the developer intended the game to be to allow for a deeper and longer engagement in the zen-like quality of the presentation before testing you with more varied and difficult levels.

As a bonus, the developer has just recently updated the game,with smoother gameplay and controls, which shows a good commitment to the title for the foreseeable future. In the end, I do highly recommend this game, and feel that you can’t go wrong with giving it a try. Download here and see if you feel the same.