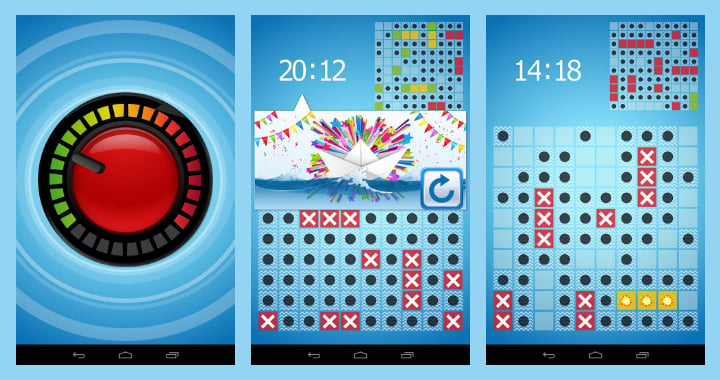 The classic strategy board game of Battleships is available in numerous Android iterations, one of which we recently took for a spin. Called Super Battleships, it’s a free download from a developer known as Easy-Lab.

Upon opening the app you’re greeted with a big red button with an arrow directing you to unlock to the right. With no written description or indicator advising what lies ahead we were somewhat curious as to whether this was the right game; there was no splash welcome screen with the game title.  That said, a simple tap of the button and you’re tossed into a game. Reading the app description, we’re told there are multiple degrees of difficulty. It’s possible that green-to-red scale that wraps the red button is a way of changing settings however it was not immediately obvious. 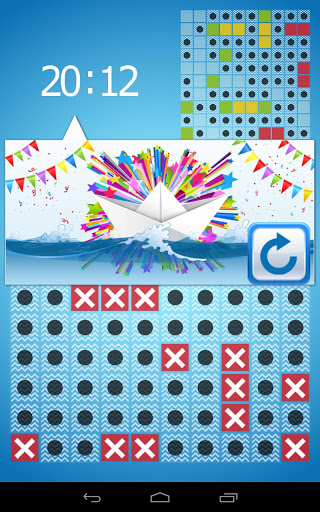 There appears to be but one game mode for Super Battleships in that it is a single player game against the computer. While this might work for most people, we would have liked to been given an option to play and pass with another player.

Players are given 20 spots to scatter across the board, with ship sizes varying from 1 to 4 pegs total. If you’re the kind of person who doesn’t care and just wants to get into it, the game will randomly shake things for you. We noticed that when we attempted to place pieces about the board that it would not let us put them in adjacent or intersecting spots. Given that this is available in the board game version, we would like to see that here as well.

Your board is shown in the upper right corner while you guess where your opponent is by using the big board in the center. A hit results in an immediate followup while a miss turns things over to the computer who tries to locate your ship(s). Also, should you land a hit on a peg, you’ll be shown some adjacent spots where the opponent will not be located.  After a time or two through the game you’ll be able to move quickly to detect the computer’s spots. Where things get tricky are in the single-peg ships as they can be scattered all over.

Graphics are very simple but there’s not a lot you can do for a peg-based layout. If we could make a suggestion, we wouldn’t mind seeing an occasional image of a ship being hit or an animation of a battleship sinking. If not for every time, at least for the bigger ones.