As kids, most of us played a game, be it with branded blocks or whatever items we had lying around, where each player would take a turn adding another block onto the previous one. This would create a growing tower, balanced by the skill of the stacking players.
Turns would be taken, and higher the tower would become. The tension would build, and at some point a mistake in placement would be made…and down the tower would come in a grand and loud crash.

That was the big payoff; it mostly didn’t matter who won, but it was the buildup and inevitable crash that made it fun. 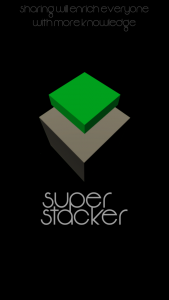 Well, you can get most of those feelings in Super Stacker, an Android game you can get completely free in the Play Store. Super Stacker brings back that buildup and tension from your childhood game to your portable device. It’s a pretty simple game that lets you pick it up, play for a few rounds, and completely forget about it until next time. Which is exactly it’s point in life.

You begin with a rotating table/surface, with a large square block floating above it. The table/surface rotates while the block sites stationary.  You place the block by tapping on the screen. Then  the table (with the newly placed block) switches rotation direction (clockwise to counter-clockwise), and another block of the same size appears above, awaiting your tap. You repeat this process, and as you go up in tower size, the blocks get increasingly smaller, passing a Jenga-size block, onto extremely skinny sticks. In terms of controls, I would consider the game “good”, but we’re talking about repeated tapping here, so it would probably be pretty hard to get that wrong. 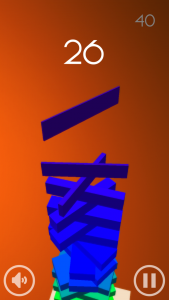 you place. This of course gets more and more difficult as the tower grows and your next block gets even skinnier.
The game does attempt to help you; as each block passes over the top block on the tower below it, it flashes white; this indicates that if you tap the screen now the block will drop in exactly the same orientation as the one below it, with of course maximizes the stability of the tower at that point.

You would think one could find a rhythm and line up most blocks pretty easily, but the game does a good job with geometry, speed, and rotation to mess with you. Also, the visuals and sound well-done for a game of this type: clean and unobtrusive. Other than the blocks, the only other major visual is your score high and center, which equals the number of blocks successfully stacked (my high score is 41, btw).

The game does have a negative in my opinion, but it’s a big one. During a physical version of this type of game (and as I stated earlier), most of the fun is in the simply buildup of tension and anticipation as the tower gets taller, and closer to it’s ultimate demise. The big payoff is when that fatal mistake is made, and the big, loud, messy crash brings the game to a definite and satisfying end. 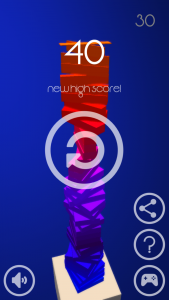 With Super Stacker, this climax is completely missed. When the top block is set askew, instead of a grand cacophony of crashing blocks,

And that’s it. You really feel left hanging with that kind of ending, and it’s one that takes you from feeling “Hey this is pretty fun!” to “Really? That’s it? Hmph.”. To me that’s the crux of this game, and if the developer can create a couple of random crash scenes to provide, this game’s value goes way, way up.