When I did my initial research to decide whether or not to move from my Blackberry to an Android device I was concerned with all of the discussion of tethering – or rather the lack of tethering support – for Android devices.  I didn’t want to root my phone and wanted to simply install an app liked I’d done on my Blackberry.  While I don’t need to tether all the time, I regularly used an application on the Blackberry called Tetherberry.  (The company has since changed names to Tether and is in closed beta with an app for the Android which I look forward to testing in the future and reviewing for you as well).  Tethering is especially handy in airports, hotels with expensive per-night Internet connections, and long car rides. 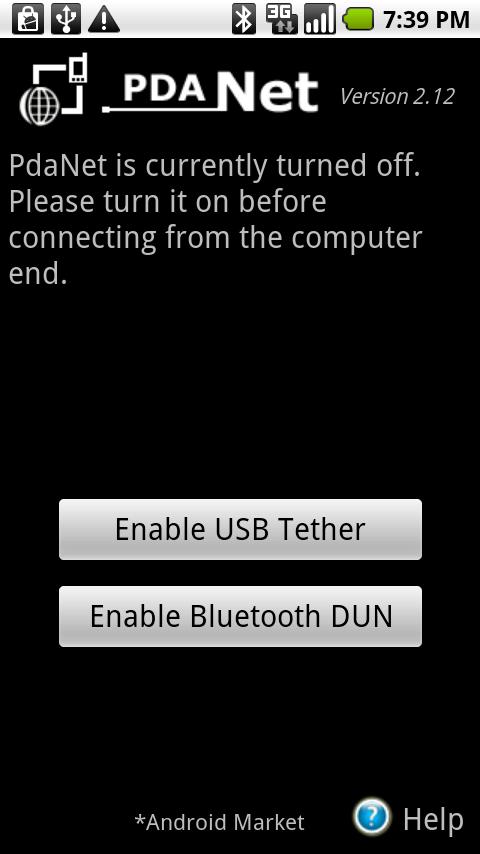 One of the features that I love is that you are purchasing the license for the phone app so you can install on as many computers as you need.  I have both a netbook and a MacBook so this gives me the added convenience and cost savings of not having to buy extra licenses. PDANet works great on both PC and Mac. (According to the manufacturer, PDANet for Linux is available only on Android 2.0 and above and supports only the Bluetooth Dial-Up Networking [DUN] feature of PDANet – tethering via USB is not currently supported for Linux).

Once you have the software installed on both the computer and the phone you connect the two devices via your USB cable, start the application on the phone, click the ‘Connect’ option on the computer and you are off and running.  I’ve seen good speeds with PDANet – although I do feel I got better speeds with Tether on the Blackberry.  Speed does vary quite a bit based on cellular coverage/3G availability, but I can usually accomplish the things I need to get done with PDANet.  I’m able to log in to my VPN for the office, have Outlook running, and two or three tabs in a browser (perhaps with Gmail, my bank, and of course  AndroidGals!). I’ve even uploaded a few digital pictures from my Nikon camera to online photo sites via PDANet. It was a bit slow, but the job got done.

You can also connect via Bluetooth DUN with PDANet.  In this setup, you download the app from the market (or if you already have it installed, just start it).  Then pair the computer with the phone and walk through a few configuration steps (which are included on the PDANet web site) and you’re all set. I’ve used this feature only once just to test it out.  It worked okay, but I’m usually grabbing a quick charge for my Android on the USB cable while I’m working.

One of the features of PDANet on Android that I love is that I can use it while I’m using other apps and features of my phone.  I’m on Verizon and have tested this on both a PC and a Mac.  If I’m on a conference call I can surf the web or check my email and be on the phone at the same time.  If I’m trying to plan an event with my sister that requires both talking on the phone and being online I can do that easily.  I can also send text messages to my nieces while we’re on the phone and I’m on the web.

The application costs $23.95 – although at the time this was written there was a special for $18.95 available.  After the one time  purchase cost, I’ve never had to pay for anything else.  A free fourteen day trial of the full software is available.  After fourteen days, the free version will continue to work, but will not allow log in to secure web sites.  For some, this version may be sufficient for your needs but I think the $23.95 is a great investment.  Upgrades are free and the application thus far has been well maintained.