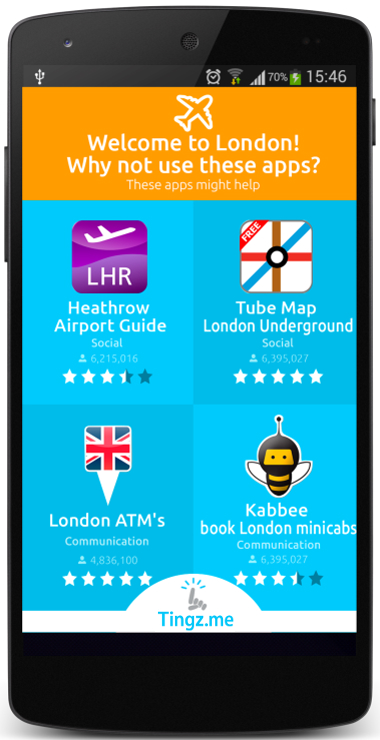 Tingz.me is an app that looks to help you in app discovery by monitoring your usage, and then recommending apps to you based on your usage. While it’s a neat idea and they try to present it in a simple package, the app needs some polish.

When you first open the app, it walks you through an explanation of what the app does, and how to use the app. You can look at this in the gallery below. However, while it tells you that you can discover apps and that it “always” is looking for apps that suit your context (it tells you this three times… a little creepy if you ask me, kind of like the song “Every Breath You Take” by the Police), how the app works is unclear, though after talking with the developer this is part of the apps purpose to be simple. Note: To be clear, this is how I feel about the introduction, as the actual permissions for the app are minimal compared to other app recommendation apps. See below for more.

After the initial walk-through, it provides an initial recommendation, and it is hard to tell if it is based on you or if it’s the same for everyone because mine looks almost exactly the same as the image from the Play Store except mine included Pushbullet. After that, there’s not much to do with the app, other than you can go to the settings and Share, Rate, or Contact the app developers, and you can also choose to log into Facebook (also unclear as to what this is for, though it can’t post to your profile) and toggle whether or not to have a sound go off when you get a notification (but not whether or not you even want a notification). The developer said that they are doing their best to design the app to be unobtrusive, but having notifications is part of the experience and what the app aims to do.

What’s odd about the app’s interface, is it is simple and easy to use. However, when you first open the app, it looks as though the app is going to be pretty and fun to use. Once you get to the main interface however, the colors clash, and the app icons for the recommendations are pixellated and fuzzy. The animations are rushed and jagged. It’s like they focused way more time on the introduction (and their website) then on the app itself. However, I’ve talked with the developer of the app, and they said they are aware of how the app looks, and it is one of the main things they are currently working on.

When I first started using the app, it was unclear how it worked and what exactly its purpose was, and I wasn’t getting many recommendations (after only using it for a couple of days). When talking with the developer, they admitted that me not understanding what the app does is their fault, and something they need to work on. They went on to tell me that the app works by reading what apps you are using on your phone (not the information inside them). It reads how often you use those apps, and looks for habits. So in theory, the app gives you recommendations based on your habits at the exact time you might need them. For example, if every day you open an app that tracks your morning jog, such as My Tracks, Tingz.me will note that. After several days of doing this, the app will recommend to you in the morning some apps that might compliment the app you currently use. So after your run, you’ll get a notification from Tingz.me providing apps such as MyFitnessPal, Endomondo, and more. It does all of this with minimal permissions, only reading the apps you use, and what accounts are on your phone essentially.

After understanding this, I used the app for a couple of weeks, and started to understand a bit more how the app worked. I got some more recommendations, like on Sunday while opening theScore app several times to get updates on an American football game, I got recommendations of other sports apps: Team Stream by Bleacher Report, FTBpro – The Soccer News app, 365Scores: Live Scores & News, and Sports Republic.

It wasn’t a perfect system, but there were a couple of times were a recommendation was good, and I downloaded a couple of apps. However, I had no experience of it suggesting at a certain time based on my habits. Every time I got a suggestion, it was simply at the same time as me opening a bunch of apps that are similar in one sitting (or the same app over and over). The developer again assured me that they are working to make it a better all the time.

While this is a neat concept, and the simplicity of it would make it desirable, the interface is currently too hard to look at, and while I know have a better understanding of how the app works, most users won’t by simply downloading and using the app. It is worth mentioning that the developers don’t receive any payment from the apps they recommend, so it is based solely on their research.

They seem to update the app frequently, and the developer says they are constantly working to make it a better experience. So if you like the idea, and are OK with sticking with an app for its updates, than give it a shot.