If you’ve played the likes of the Subway Surfers and Temple Run series of games (lord knows our house has), you may like the game “Two Roads” by Al Kamil Softech. Two Roads takes this well-worn genre and moves it into a new direction— up! To get the game, simply head over to the Play Store and download.
In this game you play a little alien named Frothy, who has been captured here on earth. When his cage is left open, Frothy finds his (her?) chance to escape back to the home planet. That’s your setup, and you take over Frothy in trying to get back home.

The game is played through an endless spaceship-looking tube. This tube is a bit of a maze, made of both stationary, and later, moving blocks that kill on impact.  Also included along the path are familiar items, mainly coins to collect, as well as some performance-enhancing items (magnets to help collect coins all around you, speed boosts to make you super-fast and invincible for short periods, etc).

As Frothy moves through this obstacle-riddled path (at a constant speed), you control 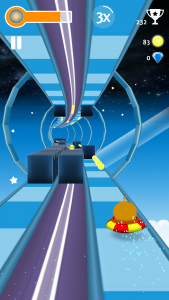 This game’s main feature is in the Swiping up and down actions. Whereas in other games of this type, these actions would result in a jump or tuck-and-roll, respectively, in Two Roads swiping up sends you to the top of your display where there’s a second path! This path is generally different in its layout from the first, and it gives the game a fresh perspective and doubles your options at any given time. I lump all these game attributes together for a reason, that being that the same could be said for every one. While each does a fine job, there’s just a little something missing from them. The controls can miss a swipe or contain a slight delay from time to time. The sound and graphics are both ‘good’, but they both are missing just a little more variety/creativity in their presentation. It all adds up to a slightly underwhelming experience as a player.

I do enjoy playing Two Roads; and I personally found myself clicking back into the game when I had 5 minutes to spare. The extra dimension of a parallel upper road in which to maneuver on gave this game type a fresh look, and with a bit more polish in the controls, sound, and graphics, this game could see its download count skyrocket.