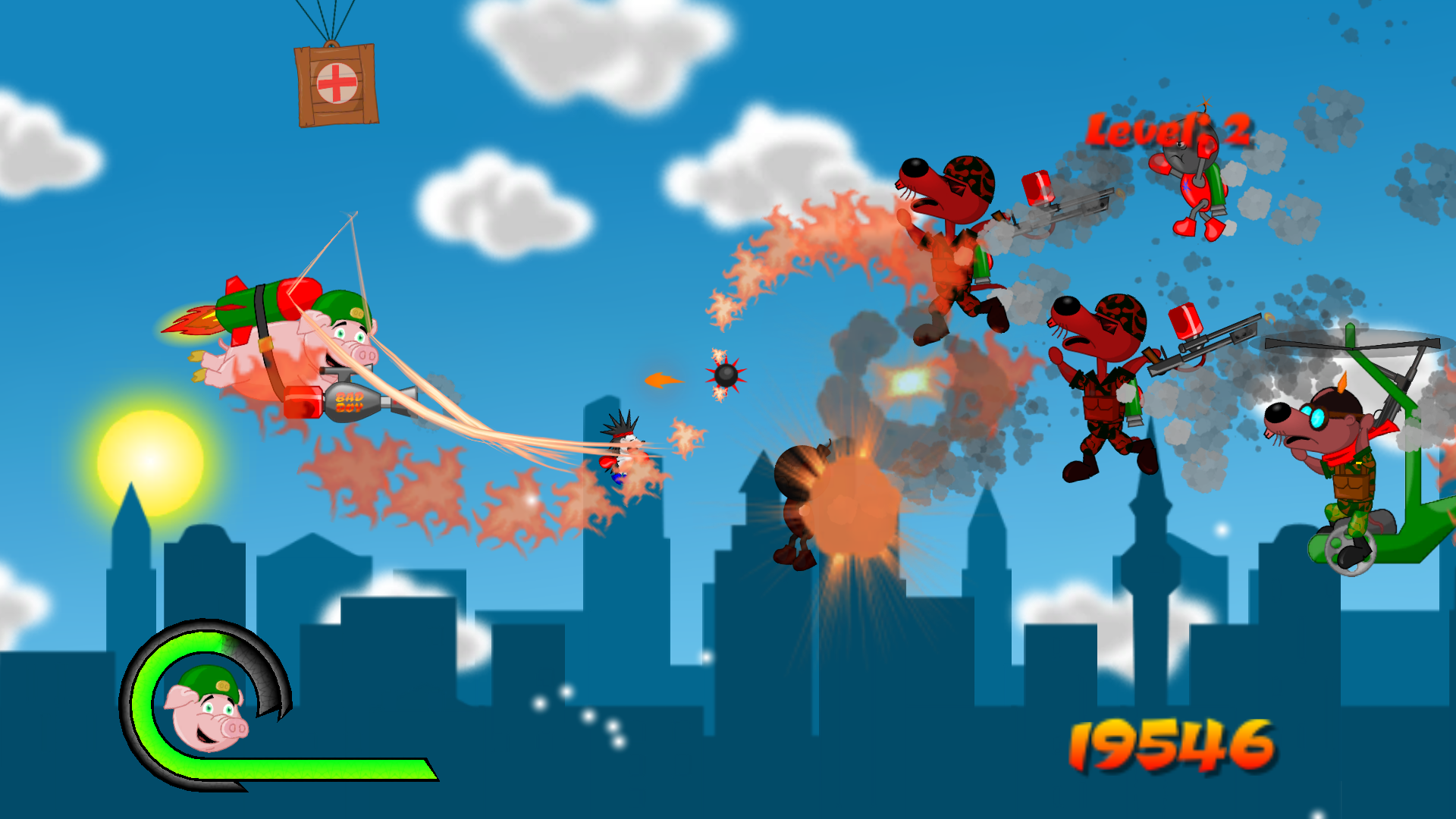 Jetpack Pig Warrior is simple game that puts the player in the position of a highly skilled pig operative that flies around the screen in the direction of the player’s command. The enemies in the game, General von Rat’s minions, will drop in from the sky above or from the right side of the screen to attack the player. Rack up as much points as you can from defeating these enemies, and try to stay alive as long as possible. 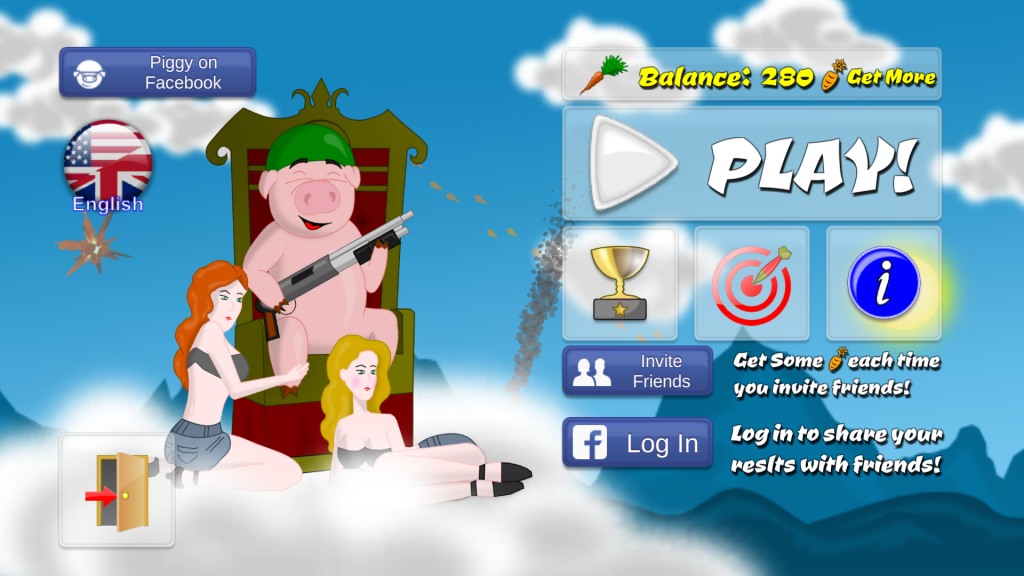 To start off, the game will greet you with the main menu that directs you to the “Play” button. Once tapped, the player can choose a weapon, a head start bonus, a companion, and miscellaneous perks. From the weapon menu, you can choose from the default pistol, or spend in game points for a Shotgun, Bad Boy, Missile Launcher, Flame Thrower, Chainsaw Gun and WWII SMG. I had a good time with the Bad Boy gun, which shot out cannonballs that spewed fire around them, causing a wide area of damage. The companions menu consisted of War Piggy’s four different friends to bring along to back him up.

This game is not very sophisticated, and you’ll find yourself familiar with the game almost immediately. Tap and hold on any part of the screen to move War Piggy to where you want to go, while he is automatically shooting enemies. Keep in mind, ammunition is unlimited, so you never have to worry about how much the pig is firing away. Power-ups will be dropped down from the sky such as health, armor and different guns. 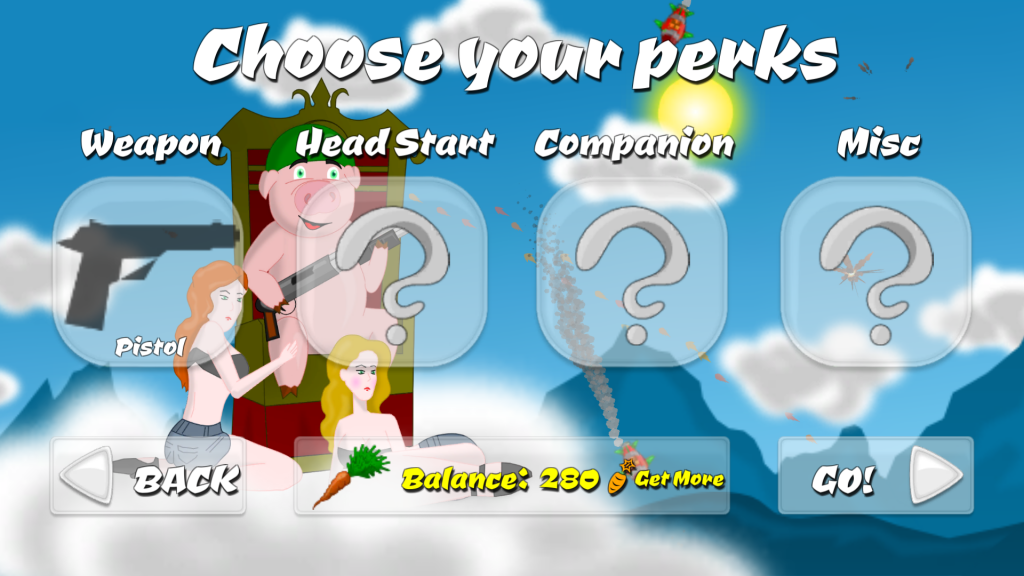 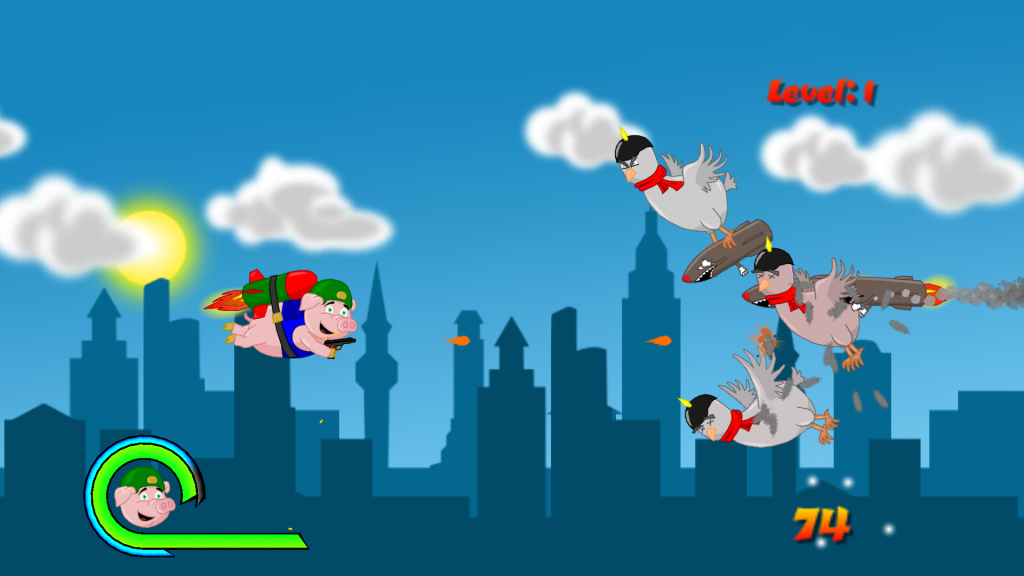 I found the gameplay to be uninspiring, however. Never did I feel like I was playing something different and special. I enjoyed the theme and the ridiculousness of War Piggy wreaking havoc on General von Rat’s minions, but the gameplay didn’t quite match the creativity of the style. Once reaching the end of the first tier, you get into a classic boss fight with von Rat’s ship, but the best way to describe the fight was boring and tedious. Not much skill was required of you, other than dodging the ship’s bullets as War Piggy automatically fires back for you. But taking down this boss took much longer than it should have.

I had some fun with Jetpack Pig Warrior, but it needs more polished gameplay that will keep players hooked. There wasn’t much about this game that wasn’t a skinned over version of Jetpack Joyride or the many other similar flying games on the Google Play Store. I look forward to more updates from developer Yuri Nudelman, and possibly more games in the future.