I don’t know about you but I am a big fan of film noir. These movies rely on the subtle interplay between light and shadows to create an eerie, oppressive atmosphere that for me remains unmatched by today’s mystery thrillers and horrors.

Well, the developers of this game I’ve been playing for the past week have tried to port this unique ambiance to Android. Called simply White Night, this is a classic survival horror with a pretty intriguing story attached to it.

It’s available for download from the Google Play Store for $4.99. 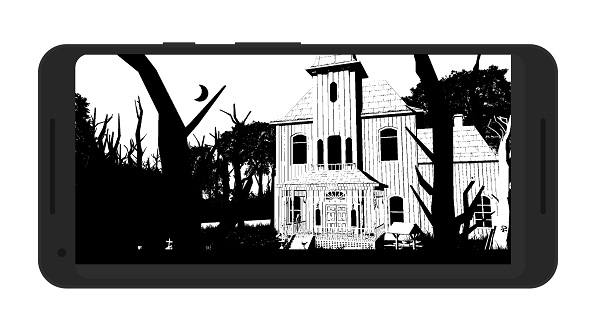 As you enter the black-and-white universe of White Night, you can’t help being drawn in by this unique monochromatic aesthetic which lays the ground for an eerie adventure.

The opening sequence which displays the credits for minutes on end reminds me of Twin Peaks. I couldn’t help but feel like Dale Cooper on his way to a God-forsaken town where something horrible had happened. The beautiful yet sinister music makes the scene even more striking.

A bit about the story

White Night is set in the 1930s during the Great Depression and the narrative is part murder mystery and part supernatural ghost story.

You step into the shoes of a nameless man who while driving on a deserted road, tries to avoid a young woman standing in the middle of the road. He crashes his car and unable to find the body of the victim, limps towards a spooky mansion to look for help. The house appears to be deserted at first, but as the main character will quickly find out that’s not exactly the case. 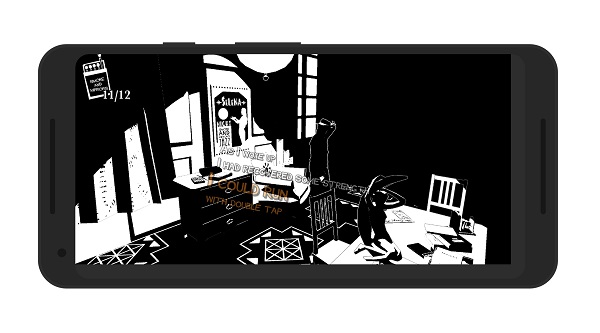 You’ll soon start exploring the darkness that is engulfing you, and stumble upon locked doors with mysterious seals engraved on them, pieces of a journal and lots of memories. The story is indeed a treat for those who love to solve enigmas. Who lived here? Why is this house abandoned? Did something bad happen here? All these are questions you need to answer.

Osome Studios, the developer behind the game did a spectacular job at creating a unique atmosphere just by using simple yet contrasting black and white graphics. Yet they didn’t pay the same attention to gameplay.

First and foremost, the controls and camera angles are really frustrating. Playing a point and click adventure on a mobile device was never a rewarding experience for me and the same goes for White Night.

Movement in the game was a real pain. I often found my taps on the screen did not correlate with the hero’s moves. This was in part, due to the fact that it’s quite difficult to make out the obstacles blocking your path since most have to explore in the near-absence of light. But the controls themselves brought plenty of painful moments to the experience.

Once you’re inside the mansion, you can start collecting matchsticks, which are your only sources of light for most of the game. Yikes! But they burn out pretty quickly, so you’ll always have to keep an eye out for more. Because you don’t want to be caught in the dark for too long.

Darkness is the villain of this game

White Night isn’t the kind of game which has monsters jumping at you from behind. Instead, it uses darkness itself as the main villain. Fail to light a match quickly enough and you’ll be dead in an instant. Then you’ll start back from the last saving point.

The game’s fixed camera angles are another issue. While they do offer a cinematic Hitchcock-like experience, they don’t allow you to get a great sense of your surroundings and make some stuff hard to view or access. Basically, most of the time you can’t really see what you’re doing. Which is quite annoying in a game where you’re supposed to find and click on things to solve puzzles. 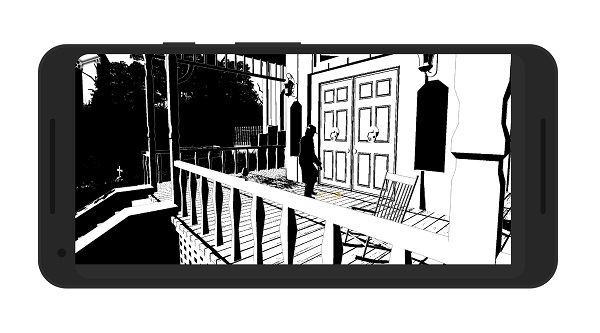 On the bright side, the ghostly apparitions in the game are very well executed. They are fuzzy, flickering creatures that seem to be in a state of agony that will bring chills up your spine.

Our character can catch a glimpse of them through the darkness, and man do they look frightening. Even on a mobile phone!

The puzzles in the game aren’t super complicated. And when you find yourself stuck, you can always turn for hints in the in-game newspaper, which is actually more of a journal. This has spared me a few times from roaming aimlessly throughout the house.

White Night excels at being an atmospheric mystery/horror game. It’s built on a good story, which at a time could have been a bit more original, but that’s just an idea. I’m deep in the horror genre, so perhaps I am a bit too familiar with its motifs and themes.

Sure, it’s not perfect and there’s a lot of room for improvement starting with the controls. The use of fixed camera angles could also be adapted to provide a more fluid exploration experience. But in my eyes, the black and white graphics, as well as the excellent soundtrack and voice acting redeem this game. I have to say: if you love horror games you shouldn’t miss White Night.

Keeping it simple: 100 HD Wallpapers of black and white photography