You may have played a mobile word search game or two, and they may have had their share of unique color schemes, game modes, and such. But I would like to take you through a truly new style of word search game: Word Teaser. From the developer GAMEDU, who also offers up to 20 other mobile games in all varieties, Word Teaser take the traditional word search, and adds several levels of variety that makes it a pretty fun game that offers a surprising amount of replay value.

Getting started is easy; just download from  or the Play Store (or iTunes if you have an iOS device). Once done, you can sign in to Google Play Games if you so choose (though you don’t have to). 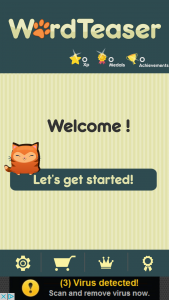 Once in the game, you go through a tutorial to guide you through the game’s rules:

Playing the game took a bit getting used to in the beginning, particularly using the color-coded hint system explained above. But with just a few minutes of repetition I had a good handle on it and found myself replaying for a good long while.

The game overall is for adults down to school-aged children. You start out looking for just three-letter words, and it takes a while to graduate to even 5-letter words. But please don’t take that to mean the game is easy: even once in the four-letter puzzles, I found myself scrambling to complete them before my time ran out. 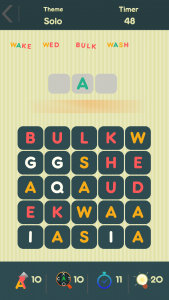 Controls are smooth, perhaps a bit too much. Particularly on my phone, I found my finger going one letter too many and my word being rejected because of the added letter; causing several re-tries.

Graphics are a nice set of muted earth-tones, making the screen easy to look at for extended periods (this is an underused feature in games: more developers should spend less time trying to make their games stand out with bright color and more with good gameplay).

Music was rather bland; it sounds a bit elementary. But again it’s unobtrusive so it’s in no way a deal-breaker (and you can 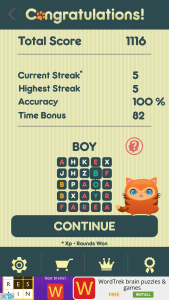 turn both the music and sound effects on & off, so there’s that).

There are several modes you can choose right from the beginning, without having to unlock them first:

I was genuinely surprised by the quality and replay value of Word Teaser. Puzzle games generally lost their appeal for me a while ago; so when I was asked to review this game, I didn’t expect a whole lot of fun from the exercise. Imagine my surprise when I found myself still playing this game almost an hour after downloading and opening it!
That really is the core of this review itself: give this game a try…..chances are you will find yourself still there playing it a whole lot later than you anticipated.
And it’s a game your school-age children would enjoy, as well, so it’s a win-win for family devices, to boot.