Yevo’s app – companion to the newly released Yevo 1 truly wireless earbuds – is a bit of a conundrum. It’s a simple app, with singular purpose, that’s plagued by over-design and needly complexity.

As mentioned above, there are a whoppin’ seven pages of settings to sift through in the Yevo app. They are as follows;

While all of this is neat, and it’s nice to be able to tweak the settings of the earphones, the companion app simply doesn’t offer any truly must-have functionality. That said, though, it’s a pretty cool feeling to be able to make a headset truly yours – especially one as tiny as a pair of earbuds.

Available for free on the Google Play Store, the Yevo companion app is currently sitting at a rather disappointing 1.8 rating, albeit with only 8 reviews. A few of those users have complained about missing or useless functionality, and one even complained that the app made his left earpiece stop working.

For what it’s worth, both my headset and the app have worked perfectly for me – despite the design issues above. 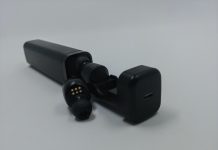 YEVO 1 truly wireless earbuds – the best you can buy, but at a steep price