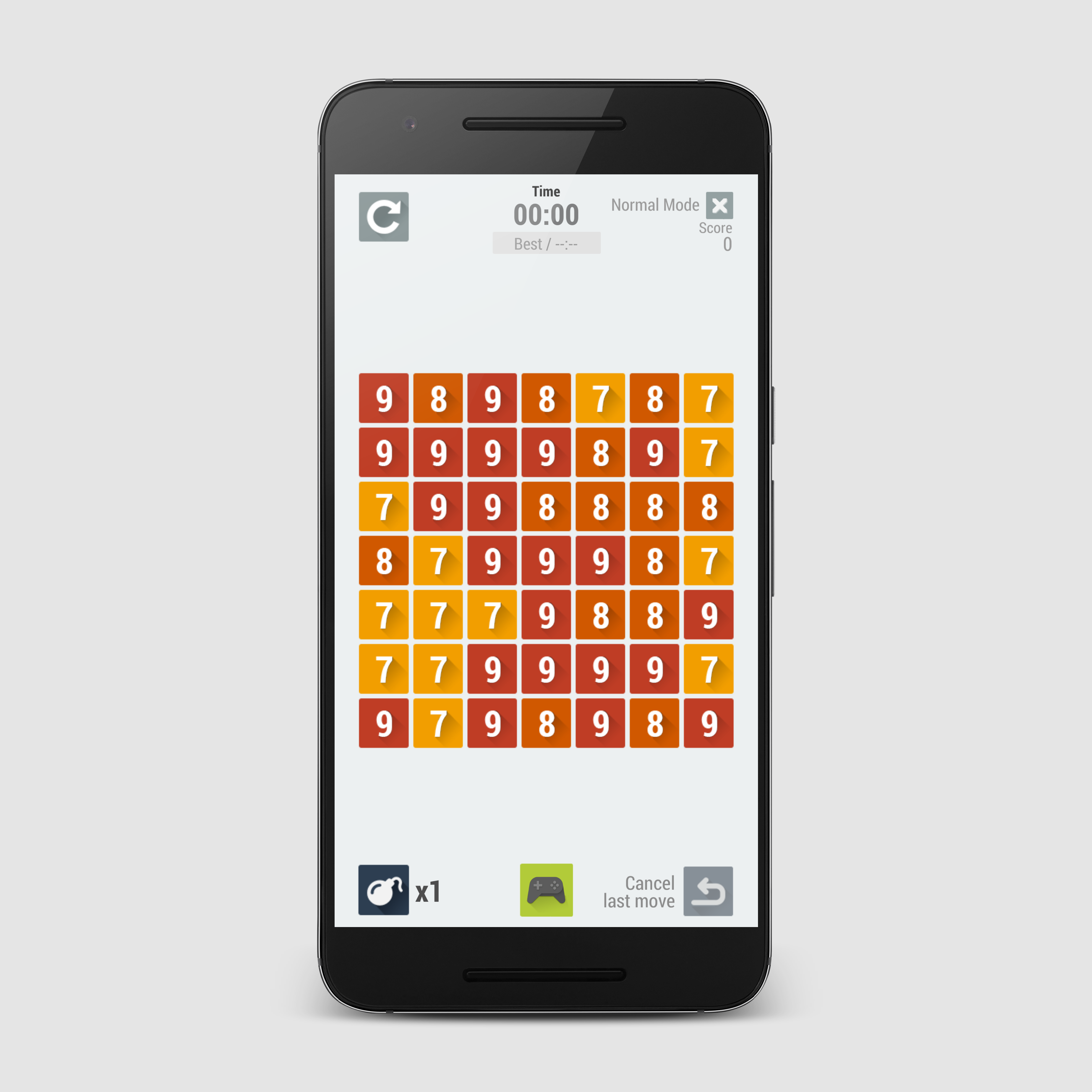 There’s something addicting about number puzzle games. As always, the Google Play Store has an astounding amount of games under this category, but the most recognizable names in this genre are undoubtedly 2048 and Threes. Ignited by the success of these games, developer ChaosVision presents Zer0, which follows a similar approach gameplay-wise, but introduces some twists to differentiate itself from its competitors.

When launching the app, Zer0 will show you a quick tutorial. Since the game’s mechanics are not complicated, the tutorial is only two screens long. After this, the game will show you the typical Google Play Games screen asking for permissions. Accept them and, in a peculiar choice by the developer, you’ll be shown the playing board directly. No main screen, no title screen, nothing. Just tap the board and the game will start immediately. Imagine launching Mario Kart and being taken directly to the course. It’s definitely not usual, but it works pretty well for this kind of game.

The game is really simple to understand. You are shown a board with a lot of blocks with numbers on them. At the beginning, these will all be sevens, eights and nines. Quoting the tutorial, “when two tiles or more with the same number are adjacent, you can click on one of them and they will merge.” The resulting block will have its number reduced by one.

For example, let’s say you have three adjacent tiles with a number eight in them. Tap on any of the blocks, and they will be reduced to only one with a number seven on it. The objective is to combine blocks until you get one with a number zero. Believe, getting a zero is harder than it sounds.

However, this is not a bad thing at all. There’s something super addictive in combining all of these numbers until you get the number zero. Since the board is pretty big (7×7), there are multiple strategies you can use to achieve your goal. Another bonus: each time you combine tiles, new tiles fall from the top, making it impossible (or at least very difficult) to fail the game.

When you finally get to the number zero, the game gives you an option to continue playing normally or try a mode called Hardcore Mode. This mode asks you to combine two zeros, which will curiously from a 2048 block. It becomes trickier because blocks change color with every move you make. However, identical numbers will still display identical colors.

If you continue playing, you’ll get to Hell mode. In order to clear it, two 2048 blocks must be combined, forming a 42 (yeah, really peculiar). This mode is as difficult as it sounds, augmented by the fact that blocks with the same number no longer have identical colors. There’s even a special mode called God Mode, which you can access when clearing Hell mode, where you have to merge two 42 blocks, but every block in the board turns into a question mark. God Mode is so hard that only four people have passed it, according to the developer.

If you find yourself stuck because you have a block that you won’t be able to combine in the foreseeable future, the game gives you an element called the Joker Bomb. This item will destroy a single block on the board. It may not sound like much, but it can be extremely helpful when you are close to finishing the game, but aren’t able to combine two low-number blocks because you have a pesky high-number block between them.

Also, if you make a move and then regret the consequences of your actions, you can tap a button to undo your last move. This will show you a short video ad, and when it’s done, your last move will completely banish, letting you do things in a different way. I wish that was something you could do in real life.

The game also lets you compare your best times with people around the world, thanks to its tight Google Play Games integration. Since I’m pretty bad at this game, a trip to the leaderboards just left me depressed and questioning the decisions I’ve made in my life. I can’t understand how people got a number zero in two minutes.

Anyways, continuing with Google Play Games, there’s also 13 achievements you can get, which can get somewhat difficult. If you are an “I don’t care about leaderboards” kind of people, you can also share your progress locally by using the share button at the bottom. This will automatically make a screenshot of the app so you can share it wherever you like. Pretty cool.

Developers normally don’t focus on graphics for this kind of games but instead, opt to direct their attention to refining the core gameplay. However, ChaosVision has done an amazing job in creating beautiful graphics that don’t distract you from your main objective. Tiles have different colors depending on their number, and they have a cool shadow that extends from their digit. When combining blocks, the new ones fall in a very subtle manner, and animations for existing blocks falling into position are simple but fluid. Also, the animation when cancelling your last move is a joy to watch.

Zer0 manages to bring users deep, addictive gameplay with mechanics that you will be able to understand in five seconds. Combined with no in-app purchases, a completely optional video ad, and elegant graphics, it’s very easy to recommend this game, and it definitely should get more attention. If you love challenging, but fun puzzle games with a math aspect, download Zer0 right now. You won’t regret it at all.