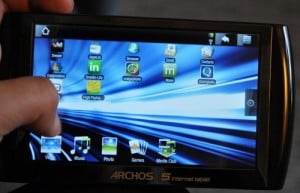 Let me first say that I have always been an early adopter.Â  From my first Tandy Color Computer II to one of my latest automobile purchases, the great Mazda RX-8, I am on the hunt for the next big thing and the products that are just a little bit off but deliver big rewards to those who have patience.

This is what brought me to my latest acquisition of the Archos 5 Internet Table 16GB.Â  Anyone who is reading this is probably aware of this new device and after living it for the past week, I have seen witnessed the Jekyll and Hyde personalities of this little import.

But when all is said and done this little gizmo is much like my beloved RX-8: quirky, needed TLC and understanding (even when the engine would stall in my driveway after not being properly warmed before moving), and not always the fastest thing around.Â  Yet the Archos 5 IT is on the Android forefront and with the updates and upgrades coming I am confident that the Android iterations of the Archos tablets and media players could be their best yet.