Auralux offers a slight deviation from the standard RTS fare.  The background music is out of this world, and it differs depending on the way you play the game.  Aside from the dazzling light show, Auralux can set up monumental battles that can last for hours. 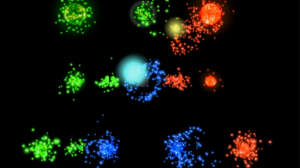 You can compare Auralux most directly with another RTS mobile hit, Eufloria.  The gameplay centers around small balls of light (red, green, blue, and purple) trying to capture bigger planet-like balls while defending against other light- and music-filled enemies.  Offense and defense are continuous, similar to Eufloria, and you can upgrade the planet-sized spheres to help produce more warrior-balls.

As you begin, the tutorial level is fairly simple and gets you acquainted with the mechanics.  However, Auralux ramps up the difficulty and tactics immediately afterward.  There is no story or linear progression, and you can choose at which difficulty you would like to play right after the tutorial level.  This is surprising and almost unwelcome as the tutorial in no way prepares you for the warfare that follows.

That is not to say that the levels are not fun; you just have to think a few more steps ahead than you generally would.  Instead of your warrior-lights immediately attacking the objective that you select, they tend to dawdle melodically as they hunt out enemy balls.  This allows the enemies to mount an attack and even a counterattack against you while your entire army is attacking.  Note, sending your entire army against a single enemy is a recipe for disaster.

You must think about capturing planets and in what order you want to do it.  You must think about how many soldiers you have and are willing to throw against the enemy.  For example, capturing an objective in the middle of the map can and will lend itself to massive attacks by both of your enemies.  Sending your fleet from one planet to an enemy’s allows the enemy to gather a ton of resources while your light-balls are making their way, musically, toward the enemy base.

[pullquote1 quotes=”true” align=”center” textColor=”#000000″]The melody they create cuts deep into your psyche as the notes are your soldiers’ lights being extinguished.[/pullquote1]

All these elements lead to a war zone that is reminiscent of trench warfare in WWI.  Someone has to win, but it is costly, overly dangerous, mentally taxing, and you are probably not going to conquer anything for very long.  That being said, you can win; you just have to think ahead and have enough patience to gather your forces.

The music and sounds of Auralux are dynamic and soothing.  Each interaction of the balls of light causes a musical note, and when you have dozens of balls battling, the melody they create cuts deep into your psyche as the notes are your soldiers’ lights being extinguished.  You must play Auralux with headphones to get a sense of every tiny light-ball’s signature melody.

Auralux offers a few options to deepen and, honestly, make the game better.  You can purchase extra levels (there are only eight to begin with) and a speed mode to give the game a boost.  I would suggest getting the speed mode as you can turn it on and off within the game, and it can make the game much more interesting.  Luckily, you can also pause and resume your game in progress, making Auralux a great mobile game.  Auralux also offers achievements, although they are not Google Play Achievements.