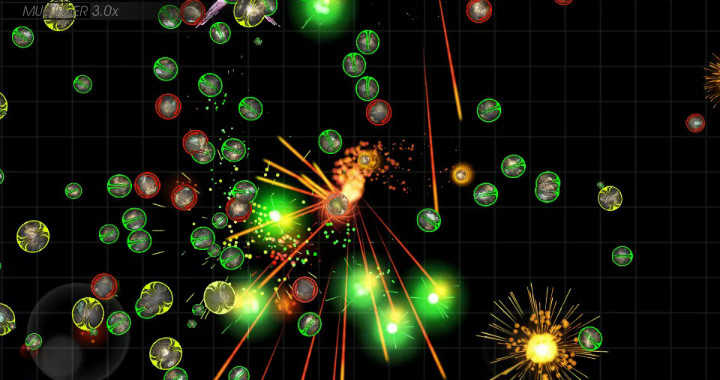 Ballistic SE brings a smooth, welcome addition to the much-hyped, but ultimately lacking, catalog of twin-stick shooters on Android.  With the proper setup, Ballistic SE will have you frantically whizzing around your phone’s screen dodging a fireworks display’s worth of missiles and bullets. 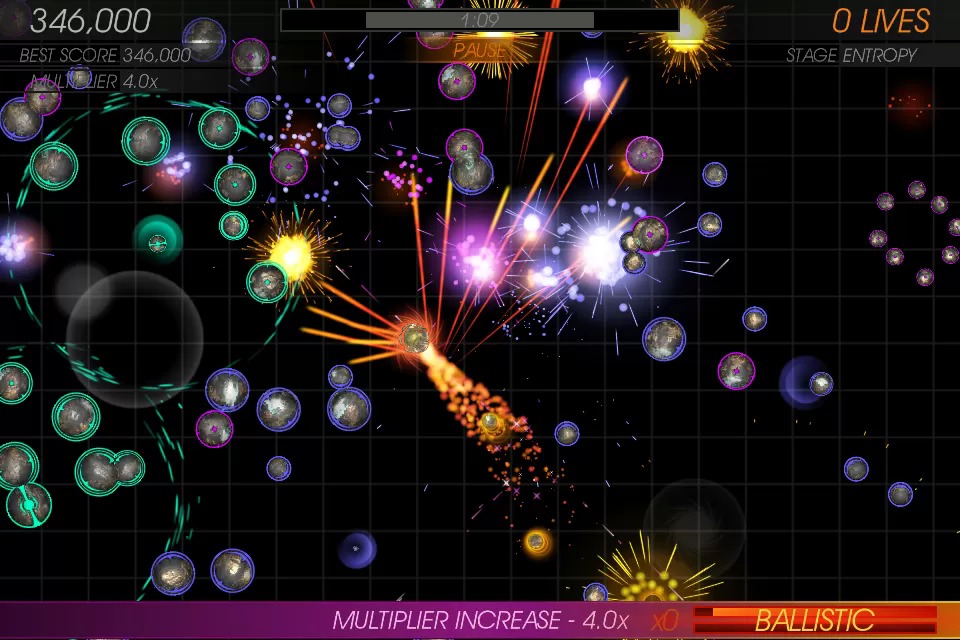 The fast-paced action and wave level structure of dual-stick shooters lends itself well to the mobile platform, and Ballistic SE wraps these together in an easily consumable and aesthetically pleasing package.  Whether you want wave after wave, a little practice, or a few quick challenges, Ballistic SE has all this covered plus the inherent replayability of these types of games.

Starting the main game of wave after wave of enemies, you control a disc-shaped ship that shoots singular bullets.  After accomplishing a few goals, you can upgrade your ships bullets, its speed, and even drop mines as you move.  These upgrades can give you a big advantage, and you will want to take the chance to make your ship faster as the enemies relentlessly pursue you in the later waves.

The enemies are a myriad of colors and sizes, though they are all disc-shaped.  The different colors denote what attacks an enemy has in its arsenal.  For instance, a turquoise enemy will doggedly track you while purple enemies are more numerous but remain semi-stationary.  To combat these enemies, you can upgrade your ship as mentioned or use the ballistic mode which slows down time so that you can gather your bearings or find the bombs littered throughout the stage to explode any enemies within the bomb’s blast radius.

Aside from the bombs, there are point multipliers that pop up on the map during that level that you can move your ship over to get the bonus.  These features make Ballistic SE exceptional as not only do you have to avoid enemies during the wave, you can also nab bonuses to ramp up your score.  Unfortunately, there are no online scores to match yourself against other, and Google’s Game service would be a welcome addition here, but Ballistic SE does have achievements that you can aim for.

[pullquote1 align=”center” variation=”black” textColor=”#000000″]With the proper setup, Ballistic SE will have you frantically whizzing around your phone’s screen dodging a fireworks display’s worth of missiles and bullets.[/pullquote1]

The game screen shows you tons of information while playing without being intrusive.  You can see your score, how many lives you have, the wave number, when your next 1UP is, your multiplier, and how many more enemies you need to defeat to get to the next level.

If you are used to playing Super Stardust or something similar, you will absolutely want to change the control settings.  I found the ship move far too slow, and I changed my sensitivity settings to very high.  This improved my playing exponentially and felt much closer to a physical controller’s sensitivity.  I would also like to see the challenge levels be more creative instead of only pitting you against certain enemy types.

Ballistic SE is a standout dual-stick shooter for Android.   While Ballistic SE does not have varying weapons or completely different enemy types, the enemies do vary their tactics and there are multiple tactics you can use to destroy them.  The mobility, dazzling lights, and upgrades keep the game interesting even after you have beaten a high number of waves.