Have your ever imagined what would happen if toys came alive? Well, this is not Toy Story. How about raging toys with heated battles, beating the plastic parts off each other? Sounds cool, doesn’t it? Battle of Toys is exactly what you need.

A 3D turn based battle game which will take you on adventure filled trip to the world of toys. Starting off with one toy, players can build up their collection buying from a wide selection of killer toys with a huge selection of upgrades and costumes to improve the attack power. The controls are very simple and require reflex based actions to execute them successfully.

Players enter into a 30 second battle and are required to stop the indicator in one of the green zones to trigger an attack. There are three indicator styles that appear randomly in battle. It also contains several interactive mini-games, that pop-up to help maximize the damage of a combo after triggering an attack.

Since there is no defensive ability in the game, players have the option to switch characters mid-battle allowing a team of up to 6 toys, which can be strategically used to win the battle. 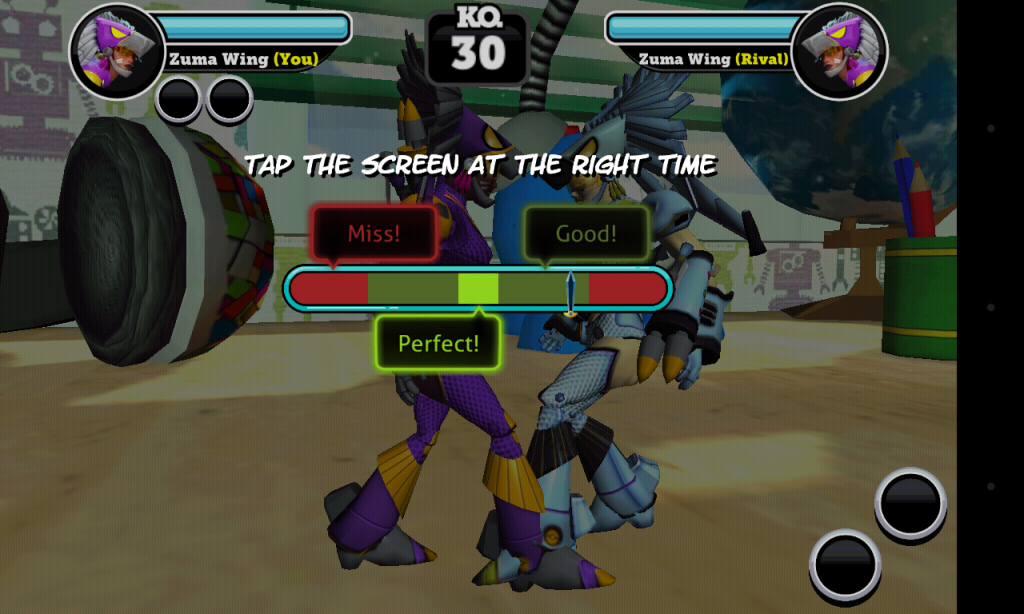 Each battle earns the player some coins and sometimes, the more desired, diamonds. Different battle locations keep up the spice of the game. Difficulty level of the game can be adjusted to gain greater coin rewards, but there is no indicator telling how the current toy will fare in the battle. Upgrades and special combos are a must as players progress through the story.

New toys can be purchased using the coins earned in the battles, but the best toys can be purchased by using a large number of diamonds only (bought using in-app purchases) which seems a bit pushy. Even though there is a leaderboard, there is no multiplayer option to play with friends or have a random online battle. Although, it lacks a definitive storyline, the game is still fun to play. Battle of Toys is simply a fast paced fighting game without the complexities of similar titles like Injustice or Mortal Kombat, which contain elaborate upgrades and exhaustive gameplay. Nevertheless, its a good way to kill time and beat some toys in the process.

Did you check out Battle of Toys? Tell us what you thought in the comments!