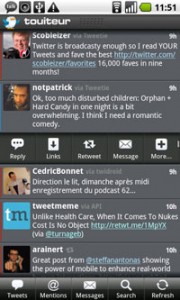 Three days ago I began a series of reviews on the four most compelling Twitter clients in the Android Market. Seesmic, which some used to consider as being the best Twitter application available on Android, has seemingly fallen behind offerings by Twitter, Inc. and developers Zimmermann & Marban. Twitter, Inc.’s recently released Twitter application delivers on many levels, but clearly plays second fiddle to Zimmermann & Marban’s Twidroid and LevelUp Studio’s Touiteur, which is the best Twitter client on Android.

Touiteur was released this past fall by LevelUp Studio, the developers behind the popular applications Beautiful Widgets and Beautiful Live Weather. Like many applications, Touiteur comes in two flavors: a free and paid version. The paid version grants you access to one of the cleanest looking and most functional widgets available on Android.

Touiteur’s interface is elegant and aesthetically appealing. The colors are palette of colors includes black, a bluish-gray, and light blue to distinguish the user’s own tweets. The bottom bar has ‘Tweets’, ‘Mentions’, ‘Messages’, ‘More’ and ‘Refresh’. Pressing ‘More’ brings up a nicely-animated window with additional options. These options include ‘New Tweet’, ‘Search’, ‘List’, ‘Trends’, ‘Favorites’ and ‘Switch View’, which is useful if you have multiple accounts.

Touiteur is the crème de la crème of Twitter applications because of the wealth of features it offers to users, and the manner in which the aforementioned features are presented to the user. Like most Twitter clients, you have the ability to add multiple accounts, a feature that is important for individuals who have a work account and a personal account. Touiteur users also have vast customization options available to them. You can set Touiteur to update in the background with or without notifications, you can select the update interval, and you can set Touiteur to notify you only when you are mentioned or receive a direct message. Regrettably, there is no “Manual” update interval. You also have the ability to set the number of tweets that appear in the list. You also have the ability to set the LED notification color, choose your picture hosting website, and choose the color scheme of the app itself.

One of Touiteur’s best features is the speed at which you can tweet. Within the application, you pull down a tweet bar and begin typing. From the pull-down bar you can attach a photo, share a link and send a tweet. It is that simple.

Touiteur’s coup de grâce is threaded conversations. It can be difficult to remember what someone’s tweet was in response to. Clicking on a tweet results in the opening of a minimalist drop-down menu below the tweet. This menu prevents you with a bevy of options: you can reply, select a link, retweet the original message, send a direct message or add the tweet as a favorite. Below the drop-down menu are the three most recent tweets in the conversation, followed by an option to view the conversation in its entirety.

Touiteur shares many features with other Twitter clients, however the application distinguishes itself in many key ways. Its styling, widgets and threaded conversations make Touiteur the best Twitter client on Android. Touiteur Premium costs approximately $2.49 (€1.99), and can run on all versions of Android.