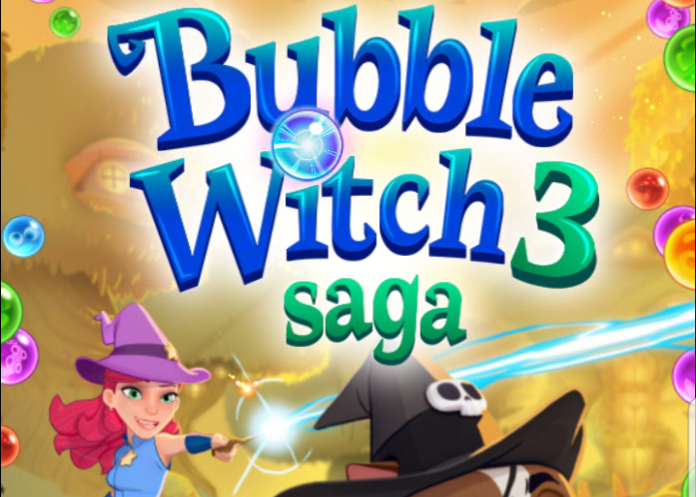 King made a name for itself in a big way a few years back when it launched it’s first hit game Candy Crush Saga. There have been a plethora of games since then from King involving witches, pets, farms, soda, but all revolve around this idea of having short levels with some sort of match 3 gameplay with tricks and turns, and every time you fail to pass a level you lose a life. Lose 5 and you’ll be sending annoying Facebook requests to all your friends hoping to receive a few to continue your Saga. One of King’s newest games is Bubble Witch 3 Saga (that’s not a typo, and yes it is a little awkward to say) but does the tried and true method of King’s previous hit games still hold up?

Welcome to the World of Magic

In Bubble Witch 3 Saga you play as a witch in pursuit of a trouble making magic cat. You launch differently colored bubbles from your magical portal up to the top of the screen. Any match of 3 of the same color will cause the matched bubbles and any adjoining bubbles of the same color to exploded. The goal of each level varies a little, with missions to either clear all the bubbles, release owls that are trapped in bubbled by popping them out, helping a ghost travel up through a maze of bubbles by popping the way, and even boss battles where you need to release fairies (again, by popping bubbles) to attack bosses.

Seeing that this is a King game, the controls are not overly complex at all. You hold your finger on the screen to aim your bubble and release to launch it. There is a beam that shows your trajectory, so aiming is dead simple. King keeps controls simple so that their games are easily accessible by all kinds of players. When you make a game that I’ve seen 7-year-olds play, and that their Moms can also pick up and play, you’ve got a recipe for success.

BW3S is colorful and cartoony. Everything is bright and crisp and the animations flow very smoothly. The sound matches the art style, with cheery pops, fun music, and whimsical sound effects. The various environments look and sound like they are ripped right out of a Disney movie and it makes the game feel fun and inviting.

There are several basic styles of levels as I mentioned earlier. Popping all the bubbles is probably the most straightforward of all the level types. My favorite levels are the levels that involve getting the ghost all the way up the tower of bubbles to be reunited with his friends. These levels are typically filled with bubbles and different routes you can pop, but there are some amazing combos you can pull off and you get a tremendous sense of accomplishment when the entire screen explodes and your ghost zooms up in the air. All these different gameplay styles help to keep the game feeling fresh and new level after level even though at its core it’s still the same one-touch gameplay.

As with most of the Saga games, there are countless levels. They start incredibly simple and brainless and get more complex as the levels go on. There are a handful of powerups that help you demolish bubbles quickly and easily. Some of these are gifted to you when you beat boss battles or at special checkpoint levels, but to get more otherwise, that would be an in-app purchase. Each of the stars you collect for completing the levels gives you money to improve a little cottage. There’s really not much to this besides bragging rights.

I would like to have seen your abilities maybe tied to which garden you planted or which trees you chose, but really this is nothing more than a cosmetic cottage where your goal is to make it look pretty. If that’s your kind of thing, then maybe that part of the game will keep you interested for longer. I tended to forget about it until I had enough to do about 3 upgrades at once, just because I didn’t remember it since there is no sort of reward tied it with. All in all, there are enough levels, powerups, and cottage building (if that’s what you’re into) to keep you busy for weeks and weeks.

Bubble Witch 3 Saga is a pretty fun game. The simple gameplay makes it easy to pick up and play for just about anyone, but don’t let that fool you. The levels can get pretty complicated and you’ll find yourself burning through lives until you finally pull off that perfect run. There is enough variety in the levels that things do not get stale quickly, and the cottage mode gives you reasons to get 3 stars since they give your currency to unlock more cottage upgrades, even if it is just for purely cosmetic reasons. King doesn’t stray to far from it’s tried-and-true formula, but with a game that is this beautiful, engaging, and fun, maybe they don’t need to just yet. BW3S is a great game to pick up if you’re looking to pass some time, or if you need a new addiction. That said, they can only rehash the same game a few times before people need something new. Bubble Witch is still fun, but this might be the last romp before they need to have a serious shakeup.