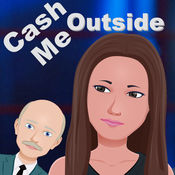 How “bow” a game based on a ridiculous and somewhat annoying meme? If you’re not sold on the idea, I don’t blame you. Gold Coast Apps has decided to “cash” in on the popularity of the popular “Cash me outside” quote from the girl that built her appearance on Dr. Phil into a mini-empire. Gold Coast is not afraid to quickly hop on other popular memes and pop culture references and build them into basic games. Previous entries also include ‘Damn Daniel’ and ‘Trump on the Run’.

Cashing in on simple gameplay

So how does Cash me outside play? Simple and straight forward–then paired with ridiculous sound effects from the overplayed meme. The premise is so basic it immediately brings feelings of Flappy Bird paired with Temple Run. You play as the unruly ‘Cash me outside’ girl, or some semblance of, within an ever-evolving quasi 2D/3D, blocky world.

Upon starting the game you’ll have instant access to the first level. The blocks appear in front of your character as she continually moves forward. Simply press the screen anywhere to cause her to jump between the gaps and land safely on the next floating platform. Miss a platform and poor little Danielle will fall to her unfortunate death. The game’s difficulty is high, and will cause most players to restart from the beginning over and over, in similar fashion to the infamous Flappy Bird.

As you move along in the game, Danielle will collect the cash that’s littered about the platforms. Collect enough cash, and you’ll be able to unlock new and uninspiring levels. The main, interesting point to the entire ‘Cash me outside’ game is that the levels occasionally and dynamically shift before you eyes, which is intriguing to watch, but also adds to the difficulty of the game.

Looks and sounds can be deceiving, but not here

Graphically, Cash me outside leaves a lot to be desired. We all know that great graphics don’t necessarily equate to a great game, but in this instance poor graphics are paired quite nicely with poor gameplay. Danielle herself is cartoony and looks as if she was drawn by a fifth-grader, and although the levels shift from time to time, the actual platforms are basic and blocky. It’s safe to assume this game is not licensed and I imagine that a license wouldn’t help in this instance.

Each time your character falls, you’ll hear the perfectly recreated “cash me outside” phrase from the Dr. Phil show that so many of us now know. Also after each failure, you will have about a 25% chance of being presented with a full-screen ad that will need to be dismissed in order to continue gameplay. Not surprisingly the entire experience feels like a quick cash-grab and will most likely be dismissed and forgotten by most players.

Cash me outside is ridiculous on so many levels. Is it funny and entertaining? Well maybe for some, but probably not for long for most players. I laughed the first time I tried the game, then quickly became annoyed by the repeating sound effects and repeating advertisements. This game, as it may be referred, is really what’s wrong with mobile entertainment in a multitude of ways.

Simple, repetitive gameplay. Generic sound effects coupled with basic graphics would be given a pass if there was a little more to the game, but here they complement the poor gameplay perfectly–but not positively. It’s hard to recommend this game to anyone that doesn’t want just a quick laugh before this meme is all but forgotten within the upcoming weeks.