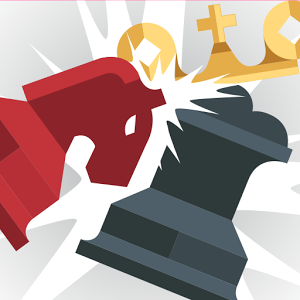 Chezz(Not the Musician) is the second game to be released by QuickByte Games, along with Blasty Bubs. Their games often focus on short, quickfire sessions that allow you to actually make tangible progress while, say, waiting for a taxi. Download links are available on their site.

Anyways, Chezz is chess. The twist is that there is no turn system – instead, you move a piece, and then a cooldown is applied to that piece before you can move it again. This twist allows you to, for example, get an entire group of units before the first one has even reached its destination.

As far as tutorials go, the one included within adventure mode is fairly clear. It walks you through how each particular piece works, and then goes into how you win. Its nothing new; A knight can move in a L shape, A bishop can move as far as they want diagonally, Rooks can move as far as the want in a straight line, and a Queen can use the same movements of a rook and a bishop – whereas kings can only move one in each direction. Most games require capturing the the king to win*. Pawns, as you may be aware, are odd little things. The first move for a pawn can be 1 or 2 spaces forward, then all other movements are 1 space forward. However, they can only take opponents in a forward diagonal.

After a few rounds, the game will start adding various game modes and modifiers. For example, you may have a best of 3 match, rather than a single round. You can also get rounds where, rather than trying to take the king, you protect your own.

Win or lose, you gain XP, which levels you up. When you level up, You can use the upgrades menu to increase the speed of moving, as well as improve cooldown, for all units except the king. The pawn shop allows you to buy skins, which effect all your pieces (for example, I’m using the Scouts skin) and crowns, which change the headgear your king wears. Pawns are also used to enter online, more on that below.

How does it look?

Actually, it looks pretty good. The flat design has given way to a good looking UI, and is easy to understand. But, more importantly….

In the main menu, alongside ‘adventure’ and ‘training’ (which can be oh-so useful!) Is ‘online.’ For eight pawns (earned by adventure wins, or adverts) you can challenge similar skilled players, and you can also play training and adventure while you wait for an opponent. The winner walks away with the 10 pawns. From the multitude of matches I played, you’ll only see the default game mode of Capture The King, 1 round.

These are some of the cheapest IAP’s I’ve seen in recent history(Looking at you, Dragonstone.) You can buy pawns, the in-game currency, for:

– Watch an advert for 8 pawns

What’s more, you don’t feel cheated on by not buying them. If you get quite good, pawns are not that difficult to earn.

However, there’s an issue here.

Alright. While my phone was unable to run Chezz (my bad! I fixed it eventually) I asked a few friends about the game. Turns out they’ve played it too, and although they like the change of pace and the looks, they all agreed on one thing: It gets boring fairly quickly. One of them said, and I’ll quote, “If it’s a game you’ll play a few matches a week of, you’ll be fine. Much more than that, and you’ll lose the game’s value.”

I can agree with them here. Although the game has a good premise, a good way to drain any fun out of it is play it constantly, like an MMO. This seems to be a trap for quick-fire games like this – a few matches every now and then are good, but play it too much and your experience may lower in quality.

Chezz is a well-made game that I personally will be keeping around, only to play every now and then. It’s blatant that this sort of game is where Quick excels, even if the type of game they built isn’t the most popular.

Inspired by The Queen’s Gambit? Check out these chess training courses