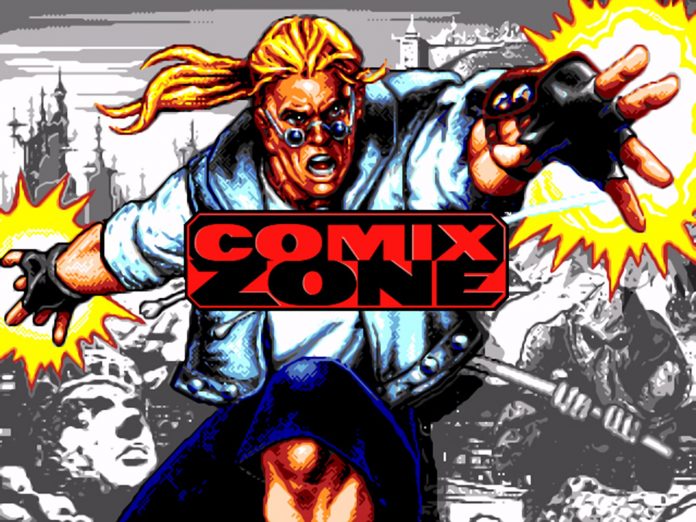 Ah, Sega. No introduction necessary for them, I hope!

Comix Zone was originally made for the Sega Genesis back in 1995 and has since been released on Steam, Wii, PlayStation 3, Xbox 360, Game Boy Advance, as well as Android and IOS. It follows the story of Sketch Turner, who… gets trapped in his own comic book by the main villain, Mortus, in order to kill Sketch so Mortus can escape into the real world. Not the most normal of plots but it’s a plot!

In order to install Comix Zone, you will need approximately 100MB of storage, as well as granting it the storage and… Wait, location? That one is optional if you are a privacy fan like myself. 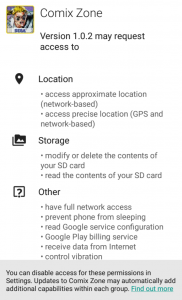 Older games had a habit of including tutorials in the manual, rather than in game. as such, here are the controls: 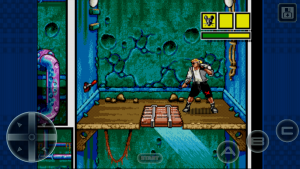 D-pad: the four directions let you move, the diagonals put you into stances for high/low kicks and punches.

A button – You’ll be using this one a lot, as it is used for attacking people and things. Also used for using items that you have selected (see C button)

B button – You jump. Me and jumping in games never mix.

C Button – use this to scroll through the 3 items boxes in the top. When you do, you can press A to use the highlighted button. To pick said items up, just crouch on them (D-Pad down) Keep in mind you do get some items at the start, so grab ’em and go!

Oh, and there is a save button on the top corner. Unless you pay for local saves, your saves are stored on the cloud via Google Play Games. Mind the AD on that menu if you do not have ad-free.

Exactly as you would expect from an emulated game – i.e. “results may vary.” My Older phone (A Bush Spira B3) had some struggles, while my Wileyfox swift 2 plus (Name hopefully more familiar) ran it A-OK. As far as visuals and audio go.. its an emulated game from 1991. It’s not about the how it looks and sounds as that department was really limited back then-but still pretty fitting for each other, and that’s what matters.

Oh, and it’s surprisingly cruel. Firstly, you only have one life – you die, game over. Secondly, Health from what I’ve seen is rare- I had one health item. Oh, and thirdly? Punching any blocks, barrels, etc. damages you. It’ll be a fun day where I die again because I need to get rid of a barrel to continue progressing. Ah well, it’s part of the fun!

I have an issue with the saving mechanic. Not only do you have to pay or watch an advert to save or load, but you have to sign into Google Play Games Every. Single. Time. You can pay £1.99 to have Non-Sega adverts removed, although I’m not 100% sure if this affects saving. There was a way to buy local saves, but it seems to have disintegrated after I said no to it after the first launch. Not great.

While I can’t say much that hasn’t already been said, Comix Zone is a fun, albeit frustrating to some people. It’s good to see older games get a new lease of life through emulators, and CZ is not an exception to this. The use of adverts is annoying, however, and the saving system makes free users both be online and put up with adverts.