If you’re reading this and are old enough to remember the SEGA Dreamcast, you likely remember the game Crazy Taxi. The game came onto the arcade scene in the late 90’s, and jumped onto the Dreamcast platform shortly thereafter. The game then spread to other platforms over time, including several Playstation generations, Xbox, and Windows PCs.

Well now SEGA has brought back this classic game, and brought it to Android, with the 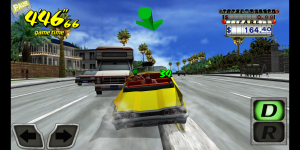 For those who’ve never played, Crazy Taxi is a generally open-world driving game. You play a taxi driver, and you’re given a limited amount of time to find, pick up, and deliver as many riders as possible. Also, the faster you deliver each rider to their destination, the more fare you make. Your total fare is your score for your game.

This is a game that allows for a fair (or more than fair) amount of bragging rights to be put on the line. It’s a great game to play with friends; taking turns to see who can be the “king of the cab”.

Setup is almost nill. Simply download the game from the Play Store. Once downloaded, just open and off you go.

Upon opening, you are greeted with a Game Options screen, where you can select Arcade, Original, and Crazy Box (a series of skills challenges). For the Arcade and Original options, you can play by arcade rules (where you gain time a little at a time for every successful fare) or a pre-determined time limit (3, 5, or 10 minutes). After you select your game type, you can then choose your driver and car…..between 3 mailes and a female.

At this point you’re launched into the game. You find yourself in your taxi, and you are 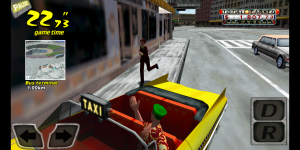 free to drive wherever you want. Of course, it makes good sense to find a customer as soon as possible. When you do see one, you pull up and stop within a glowing circle. There are several icon colors you may see over customers, ranging from red (short ride but low fare) to green (high fare potential but a long way to drive to get there in time).

Once you brake your customer will hop into your taxi, then it’s up to you to get there. The game physics are very arcade-like, allowing you to take several liberties with gravity and such, while also plowing through traffic, pedestrians, and the like at superhuman abilities. It’s impossible to crash-and-burn, but you will come to sudden stops should you slam into oncoming traffic. Get to the destination with time to spare, and you make a handsome fare. But get there late and you risk your customer simply jumping out mid-ride.

You control your taxi a couple of different ways (selectable via the settings menu). You can steer via tilting your screen or on-screen left and right buttons. You also accelerate and brake via on-screen buttons.

The graphics in Crazy Taxi will take you right back to your Dreamcast or PS2 years. That’s not a bad thing, though. The provided graphics match up will with the era this game thrived in, and we’re all in with this approach. 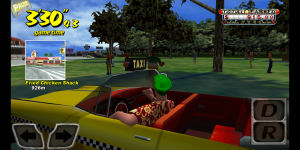 game. The music does a great job in ramping up the intensity of your gameplay, and doesn’t let up no matter how you’re doing.

The replay value of this game is very high. I found (and still find!) myself playing the game at slow moments throughout the day. It’s a game you can pick up and play for as long as you want, get your kicks on it, then shut it off without a save nor a care…..it will be waiting for you to pick up again just when you’re ready.

The main complaint in playing this game is a technical glitch I encountered often. While 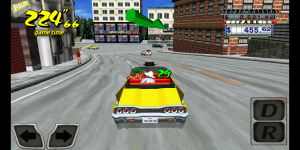 driving around, be it with a customer in tow or not, whenever I bumped up against buildings, my car would get “stuck” while trying to accelerate away. I would sit there with the accelerator pegged, but the car would only very slowly pull away. Once clear of the building, I’d be back to normal again, flying away with my hair on fire. Weird glitch, and yes, I’d experience it less if I wasn’t driving into buildings so much, but it is still there.

Crazy Taxi Classic takes what made the original game so much fun, and brings that same action to your Android device. In addition, the game allows you more options to play as long as you want. We highly recommend this family-friendly title for your enjoyment.