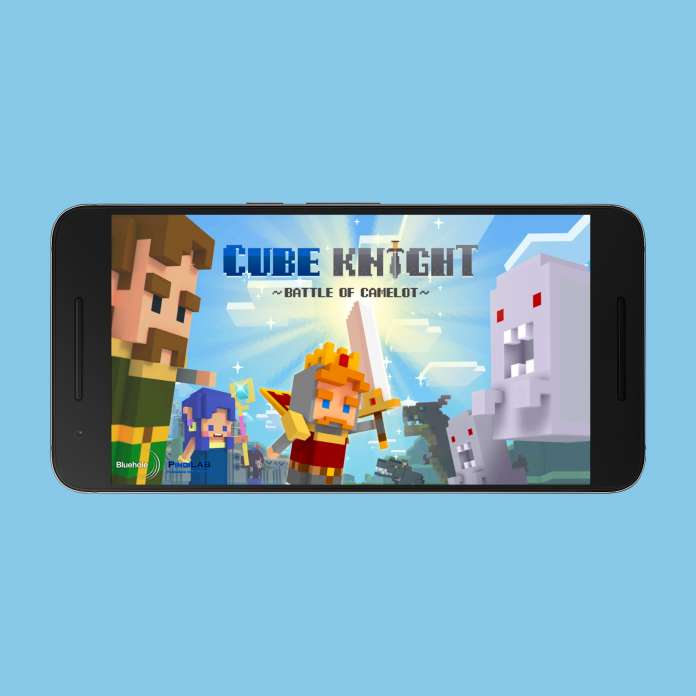 In a marketplace as big as the Play Store, it is really hard to get your app noticed. Numerous studies done throughout the years show that, unfortunately, there are a lot of apps that nobody knows about and that have never been downloaded (or have measly download numbers). This is good for the consumer since it means that developers have to innovate in order to get downloads.

However, in this app craze, it is easy to miss games that stay true to a proven formula but still manage to be of great quality. This is definitely the case of Cube Knight, by Bluehole, a game that could seem generic at first glance. However, after playing for some minutes, you will quickly realize that it packs an enjoyable and long-lasting game with several different elements that provides more depth than a big bunch of apps in the Play Store.

As usual with games these days, Cube Knight connects immediately to Google Play Games in order to sync achievement and leaderboard information. The game doesn’t request any invasive permissions, which is always a good thing. After this, the game shows a small backstory and you dive right into your first fight.

The game will overlay a view with instructions of how you can control a character. Controls are pretty straightforward. To the left, you have a virtual joystick to move a character. To the right, you actually have another joystick, kind of. It is used to attack, and you can control the direction of it by pressing on different parts of the circle. If you want to perform your charge attack, then you can hold down the stick. Finally, there’s an Auto button, which shoots and focuses for you automatically.

Now, on to the action itself. Monsters come at you in waves. In order to clear a level, you have to kill all monsters in all waves. Some levels throw a boss at you at the end, making it a bit more complicated to finish. These monsters attack you in a variety of ways, from short range to long range to attacks similar to your charge attack, so there’s always a bit of strategy involved in order to avoid being killed.

There is also a deck of cards that is shown to you after clearing a wave. These cards will let you improve different aspects of your character for the remainder of the level, such as attack power, maximum HP, barrier durability, etc. They’re a cool addition to the game and, in many levels, you have to think your choices through.

For example, if your HP is full, then you may want to increase attack power instead, but if you are at the beginning of a stage and your barrier HP is low, then improving your barrier would be wiser to prepare for the boss fight ahead.

After finishing any level, you are thrown to the top of a castle or something similar. This is the home of two shops, one for buying weapons and the other to buy defensive items. As you progress in the game, you will unlock new slots in order to construct new buildings.

These additions will have different effects on your gameplay, such as increasing the amount of coins you get at the end of a level, kingdom points, etc. When you upgrade buildings, their effects will also increase. In the case of shops, they will sell items of a higher level.

Speaking of coins, they’re the main currency of this game (as with so many games). You get them by clearing a level, by picking them after being dropped by monsters in the battlefield, or you can buy them with real money (through gems). With coins, you can buy new armor for your character.

The other type of currency in the game is gems. These are harder to get, but are very useful because they allow you to buy new characters, stronger weapons, more energy, and coins. This is the way the game gently asks you to spend stuff on it, but you can definitely progress without the need of gems, if that concerns you.

There are eight characters available in the game; four are possible to get with coins and the other four through gems only. The game lets you test the characters in a real-world simulation in order for you to decide if your hard-earned coins/gems are worth it. These characters offer a variety of attacks, from short to long range, blades to arrows, and one hit to multi-hit.

Also, charge attacks are different for each character, making them even more varied. There’s something for everyone here, and, when you get a new character, it almost feels like a completely new game.

There’s a energy bar that depletes when you play on a stage. If you empty this bar, you won’t be able to play until it replenishes by itself after a few hours, or you can pay with gems for the privilege of having it refilled immediately.

Also, there’s something you collect at the end of each level which is called Kingdom Points. This is how your “kingdom” levels up, which means that you will unlock new levels of buildings. There’s no other way of collecting Kingdom Points than fighting.

The difficulty of the game ramps up in a progressive manner. It never feels cheap or provoked. When you die, you can revive after viewing a 30-second ad. If you don’t want to see it, then you can restart the level. Even though it is a free game and there are a million places where the developer could have put ads, it decided not to overdo them, for the benefit of customers (and itself).

However, I feel like some aspects of the game are not presented correctly. For example, the cards that appear in the middle of the game say that they will increase your attack power, but it took a while for me to realize that it was only a temporary boost. The aspect of the energy bar seems tiny and irrelevant until you realize that your bar is depleted and you can’t play anymore. Otherwise, the variety of characters, enemies and boss fights is really enjoyable, provides a lot of replay value and keeps you from getting bored.

The game features voxel graphics throughout all of its sprites. Unlike other games, this style is consistent throughout the game artwork-wise. However, the font it uses is normal-styled, which creates a bit of a conflict with the rest of the graphics

Anyways, the sprites all look good and have lots of colors. This make the whole battlefield very colorful and animated. Monsters sometimes are difficult to identify (as in “What the hell is that?”) but, once you get the hang of the game, you’ll start calling them “thing that throws arrows.” Sure, we would love to see a style other than voxel, which has been done by hundreds of games, but at least the graphics serve their function in a good way.

I love the music in this game. Many levels have nice background music, and it changes depending on the field you are fighting in. The boss background song is very dramatic and easily my favorite part of the soundtrack.

Sound effects are, in my opinion, best when you barely notice them, since that means they’re an addition to the game and not a distraction. That is the case in Cube Knight, where sound effects are to the point and effective.

There are some ads present in the game, but most of them, if not all, are voluntary. There’s almost no instances of ads being shown without your consent. There are no full-screen video ads after finishing a level, which is absurdly common in games these days.

You can even use them to your advantage to revive when you get killed. Other than that, it is fairly uncommon to encounter ads, which, in my opinion, enhances the chance of me spending money in a game. Props to the developer for that.

There are several options you can manage in the game. These include showing or hiding the tutorial, toggling the sound/FX, push notifications (which, if turned on, will nag you periodically about coming back to the game), and size of the controllers.

There’s also an option to change the display language, in case you don’t speak the Common Tongue. There’s no High Valyrian available, though.

Cube Knight manages to surprise with its fun, relaxed gameplay, while providing some depth that increases replay value. Some very minor flaws can be found, such as the font not corresponding to the graphics and some lack of information regarding some elements of the game, but overall, it manages to keep you entertained for long periods of time (or until you run out of energy). It also has the advantage of not requiring internet connection all the time in order to be played. If you fancy a shoot-’em-up game with medieval tone and RPG elements, then definitely go for Cube Knight.

Download and install Cube Knight from the Google Play Store.