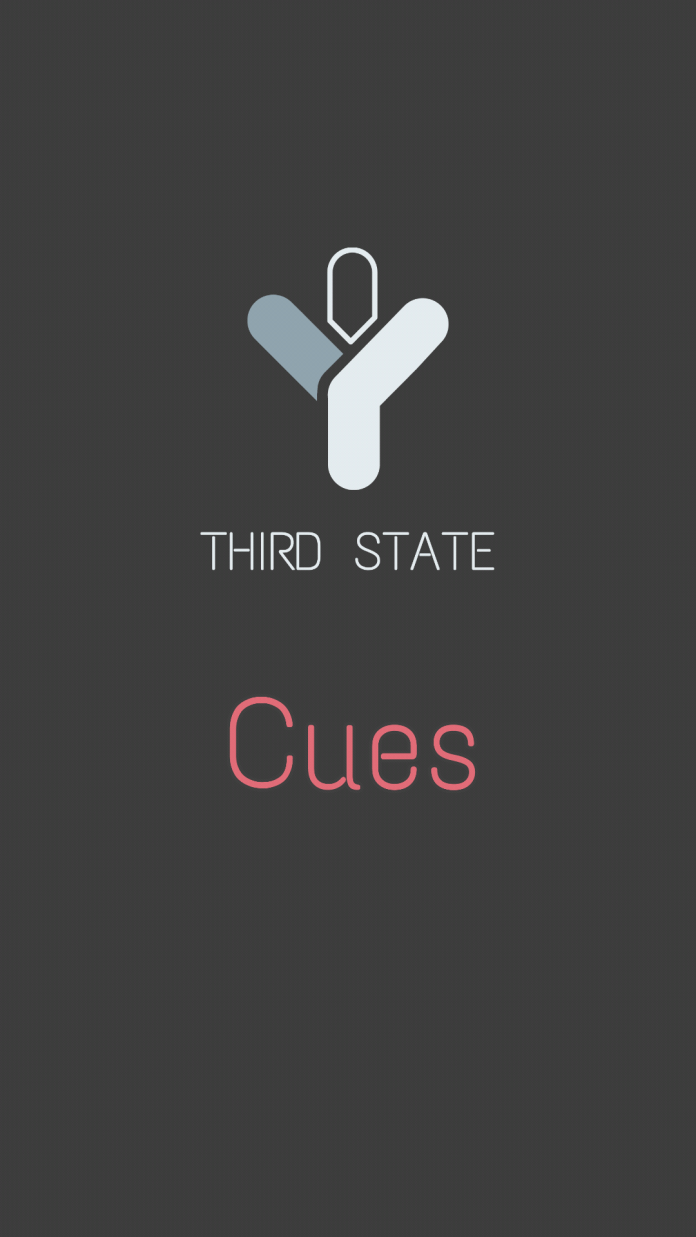 Some mobile games try to create multiple levels of depth in the player’s experience, requiring long tutorials, along with a big investment in experience in order to gain true ability.
Others go the other direction, giving you an extremely simple premise while keeping you on your toes throughout the experience. Such is the case with Cues, from the developer Third State Studios. Cues is a very family-friendly game (my kiddos & I have both spent hours playing this title), and is extremely easy to pick up and learn, but doesn’t get boring after a while, either.

Setup for this game is super-simple; just download from the Play Store and open. Upon opening you are greeted with a single-screen tutorial on how to play. Think of this game a geometric billiards.
You are presented with a 5×5 grid of tiles, with three items located on three separate tiles: a cue, a ball, and a pocket. The objective is simple enough: you tap the cue to hit the ball into the pocket. If you’ve played pool/billiards before you already know what to do.

You’re probably wondering…what’s the twist? The twist is in the math of this game. You see, the ball will travel the same number of tiles that the cue’s distance is to the ball. If the cue is 2 tiles away, then upon being struck the ball will travel 2 tiles itself. Again, the first couple of levels bear this out and make the objective very clear.

But they also introduce another wrinkle: in subsequent levels the number of cues on the 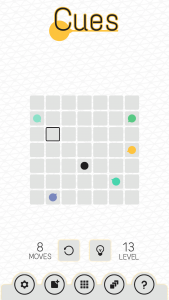 grid vary; and they require you to figure the correct combination of cue strikes in order to get the ball in the pocket. This includes using the same cue more than once, and sometimes using the same more than once in a row. With these multiple cues also comes a shot limit per level, so you are confined to a finite number of shots to succeed.

If you do fail (either by maxing out on your shot count, or by shooting the ball clear off the grid), you simply start over on that level. You get unlimited retries, and boy sometimes you feel like you may need them. Again, the thinking required here isn’t extremely strenuous, but you also aren’t going to breeze through these, either.

As you move along, you are introduced to other added ‘features’, including what I’m 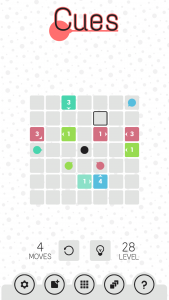 calling “bot tiles”, that have a number and direction imprinted on them. Upon striking the ball to these tiles, the ball is redirected in the direction and distance as shown.

Another cool feature of Cues is the Level Maker. Level Maker is exactly what it sounds like; allowing you to create your own playable levels. After playing the game for a while the kiddos would love to take on the grid themselves, and challenge siblings, friends, and parents to solve their diabolical creations. :)

Cues has a very clean interface, with spotty white background that slowly and continuously moves….this actually helps with eye strain, in my non-professional opinion. It’s strange to say, but this small detail allows for longer playing time I believe. Other than that the screen is pretty nondescript. 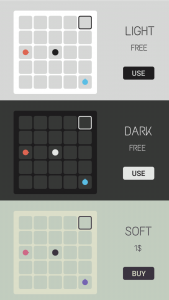 Along the bottom you have a settings button (audio, volume, vibration, buy options), and a level menu in which to pick from any level you’ve previously beaten. You can also pick from several themes: light & dark are free, but others such as ‘daisy’ and ‘graphite’ are $1 each.

The game runs a continuous zen-type of musical background, with a metronome ticking sound to help settle you into a focused state. The music doesn’t blow you away, but it’s also neither annoying nor totally flat. It’s just, nice.

When winning a level, you are greeted with a sudden change to a piano-like melody, while the screen animates to feel like you’re flying into the same pocket the ball just entered, going to white and then fading directly into the next level.
If you lose a level (again, by maxing out your move count or shooting the ball off the grid), you just get a simple message with a vibration in your device, and are quickly taken to the beginning of the level once again….no animation or screen change.

I really enjoy Cues. I say ‘enjoy’ as it is still on my phone for my kiddos & I to play. Even though we’re pretty high on the level list (there are 75 total plus any you make yourself) and each one is fairly taxing to solve, that next level still appears very approachable and therefore solve-able. It keeps us coming back for more.