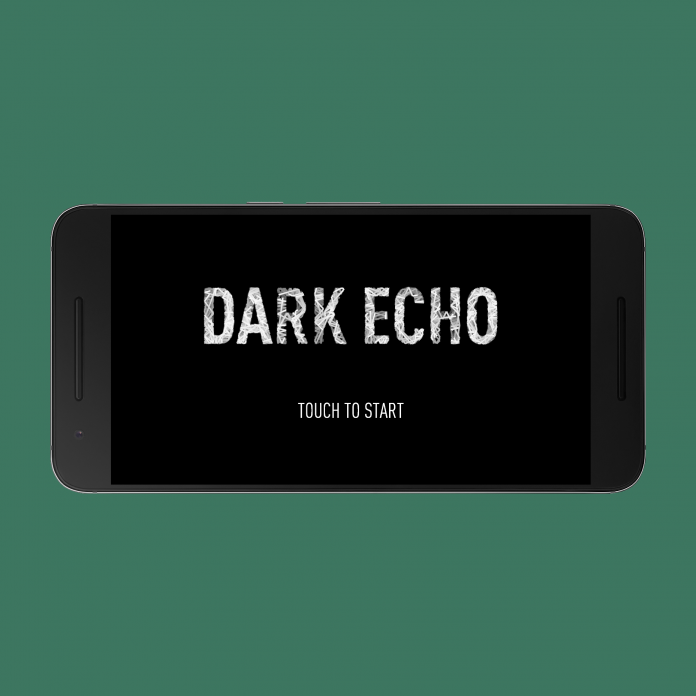 When you see the first games coming out for the Play Store, and compare it with the games we currently have, we can see how much more advanced they’ve become. Graphics, in particular, have come a long way if you analyze games that strive to look as realistic as possible. However, as we all know, graphics are not everything in a game. Dark Echo is aware of that; it creates a superb atmosphere with outstanding sound effects and little more than a black screen.

When you first launch the game, you will not be greeted with the sign-in process for Google Play Games. You could wrongly assume that Dark Echo doesn’t support said service, but in reality, it does.

To actívate it, however, you need to head to the game’s settings and sign in manually. It’s a weird way of doing things since I believe developers have determined that the first launch of the app is the perfect place to do it. It still works though, and it lets you earn achievements through it.

Anyways, the game will welcome you instead with a very small tutorial. Since the game’s controls are absurdly easy, there’s no need for much more than this.

Even though Dark Echo could look like a very simple game at first, it has a lot of depth thanks to its unusual gameplay. You control a character that you actually can’t see because everything is dark. Instead, you rely on what you hear and the echoes your sounds make against objects to determine the direction you should take.

To move, just tap in that direction and your shoes will make a sound for each step you take. You will be able to see the echo bouncing through walls and hazards, making it very tense because you don’t know what is ahead of you until you move.

When there are only walls around you, the echo will be white. However, there are hazards, water, and switches that you need to take into account, and these will all have different colors to identify them. When enemies are following you, the game will display a red hazard around you.

The approach of not being able to see your own character in-game is unlike anything I’ve seen before, and, combined with the fact that there’s no easy way of seeing what lies ahead, the game can be very tense at times.

Regarding difficulty, at first, stages are pretty easy and straightforward. However, things can get ugly fast, and then a lot of patience and good timing is required to go through the later levels. Nevertheless, you never feel like your deaths are just because the game is being cheap, but rather a consequence of your own mistakes.

In a world in which game developers try to create high-quality worlds with an impressive amount of detail and enticing backstories, Dark Echo relies on you to build up its world. I imagine the world being a dungeon very similar to a jail. I’ve read that other people think about it as a mine or as a cave similar to what you would find in RPGs. It’s up to you to decide in which setting you are playing, and that’s something very few games are able to provide nowadays.

Also, the game tries to build a story through the names of the stages. Don’t expect anything mind-blowing, though, but it is nice to have some kind of story to string the stages together. There’s also a more difficult mode when you finish the game, providing added replay value.

Because of its little reliance on graphics, Dark Echo does not feature flashy artwork or similar. Instead, a lot has been done to refine the core gameplay. This isn’t a bad thing, though. Graphics in this game help to enhance the gameplay in a significant way, and the lack of high-quality graphics does not hinder the overall experience at all.

Sound, however, is clearly one of the priorities set by the developer. This emphasis on sound effects is evident right from the beginning, where the game reminds you that your experience will be greatly enhanced if you turn up the volume of your device. Using headphones will be even better, though.

The sound effects are absolutely superb and they aid a lot in creating the tense atmosphere that Dark Echo tries to achieve. The echoes, the footsteps, the enemies, everything is done in a top-notch way. Normally sound effects are done in a game to add to it, but here, they are such a big part of the game that their execution could make or break the game. Fortunately, the dev team did a splendid job.

While most games try to improve graphics to create more impactful and visually impressive worlds, Dark Echo focuses on sound effects and almost no visual feedback to create an immersive experience that can get very tense but rewarding at the end. The idea of having to decide your movements based on sound only (and sometimes, intuition) makes for a very engaging gameplay and provides a pleasing experience. If you are looking for something out of the ordinary, then Dark Echo is exactly what you’re looking for.

Download and install Dark Echo from the Google Play Store.