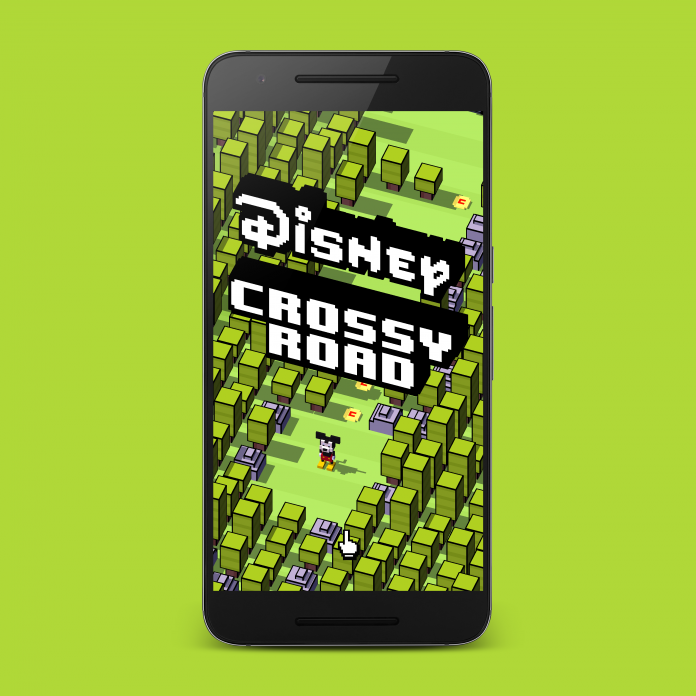 People like to torture themselves with challenging games. It’s a fact of life. After surviving tears-inducing gameplay in the NES era, games became gradually easier, but, ignited by Demon’s Souls, hard games have a home again among console gamers. Mobile games are no exception. Games like Temple Run and Flappy Bird infuriated us to the extreme, but we kept coming back to them anyway. Crossy Road is one of the latest examples of challenging games we love, and Disney has partnered with its developer to bring us Disney Crossy Road.

Being a family-friendly game, Disney Crossy Road warns you about in-app purchases and the possibility of watching video ads in exchange for in-game currency. In order to continue, you need to enter your age.

If you’ve played Crossy Road before, then you already know the basics. If you haven’t, then let me tell you that the premise is really simple. Your mission is to guide your character as far as you can through a scenery full of obstacles and moving objects. It’s similar in concept to an endless runner but you have more control over your actions and movements.

The game keeps everything very simple with dead-easy controls. The scenery is divided into an imaginary grid, and you can move your character one space at a time. By making quick swipes in any direction, your character gleefully jumps in said way. You can also tap wherever you like, and your character will move forward.

Of course, the game would pose no challenge at all without obstacles. This is where things start to get interesting. There’s a vast array of elements that will try to stop you from reaching your objective (sadly, just like in real life). You will have trains storming through the field, cars that could care less about speed limits, and water segments with floating logs.

The problem comes from the fact that if you wait too much time until your next move, an eagle will soar through the sky and capture your little, helpless character. Not only you need to avoid obstacles to progress, you have to do it quickly, or you’ll die anyway, making the game a constant fight against both the clock and your highest score.

You will also see some yellow circles scattered throughout the land. These are coins used to buy new characters. I thought at first that a new character would only change the coat of paint of your figurine. Turns out, changing a character changes the whole setting. The scenery color, the obstacles, and the music change completely.

Characters are classified by the movie or series they come from. For example, Mickey and Donald Duck are classified under “Mickey Mouse and Friends” (obviously). But, there are also characters from other famous Disney movies, such as The Lion King, Tangled, Wreck-It Ralph, and Disney’s newest hit, Zootopia. Choosing Simba will change the setting to a jungle-like world, in which cars are replaced by animals, while choosing Ralph will turn everything into pink candy and racing cars, just like the movie. It’s a nice touch that works amazingly well and encourages the player to get more characters.

The options provided by the game are nothing to write home about. Some basic controls over music and special effects are there. Also, you can access Disney’s website from here. The game has been translated into 15 languages, but the language isn’t detected automatically. Instead, you need to access the options screen and selected the button with a world icon on it.

The game also offers Facebook integration to share your scores and similar. For those looking for Google Play Games, you can connect the game to your account, but the integration is limited to five achievements, all of which deal with character collection.

First things first: I found this game to be hard. Not in an unfair way, but the sheer number of obstacles all moving at different speeds combined with the eagle that carries you away if you’re not fast enough, provide a challenging but rewarding experience. You have to analyze a lot of stuff quickly, but when you do and it works, it feels extremely pleasant.

The fact that the world changes according to the character you choose is a welcome addition, too. I thought at first that I had seen everything to this game after some rounds, but then I got a new character from Tangled and the scenery changed completely, all with new hazards, songs, and background. It’s nice to see what new worlds have to offer, and it adds a lot to the game’s replay value. You don’t need every character to see all of the available worlds: having one from each series is enough.

However, once the novelty wears off, you may find that there’s not a lot of things to do. Sure, there are more than 100 characters to collect, and you can always improve your high score (which is a motivation in itself), but things like daily challenges, timed events, or leaderboards through Google Play Games would add a lot to the game. Right now, other than collecting characters, I feel it’s way too simple and doesn’t give you enough motivation to keep you coming back for more.

Also, I found some rare instances in which the game lagged a little bit on my Nexus 6, especially when doing a lot of movements very close to one another. Not a big deal, but in a game that requires quick reflexes and swift movements, a performance issue could be the difference between increasing your high score or have your character drown after missing a floating log.

Graphics for this game are great. All of the elements used follow closely a blocky, almost Minecraft-like appearance that looks extremely good. Since this is a family-friendly game, when your character is smashed by cars or animals, there’s no blood at all. Your character will get reduced to a pile of pixels that will not traumatize your children.

Even though blocky elements can’t provide a lot of detail by nature, obstacles and other elements scattered throughout the land are really well done. Be it the bullet train in the Mickey Mouse and Friends world, the animals in The Lion King setting, or the ghosts in the Haunted Mansion backdrop, everything looks very refined and is pure quality.

Music and sound effects are really cool too. Like mentioned before, there are several tunes included in the game, one for each world. Sound effects are fine and add to the experience. The game also triggers an audible alert when you reach certain scores, which can be startling at first, but useful once you get accustomed to it.

Crossy Road is undoubtedly one of the biggest hits to come out of the Play Store, so it’s no wonder Disney decided to partner up with the developer to release a spinoff. Disney Crossy Road retains the same challenging gameplay of its father, while adding several interesting elements, such as new worlds, and more than 100 characters to choose from. Sadly, the game doesn’t offer a lot of replay value. However, it’s still a solid game that can keep you entertained for a lot of time while you explore all of its worlds and try to dodge its carefully-placed obstacles in order to get the highest score.