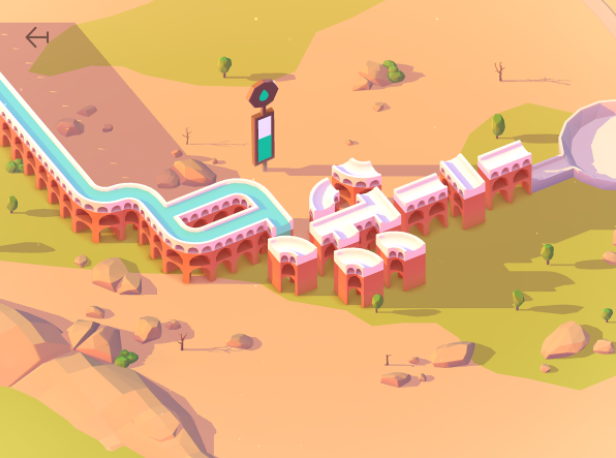 Aqueducts, at its core, is a game about transporting water from Point A to Point B by means of spinning pieces of pipe accordingly. Completing the path rewards you with a rating, determined by the number of moves it took you to get the water to the end.

When you first load up Aqueducts, I advise you to prepare yourself – it throws you right into the first level, and there a moment of absolute PANIC as you try to figure out what you’re supposed to be doing. After that terrifying moment passes, though, you realize that this particular level is not rated by time, but the efficiency. 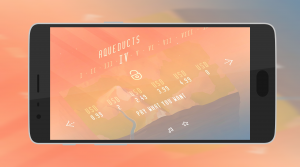 As you take a second to really look at the game, you realize that it’s quite beautiful. The graphics are vibrant and minimal, with a playful, almost quaint musical score. Everything about the game screams minimalism – there are, to wit, only two menu options in the entire app; toggle sound, and rate the game.

In all, there are nine worlds, each with 5-10 levels. There are really only two mechanics to concern yourself with – the number of times you move the pipes, and the amount of water you have to work with. And even then, you only ever deal with one of those at any given time. It’s a very simple, peaceful game that is casual to the extreme, almost to the point of sleepy – in a great, relaxing way. 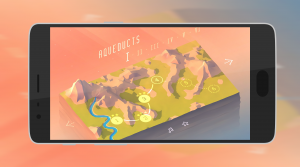 Worlds 3 and higher are pay to play, but with a pleasantly surprising catch – you choose what you want to pay for each level, up to and including nothing at all. You don’t have to pay anything to get all the content in the game, though I gotta say, if you don’t contribute at least a buck to the developer after playing this impressive little game, I don’t think we can be friends. The game is ad-supported, a video or picture ad playing every few levels. It’s really quite jarring, as the game itself is quite immersive. 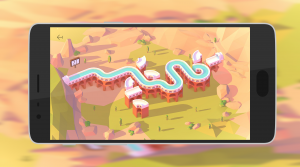 The optional payment for content system is a delightfully refreshing philosophy. It encourages the developer to make games their clients want to play, and are willing to pay to play. It lets the customer decide the value of the game to them, personally rather than the developer or publisher dictate the price. This pricing structure is one I’d love to see other developers adopt – but unfortunately, few developers are as noble as those of Aqueducts.