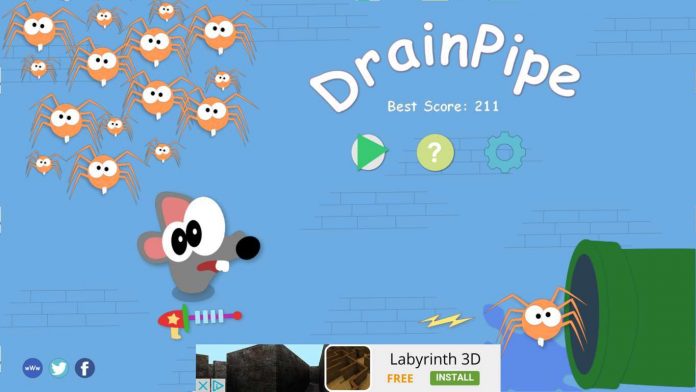 Drainpipe is a 2D arena shooter where you play as a rat, Ratfink, trying to survive against a horde of spiders in the sewers of the world.

Drainpipe is certainly an odd one. It has some clever humor and excellent music, but the gameplay itself is frustrating and the levels can spike in difficulty as you progress.

The controls are probably my biggest complaint, as you have to use the accelerometer/gyro to move your character but still have to tap and aim on the screen itself. This forced me to hold the phone in an odd position where I could both see and maneuver the phone, while still able to have the ability to use a finger to aim and fire, something I’m sure would look silly in public. A set of on-screen buttons would have made much more sense for the gyro controls, so I could hold the phone like a controller. Also, the stage navigation is a bit hit or miss, and collision detection for enemies is the same.

You have an assortment of powerups and weapons at your disposal, and a good amount of stages to play. The weapons are primarily powerups with two main items- the shotgun, and flashlight, being your handheld tools. The shotgun has limited ammo which runs out quickly, and after level one, it becomes weak and useless unless you get really good at dodging. I would have loved to see ammo drops appear, or at least the option for more varied and powerful weapons.

There are powerup drops, but they mainly consist of a new shotgun or flashlight, which only drives the spiders back and doesn’t hurt them, or health and bombs to so some area damage. The bomb is also kind of weak unless all the enemies are really close but, the freeze powerup is the best by far. There’s more to unlock as you progress, including some upgrades, but they aren’t exactly substantial. My second biggest complaint is the way you complete levels, by blasting walls away that block the exit. These things are bullet sponges and you need to juggle shooting spiders, the wall, and dodging, all with limited ammo and a timer.

On higher levels, the enemies do huge damage, and it makes for an extremely difficult and frustrating game. Sometimes I’d die within 2 seconds depending on how unlucky I was. I don’t profess to be a professional, but this game really is that hard sometimes.

There are some positives about the game, for sure. The music is excellent if a bit of a mismatch and the cartoony art and sound effects in the game. It’s pumping and a great listen, and the developers credited the artist so you can find it for yourself. Also, the humor in the writing of the game, especially in the tutorial, is cute and clever. The developers are aware the game’s concept is silly, and they use that to their advantage to get a few laughs out of an otherwise standard 2D shooting gallery.

Overall, I don’t think Drainpipe is my cup of tea, but there is certainly something there. It’s not completely unplayable and it has some good things going for it that may appeal to some. The music alone makes this game worth a look if only just to get the tracklist.