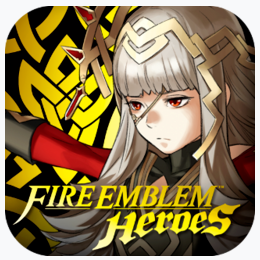 In the past, Nintendo has traditionally released games on its own hardware. When Nintendo decided to jump into the mobile space, it made a conscious decision to create mobile-tailored games to supplement software on its own dedicated gaming systems. One of the first games announced from this mobile venture was a new entry in the Fire Emblem series.

Fire Emblem has a long history dating back to the Famicom (Japanese NES) with Fire Emblem: Shadow Dragon and the Blade of Light which came out in 1990. Gamers in the U.S. weren’t introduced to the Fire Emblem series until 2003 when the plainly-titled Fire Emblem came to Game Boy Advance. From that point on Fire Emblem has slowly built up a fanbase across the world with a half-dozen follow up titles.

With the deep history of the Fire Emblem series, Nintendo has a rich cast of characters to bring to the mobile landscape with Fire Emblem Heroes. The turn-based strategy game relies heavily on character development and an intricately weaving story that plays out differently depending on how you perform on the battlefield and which relationships you choose to develop.

Fire Emblem Heroes follows in the footsteps of its older siblings with similar gameplay, similar art and music, as well as comparable sound effects. The gameplay translates perfectly to the touchscreen nature of mobile devices. Sorting and commanding your troops is very easy to execute by selecting your units with your fingertip and dragging or tapping nearby squares within the game grid. You’ll quickly learn how each unit type can attack and move within the gameplay area and how your turns throughout each battle play out against your enemies. The amount of variety in each battle quickly becomes apparent early in the game.

As you command the Emblian Empire against the Askran Kingdom, you’ll be able to summon “Heroes” you encounter throughout the game. Strategically choosing each group of playable characters allows you to command the battlefield to varying degrees. After completing a set amount of story missions you’ll gain access to special timed events, as well as fight against rivals around the world in the arena maps. Items that buff your heroes’ abilities can be obtained in arena battles as you make your way up the leaderboards.

I really have to commend Nintendo on its ability to focus on gameplay first with a lot of the titles its made in the past. Fortunately with Fire Emblem Heroes, the graphical presentation and overall package don’t suffer from this focus on gameplay. The entire package fits together nicely with an emphasis on classic gameplay.

The visuals in Fire Emblem Heroes are some of the best in the mobile space–especially when it comes to the fully pre-rendered cutscenes. Each character within the game is drawn with incredible detail and color. It’s easy to differentiate each character from the next because of the amount of detail each character employs. It’s also fairly evident from early on that care was taken in designing the world, the characters, and playing fields in Heroes.

Fire Emblem has always been known for great symphonic music. Fire Emblem Heroes follows suit with a wonderful soundtrack that brought joy to my ears every time I booted up the game. The music has a strong Japanese influence, but also integrates a fair amount of European classical flair to complement the visuals. All in all, Nintendo and Intelligent Systems have done a great job composing a strong soundtrack for Fire Emblem Heroes.

The story plays out in a traditional medieval setting. You play as a commander to the heroes that you’ll instruct on the battlefield. The dynamic between the player and the accompanied heroes plays out nicely with an introduction to each new battle. Menu systems are designed well but take a little bit to get used to, as there are a lot of options for the player. Navigating between the battle arenas, your home area and the shop is just a tap away at any moment and each section is labeled at the bottom of the screen.

Although Fire Emblem Heroes harkens back to the classic and appreciated gameplay of the games before it, it also has some new features that many current mobile games have employed. Among them is a currency system represented by Orbs within the game. Orbs that you collect through gameplay can be used to progress through missions within the game and there’s always an option to purchase more.

Fire Emblem Heroes does a great job of tip-toeing between a traditional handheld game and what many mobile phone games have become. It never forces you to pay in order to advance, but instead gives players the option to purchase items that provide benefit in various ways. I honestly prefer this setup over completely unlocking all modes from one larger payment as it gives the choice to really dig into the experience or occasionally hop into a few battles from time to time. In regards to that point, the battling is also streamlined to be much more bite-size in comparison to other dedicated games in the series. This fits nicely with the lifestyle that many mobile gamers have–occasional free-time that allows for a quick match.

There are also bonuses available to those players that choose to link their game to a Nintendo account. The ‘My Nintendo’ account system allows players to receive certain perks and discounts on digital goods that can be applied to Fire Emblem Heroes or other offerings from Nintendo. it’s a nice feature that few mobile games make use of and could be used to promote other Nintendo properties.

Nintendo/Intelligent Systems and DeNA have paired up to offer a wonderful gaming experience that encapsulates what’s great in both mobile and traditional handheld games. The entire experience is tied together nicely in a fairly approachable package that eases even the least seasoned gamer into the basics. This approachability along with a strong presentation and deep gameplay mechanics make Fire Emblem Heroes one of the best turn-based strategy games available on Android.