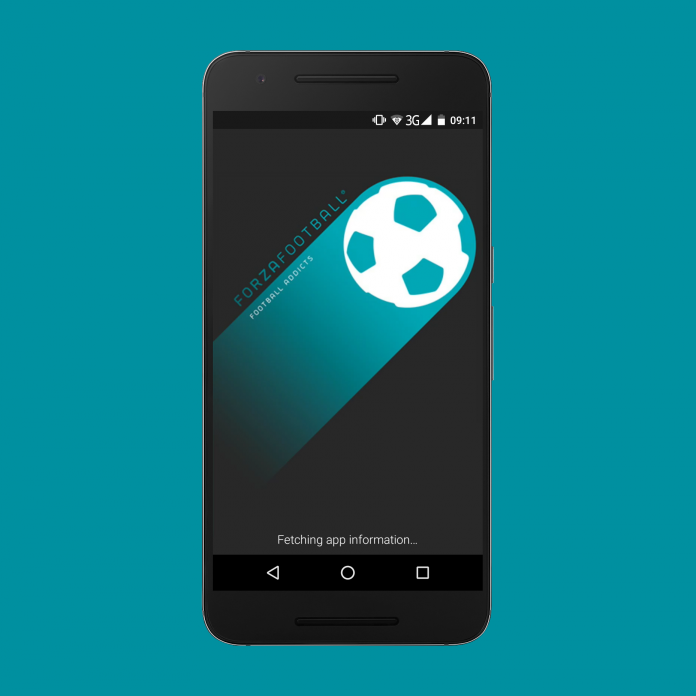 Being from Ecuador, you might safely assume that I’m very passionate about football. The sport is so deeply tied to our culture; it controls our plans and our mood. Football makes you travel throughout the country to watch your local team and, to me, it is as relevant as other stuff that is supposed to actually be important. That’s why Forza Football is one of the first apps I install on any device I own.

I can’t remember when the first time was that I used it, but it’s definitely more than two years ago. This app is, in my opinion, one of the best apps available on the Play Store. It doesn’t matter if you know all of your team’s chants or if you just follow Real Madrid because you like Cristiano Ronaldo, Forza Football will make your experience so much better.

After the splash screen, Forza will automatically detect the country you’re in and show you the leagues available there. This will add them to your favorite leagues, an essential feature of Forza, since it will let you follow them in the app itself.

I’ve always thought that this part of the setup is actually in disorder, since I have always expected to be able to choose a team from my local league afterwards. Instead, Forza redirects you to popular leagues around the world. This include the Premier League (UK), La Liga (Spain), Bundesliga (Germany), and even the Primera División from Argentina.

Immediately after, you’re allowed to choose international competitions. Important events such as the Champions League, Europa League, World Cup Qualifiers, European Championship, and Copa America are included here. Some of them are pre-selected for you – namely the really important competitions, so you don’t need to go and look for them yourself. The selection here is truly astounding.

After this, you get to choose your home country’s national team, as well as your local team. See what I mean? The order is kind of weird. The national team comes pre-selected for you, and it also can include U21 and women national teams, which is cool. Choosing a team from this list, either local or national, will turn on notifications for the matches of that team (more on this later). You can choose more than one local team, of course, but do you seriously want to do that?

Forza’s setup seems like forever, right? Now it’s the time to choose teams from all around the world. There are some popular options here, such as Juventus, Arsenal, Barcelona, Real Madrid and Bayern München. If your favorite team is a bit more obscure though, you’ll have to go to the settings page later and add it manually.

Finally! Forza will show you the screen you’ve longed for since we started this setup. A calendar strip is at the top, in which the current week will be displayed starting from Tuesday. This actually makes a lot of sense, since some leagues play some of their matches on Monday.

The rest of the screen is divided in two: your favorite teams and your favorite leagues. If a team you follow plays on the selected date, it will appear first and foremost so you won’t miss it.

If there are matches on the competitions you’ve followed, then they will appear below your favorite teams. These won’t filter by teams or anything: all of the matches played on that day valid for that league will appear here.

Tapping on the calendar icon at the top right will take you to a list view of the matches your favorite teams play in the next weeks. If you want to stop filtering your favorites at the top and just show everything according to their league, you can do that by tapping the switch at the top. If you only want to see live matches, there’s a button for that. There’s something for everyone here.

Tapping on a match will take you to the match view screen. This area is focused on a specific match, and the amount of information it shows is impressive. Also, it changes according to the phase of the match: fixture, currently playing, or played.

Statistics show live information such as possession, shots on target, yellow cards, and such. Table information shows the current standings in the table for the tournament this match is being played for. For example, if Arsenal plays Tottenham for the Premier League, then this tab will show the full Premier League standings.

This is updated live: this means that if Arsenal is winning, the table will already have the three points added to them. Both teams playing are shown in bold so it’s easier to spot them.

The match details tab is the most complex of them. It shows information such as the managers, age average, tendency, and stadium. When the match is being played, information such as yellow cards, red cards, goals, penalties and substitutions will also appear here. When the match is over, you can choose players of the match, and a small poll on confidence on chairman, squad, and manager of the team you support.

The videos tab will show you highlights (such as goals, failed penalties, and other important actions) from Dailymotion. This tab’s quality obviously depends on the match you’re watching. If you are looking at a Barcelona vs Real Madrid, then expect to see a lot of them. If you’re following a match from two obscure teams from Ecuador, then don’t expect any videos (even people in Ecuador don’t care about them anyways).

Finally, the squad tab does exactly what you expect of them, showing the starting 11, then showing substitutions and injured players. Special mention to Jack Wilshere, who always finds his way to this last section. 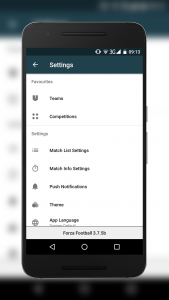 There’s a wide selections of options you can choose from. You can change your favorite leagues and competitions, manage what content you see on the details of a match, app language, notifications, and even support for themes.

The favorite leagues and competitions aspect is pretty much what you would expect. You can choose between every league and competition the app has to offer, and then mark it as favorite so you can see it on the main screen. The option of adding new teams is there too, in case you need it.

Themes range from really good to really ugly, but the fact that there’s actually an option for changing the colors of the app is nice. This is not a quick attempt of doing things either; when you change your theme, even the smallest of details change. It’s amazingly implemented and consistent throughout the app.

This is one of the biggest aspects of this app, without doubt. In a nutshell, they work flawlessly. Remember all of those teams we chose on the setup and options screens? Well, you can get push notifications when these teams play.

There’s also the option of choosing with notifications you get: match reminder, lineups, match start, match end, goals, half time result, final result, yellow cards, red cards, video highligts, and even questions and transfer news about the team. You can do this for every individual theme or just set the default options on settings and use that here too.

The robustness and granularity of this system is something admirable. As I said before, I’ve used this app for approximately two years and I’ve had issues with it exactly once. It’s amazing how well it works, how each setting is remembered correctly and reflected immediately, how prompt the notifications are, and how every event is in fact picked up and reported.

Forza Football provides a wide array of options, features, customizability, and robustness that is rarely seen on an app, let alone a free one. It sounds cliche, but, considering the amount of stuff you can do, I can safely say that this is an app from football fans for football fans. Seriously, just go and download it right now if you’re a fan of football. I’m sure you wont regret it and your experience will be better.

30+ Must Have Android Apps for Football Fans