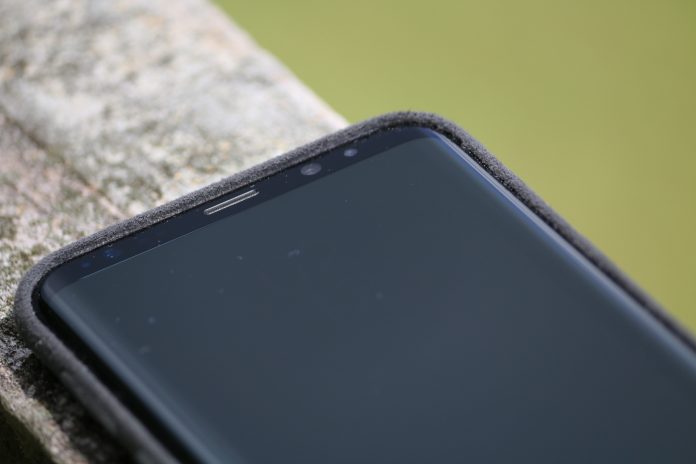 Yeah, we know that the Galaxy S8 and S8 Plus have already been out for some time, but that isn’t stopping folks from still picking these devices up today. In fact, with all of the issues surrounding the Pixel 2 XL, I’ve seen folks opt for the Galaxy S8 Plus as a replacement while Google figures out what’s going on with its displays.

This means that folks are still looking for the best cases for their shiny and new Galaxy S8 Plus, and that brings us to the options. While you can hit Amazon for some cheap, yet great cases, some will overlook the OEM cases that Samsung has created for its lineup of devices.

Starting off with the basic options, you can’t get much more basic than a silicone case for the Galaxy S8 Plus. Samsung’s own silicone case pretty much falls in line with what you expect from a case like this, while giving owners a bit extra. 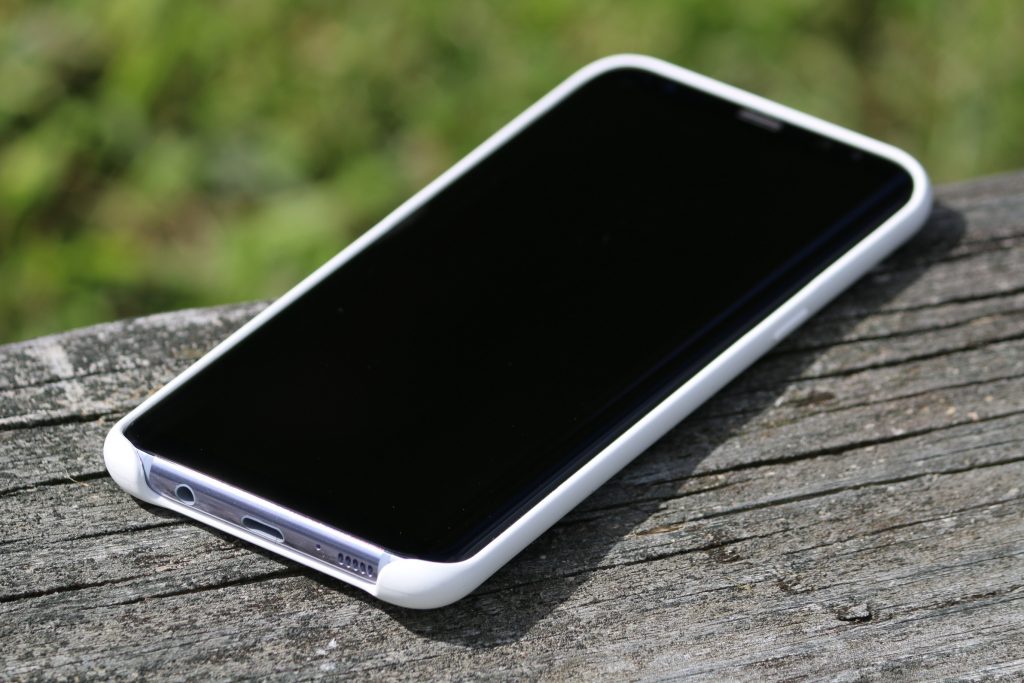 The outside of the case is made from silicone, making the device more comfortable to hold, and less likely to accidentally slip out of your hands. Around the sides, the silicone has been raised for all of the different buttons on the Galaxy S8 Plus, while the bottom of the case is cut out, altogether. This gives you easy access to the charging port and 3.5mm headphone jack, while not leaving you worrying about covering up the speaker. 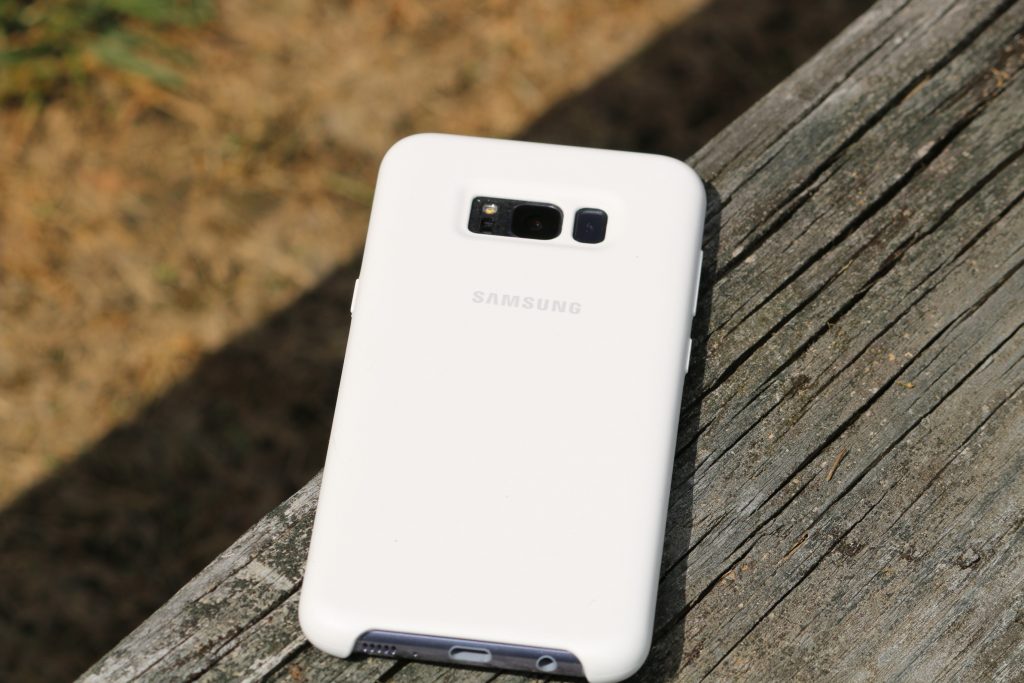 This makes life a WHOLE lot easier if you still like using the fingerprint scanner, or even if you need to use it when you iris scanning is acting funky.

Moving to the inside of the case, the Silicone option features a soft interior which will help keep your Galaxy S8 from getting scratched up with extended usage. The only gripe that I have here comes from owning the white version of this case. There’s definitely some concern about using a white case and keeping things look pretty after awhile.

Nonetheless, the Silicone case is a great option to consider, and you can hit the button below to snag one for yourself.

This is my favorite case that I have ever used with my Galaxy S8 Plus. The Alcantara case doesn’t look that impressive from the start, but then when you take it out of the packaging, you are immediately impressed. 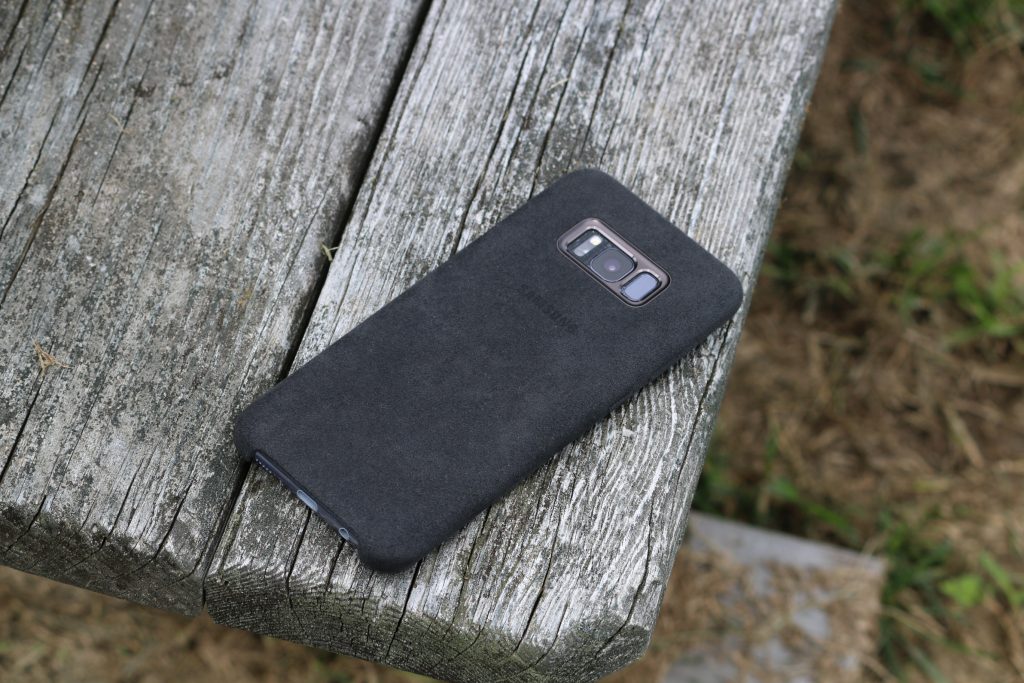 The Alcantara case feels like a sweater for your precious device, a feeling that is extremely welcome regardless of the situation. Obviously, this won’t be the case you take with you if you’re going on a hike, but when you get home and ready to go out for dinner, the Alcantara looks absolutely gorgeous.

As with the Silicone case, the camera cutout makes life so much better by making it easier to access the fingerprint scanner without smudging the camera lens. The buttons are raised just enough to make them clicky, but don’t protrude enough to stick out like a sore thumb.

Another recurring theme here is the cutout at the bottom of the case, providing easy access for the charging port, headphone jack, and speaker. The only complaint that I have with this case comes from the fabric itself. 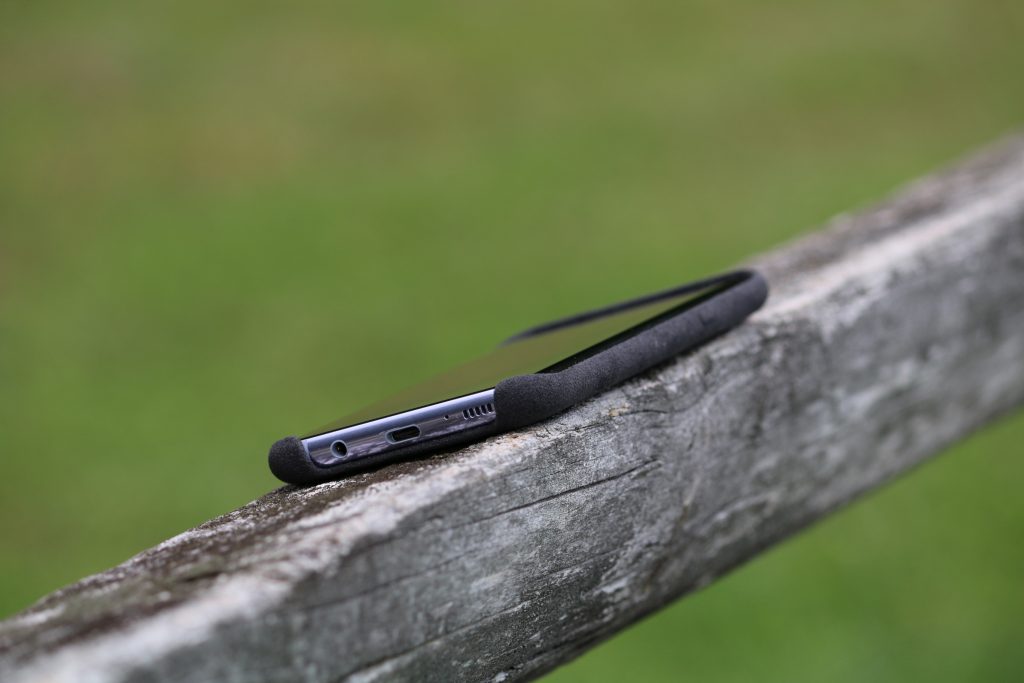 Over my extended usage period with the Alcantara case, I found the case shedding fibers occasionally. This would leave fibers on my display, forcing me to wipe them away from time to time. Hopefully, this won’t turn into a case of male-pattern baldness, but only time will tell.

Pricing may be a little steep for some as this is priced at $49.99, but in my opinion, it’s well worth it if you want to keep things looking good and don’t want a generic case.

Generally, I’m not a huge fan of flip cases, as I want to get into my device as fast as possible, and the same rings true with the LED View cover. While this case is rather durable, it’s just a bit too thick for my taste but does include some interesting use cases. 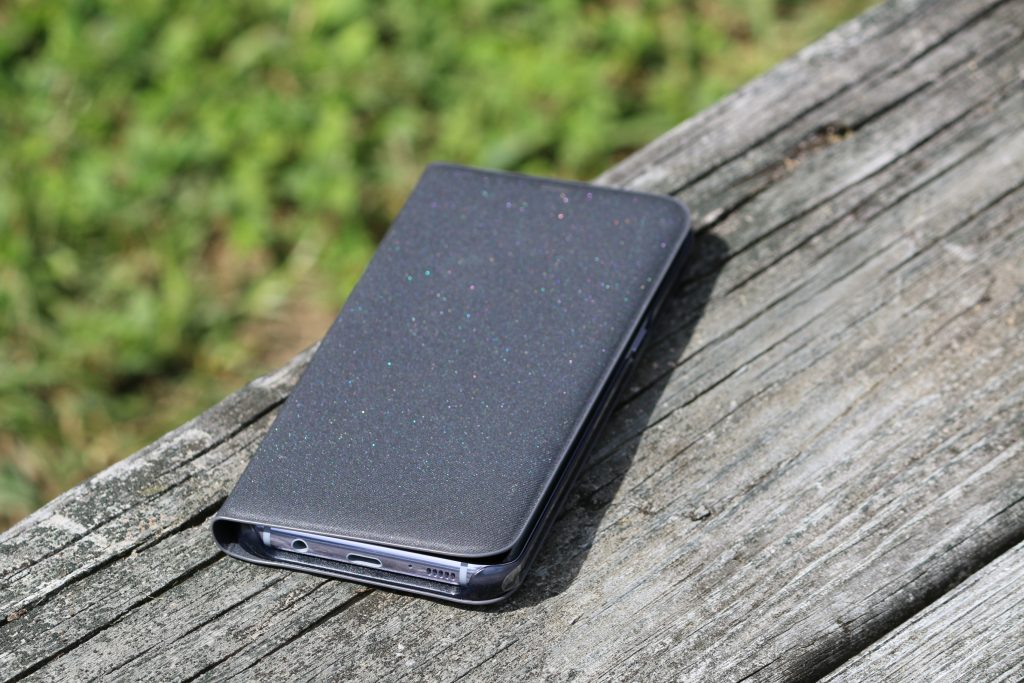 The LED View cover takes advantage of your display, while ensuring that you always know what time it is. Plus, whenever you receive a notification, the outer case will light up, letting you know what app the notification is coming from.

Moving around the case, there is a cutout on the front for the earpiece, and the side features labels for the volume up and down buttons, as well as the Bixby button. These aren’t actually buttons themselves, but let you know where to push if you need to silence a call or activate Bixby quickly. 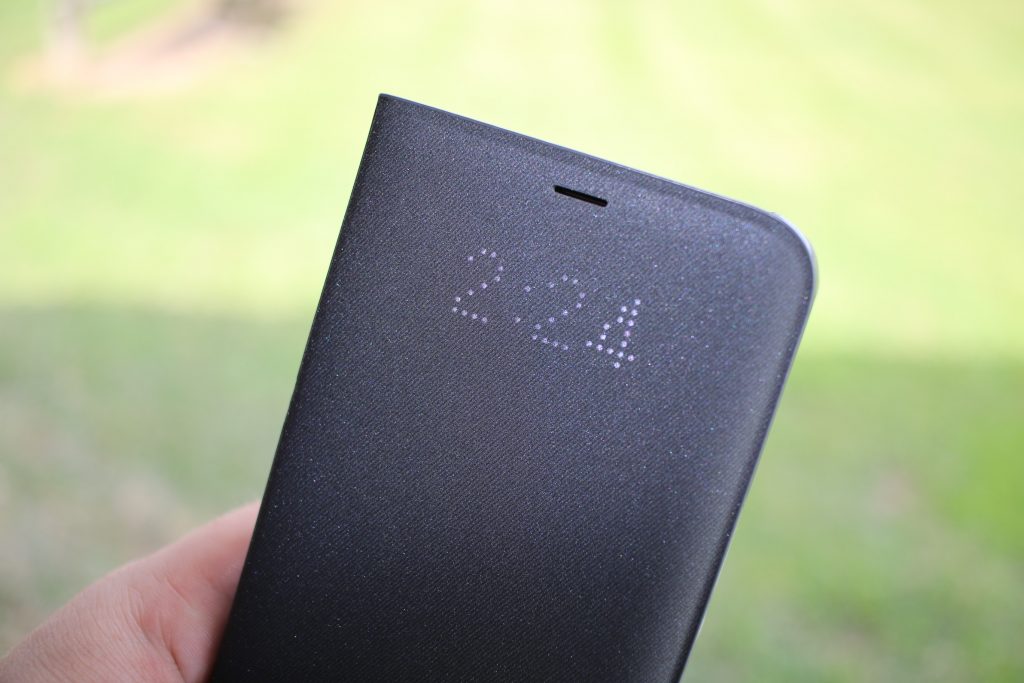 Flipping the case open, there’s a small cutout capable holding one or two credit cards (or an ID) if you want to leave the wallet at home and take advantage of Samsung Pay. There’s also some soft-feeling material on the inside of the case, again, helping to keep your Galaxy S8 Plus protected.

Around the edges of the inner case, there are cutouts at the top, bottom, as well as cutouts for the various buttons around the edge of your device. This is great for providing easy access, but is rather unlikely to keep the device protected if dropped from a substantial height.

This case threw me off the most out of the bunch, and is still one of the weirdest “cases” that I’ve used. I thought it was neat when Samsung announced the cover at the Galaxy S8 event, and you can definitely tell this is an attempt to appease those who have been wanting a hardware keyboard to use. 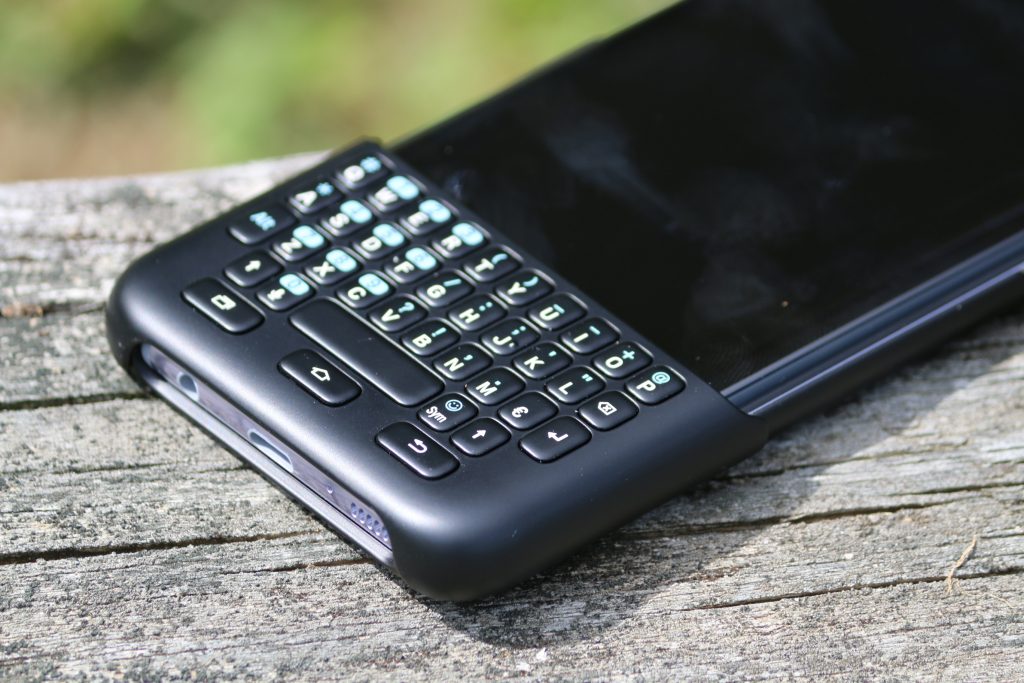 The Keyboard Cover actually comes in two pieces – the rear cover, and the keyboard. The rear cover itself is nothing more than a hard shell with cutouts for the buttons and easy access to the ports on the bottom.

However, some slight cutouts can be found on the sides of the hardshell cover where the keyboard portion will rest when not in use. When you’re ready to use the keyboard, you’ll need to (gently) pry it off the back, and then flip it around and attach it. 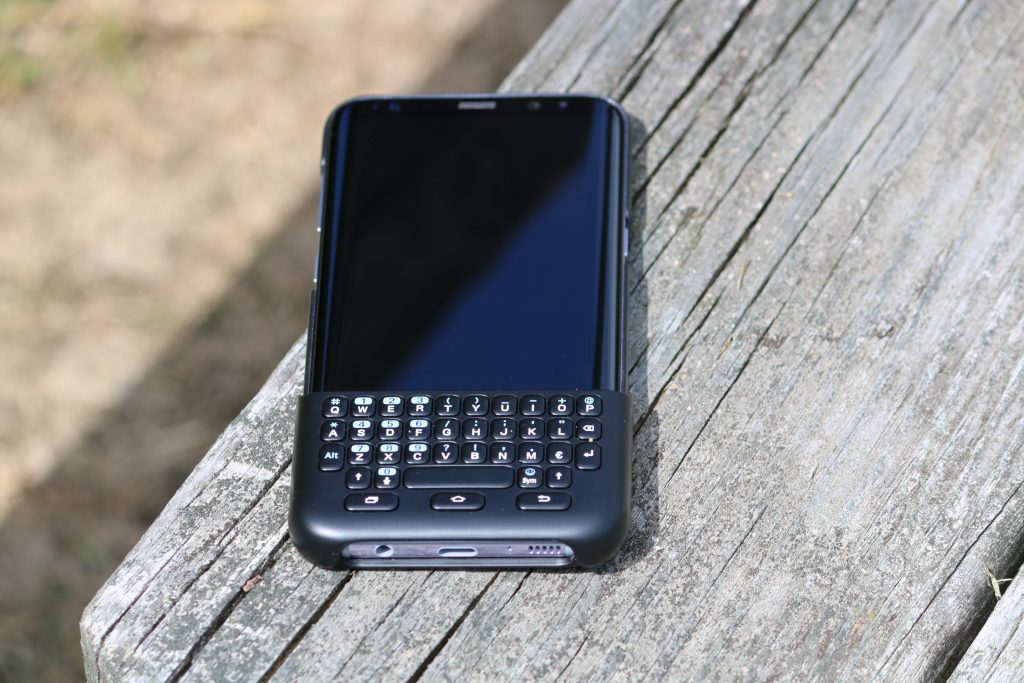 As soon as you attach it, you will notice your display moved up slightly to account for the space being taken up by the keyboard. General interaction is not impeded, except for the navigation buttons, which are now activated using the keyboard itself. Unfortunately, this is what drove me nuts the most.

Instead of being able to remap the hardware buttons (I know, I know), you’re stuck using Samsung’s backwards orientation of the navigation keys. THEN, when you are done using the keyboard, Samsung automatically reverts the navigation button orientation on your device, forcing you to go back into the settings and change things back to normal. 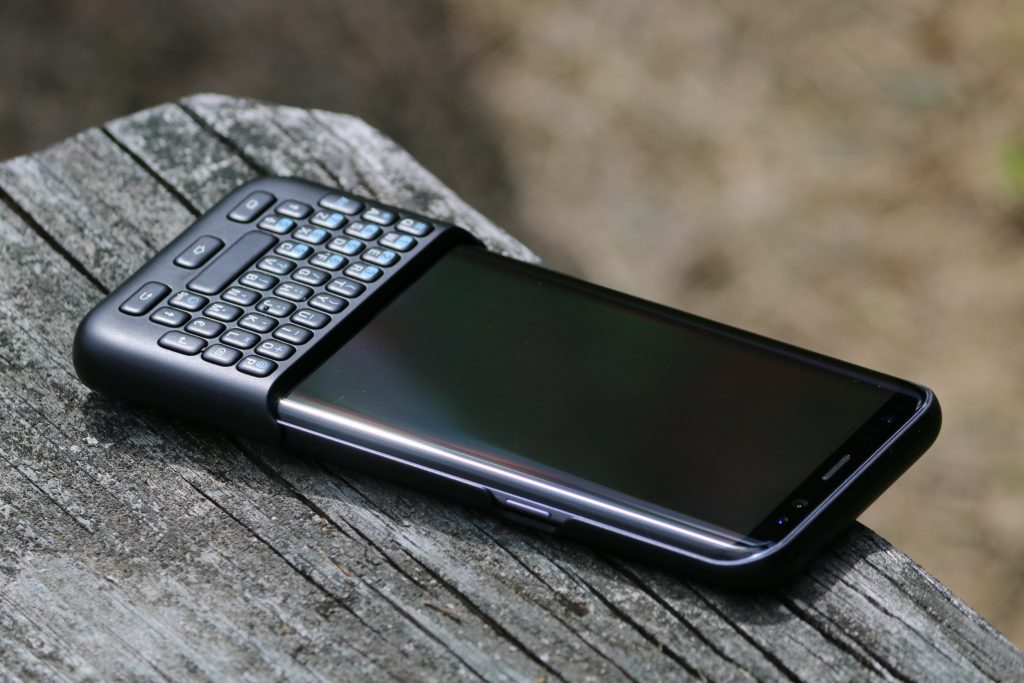 As for the keyboard itself, it’s rather tactile, and I was able to easily reply to some emails with minimal errors. That’s a pretty impressive feat considering the fact that I suffer from finger-itis, and have never had luck with hardware keyboards on mobile devices.

Nonetheless, if you can ignore the glaring issue surrounding the navigation keys, the Keyboard Cover is a viable option to give you the tactile feedback you want.

I love funky smartphone devices. I was a huge slider fan with the Palm Pre. I still enjoy the feel of an old-school QWERTY...