Glympse is a location sharing app, similar to Latitude, that allows you to share your location and estimated time to arrival with anyone.  Everyone likes to be updated on when their guests will arrive or if someone is going to be late.  With Glympse, you can easily get all this information without the creepy factor of Latitude following you around and updating your location on its own. 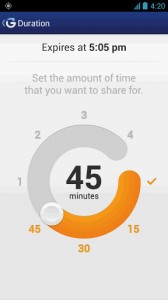 Glympse has no shortage of features, but let me first explain my usage.  I was picking my girlfriend up from the bus station.  She sent me a Glympse so that I could follow her all along her six hour trip.  Glympse’s map view is excellent as I could track when and where she stopped (I creeped her out a bit) or how fast she was moving.  When her bus was close enough, I sent her a Glympse of where I was and drove to pick her up.  We could view each other’s location on the map to get a sense of how close we were, and there was no worrying about when I would be there or whether I was stuck in traffic.

To send a Glympse, you first select your recipient.  You can select as many people as you like (I am not certain of a limit, but I know you can go over fifty people), and you can use social networks like Twitter and Facebook to add recipients.  Glympse also lets you broadcast your whereabouts via other apps you have on your phone like Dropbox, Drive, Tumblr, WhatsApp, WordPress  and other normal e-mail and SMS clients.

Next, you can select for how long you want your Glympse viewable.  This goes up to four hours, but you can add fifteen minutes or expire the Glympse whenever you like.  A nice, but maybe not so obvious, feature is that Glympse allows you to see if the other person is watching your Glympse or not.

[pullquote1 quotes=”true” align=”center” variation=”orange” textColor=”#000000″]We could view each other’s location on the map to get a sense of how close we were, and there was no worrying about when I would be there or whether I was stuck in traffic.[/pullquote1]

Finally, you can select a message and pick your destination.  Glympse will then send your location off to your recipients, and you can see who has received your location, how much longer the Glympse is viewable for, and make any modifications to it if necessary.  In this way, Glympse is completely intuitive and easy to use.

A few extra features Glympse has is the ability to favorite frequent contacts, see your Glympse history, add calendar events for quick sends, request a Glympse, and use Car Mode while you are driving.  Glympse also is not bound to one service that everyone has to have.  You can send your location via SMS, tweet, e-mail, and almost any other option so that others do not have to have Glympse to know that you are on your way.

Glympse is certainly one of the best and easiest to use location-sharing apps that I have tried. Setup is quick and intuitive, and it works as advertised.  My location was always picked up within a few seconds, and tracking my position was spot on.  If you are having a party or a meeting and you want to keep up with attendees, Glympse makes this extremely easy for everyone involved.  If you are a hiker, runner, camper, or something similar, you can give your friends the reassurance of knowing where you are and your anticipated return time.  We will be trying at least one more location-sharing app, but it will have a lot to compete against with Glympse.